Occasionally a prominent person’s life traverses an epoch so long that few can remember a time before they existed. Prince Philip, the now deceased Duke of Edinburgh and consort to the longest-serving British monarch, is one such man. He led a remarkable and long life (falling short of his 100th birthday by just 62 days), with much of it the focus of intense public interest.

While in recent years he had stepped back from royal duties, his death has touched off numerous recollections of his long association with Australia. From his first visit in 1940, as a junior British naval officer, he drew attention to what was to become his trademark dry wit and directness of speech and manner. He returned on many occasions, mostly in more formal surrounds, but never managed to completely temper his willingness to say what was on his mind, no matter the consequence. 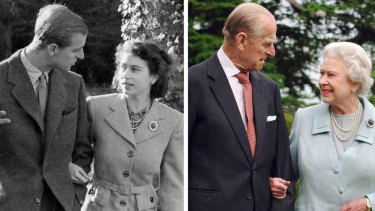 The Queen and Prince Philip, pictured in 2007, recreate a photo from earlier in their marriage.Credit:AFP

While his off-the-cuff remarks could be disconcerting – or downright offensive, as when he asked an Indigenous leader, “Do you still throw spears at each other? – his unconventional ways endeared him to many.

And yet, from the day he exchanged wedding vows with the future British Queen in 1947, he also managed to carry out with dignity and steadiness his principal role as supportive husband to one of the most powerful women in the world. It was a double act that endured for more than seven decades.

During the past few days many have also come forward to speak of his character, not just his service. Former US president Barack Obama eloquently reminisced of his first visit with the royal family “as two Americans unaccustomed to palaces and pomp”. In a touching tribute, Mr Obama disclosed that “the Queen and Prince Philip immediately put us at ease with their grace and generosity, turning a ceremonial occasion into something far more natural, even comfortable. Prince Philip in particular was kind and warm, with a sharp wit and unfailing good humour.”

Such humour was something he clearly needed. For all of the Queen’s accomplishments during her long reign, there has been more than one “annus horribilis”. However, through all the scandals, internal ructions and marriage breakdowns that afflicted their children, the Queen and Prince Philip’s dedication and loyalty to each other was surely a source of great assurance – that while together they stood, so did the future of the royal institution itself.

His passing does also remind us that for all of the Queen’s longevity her time as head of the family and the Commonwealth is coming to an end. For many Australians who have greatly admired the Queen, and were never convinced of the need for a republic while she still carries out her duties, it will be a moment to reflect on what the future might hold.

Whether the transition to a new head of state jolts Australia into finally taking the path to full independence – a position The Age has long supported – is no certain thing. But this event should trigger a full and frank debate.

It was the Queen’s biographer Robert Lacey who claimed that Prince Philip’s immediate response to the outcome of the 1999 republic referendum was, “What’s the matter with these people? Can’t they see what’s good for them?”

His passing may turn into another notable step towards that moment. For a man celebrated at least in part for having a strong streak of rebelliousness, it may well be a fitting legacy.

Note from the Editor

The Age’s editor, Gay Alcorn, writes an exclusive newsletter for subscribers on the week’s most important stories and issues. Sign up here to receive it every Friday.