The principal of a disadvantaged state school in outer suburban Melbourne pocketed almost $23,000 in school funds and spent the money on gambling and an overseas family holiday, in a case that has exposed poor oversight by the education department.

Victoria’s Ombudsman Deborah Glass revealed the theft in a report she tabled on Monday, which she said highlighted “systemic weakness in the financial governance of our schools”, rather than a systemic problem of senior staff stealing school funds. 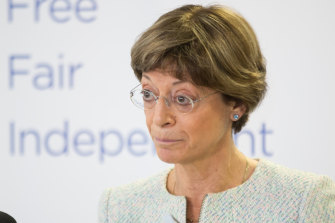 “I do not think many principals help themselves to school funds to support a gambling addiction and overseas holidays, having failed to disclose in their selection process they are a discharged bankrupt,” Ms Glass said.

According to the investigation, the principal asked his staff to counter-sign cheques for school purposes on multiple occasions in 2017 and 2018 and took the cash for himself.

The principal – who is not identified in the report – was employed on an annual salary of more than $143,000 but had financial problems, including a heavy gambling habit, and significant personal expenses including rent on inner-city apartments, private school fees and multiple investment properties in Queensland.

Some of the money he took went on a $40,000 overseas holiday he had promised his family.

The principal had a history of personal financial problems that he did not disclose when he was appointed, including a period of bankruptcy.

The unidentified school he led is in one of Melbourne’s growth suburbs and has a student population that is socially and educationally disadvantaged.

A departmental officer interviewed for the investigation described it as a “deep dive” school, which requires extra attention and resources to ensure it meets Victorian government targets.

The principal admitted to investigators that his appropriation of school funds for personal use “was a mistake and poor judgment”.

But he also blamed his behaviour on alleged bullying by another senior staff member, which he said had worsened his gambling addiction.

The investigation found no evidence to support this claim.

The man no longer works in the Victorian state school sector.

His theft came to light after allegations were made in 2018 to Victoria’s anti-corruption watchdog, the Independent Broad-based Anti-corruption Commission (IBAC), which referred the case to the Ombudsman.

The misuse of funds might not have come to light had the allegations to IBAC not been made, the report states.

Ms Glass said the report highlighted “an important and systemic weakness in the financial governance of our schools”.

“The Department of Education and Training missed red flags that might have uncovered some of the conduct sooner,” Ms Glass said.

“The principal in this case was able to get away with his actions for so long because the systems and controls did not work.

“The school’s business manager lacked the qualifications and experience to challenge him, as did the school council and its treasurer.”

Ms Glass found that Victoria’s “devolved” school system, which gives principals autonomy over as much as 90 per cent of their allocated budgets, carries risks that mismanagement can go undetected.

The Department of Education and Training also missed two opportunities to identify financial mismanagement at the school, including a query of two payments by the Victorian Auditor-General’s office and a departmental audit of school finances.

In this case, the query related to splitting invoices in breach of department procurement policies. The principal failed to follow these policies while procuring works totalling almost $700,000, then took steps to avoid detection.

The department has accepted all three report recommendations, including that it consider formally referring the principal to Victoria Police, that it strengthen its principal recruitment process to include better checks on preferred candidates’ financial management capabilities, and that it introduce a process for school council members to formally acknowledge their understanding of financial procedures that apply to their roles.

Ms Glass noted that this was the fifth report she has tabled on a school principal in recent years.

“I recognise that reforming a vast and decentralised system takes time, and mis-steps are almost inevitable,” she wrote. “But I cannot help hoping this is the last report I need to table about a principal’s misdeeds.”