Vladimir Putin has boasted that Russian Sputnik-V jabs are ‘as simple and reliable as a Kalashnikov assault rifle.’

President Putin said that while Western nations had developed ‘innovative’ vaccines, the Russian versions were dependable, like the widely-used automatic rifles of the Soviet Union.

He made the comment as Moscow unveiled its fourth virus jab called Sputnik Light on Thursday. 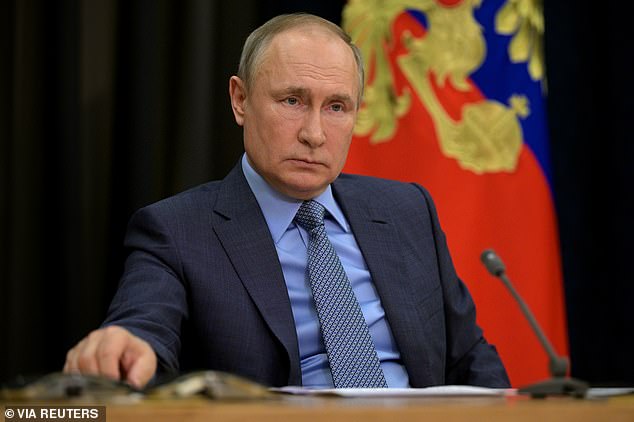 President Putin said that while Western nations had developed ‘innovative’ vaccines, Russia’s was simple and reliable, like the widely-used automatic rifles of the Soviet Union (pictured in Sochi on Thursday)

Putin also said he backed the idea of a vaccine patent waiver scheme which has been proposed by the European Union to the United States.

‘We are hearing from Europe an idea that, in my opinion, deserves attention – namely, to remove patent protections from vaccines against Covid-19 altogether,’ Putin said during a televised meeting with Deputy Prime Minister Tatiana Golikova.

‘Russia would of course support such an approach,’ Putin said, urging Golikova to work out the logistics.

Supporters of waivers for vaccines argue that poor countries are struggling to get inoculation drives underway while rich countries protect the intellectual property rights of pharmaceutical giants.

Russia has registered three coronavirus vaccines, and on Thursday approved a fourth – a single-dose version of its Sputnik V jab called Sputnik Light.

Moscow has actively pushed Sputnik V – named after the Soviet-era satellite – around the world, with more than 60 countries having approved it for use.

Russia registered the jab in August before results from large-scale clinical trials, but leading medical journal The Lancet has since said it is safe and more than 90 percent effective.

In addition to the Sputnik jabs, Russia has also registered two other homegrown vaccines, the EpiVacCorona and CoviVac.

In his meeting with Golikova Thursday, Putin said that while Western countries had developed ‘innovative’ vaccines, Russia’s are the safest and most reliable.

‘As simple and reliable as a Kalashnikov assault rifle,’ he said.

The Russian Direct Investment Fund (RDIF), which helped finance the vaccine, said in a statement that Sputnik Light ‘demonstrated 79.4 percent efficacy’ compared to 91.6 percent for the two-shot Sputnik V. 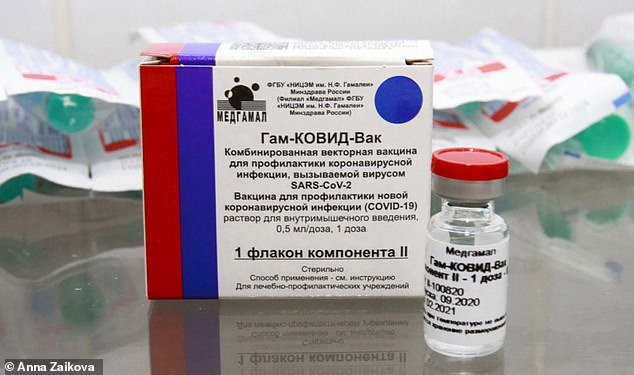 The state-run Gamaleya research institute, which developed Sputnik V, said Thursday that more than 20 million people globally have received their first dose of the shot.

Russia, however, has struggled to inoculate its own citizens since beginning its jab drive in early December.

Golikova on Thursday told Putin that 9.4 million Russians have been fully vaccinated, while 13.4 million have received their first dose in the country of 144 million people.

Polls show many Russians are sceptical of Covid-19 vaccines.

Last month Putin said he hoped 70 percent of Russia’s adult population will be inoculated by autumn and appealed for all Russians to get a vaccine.

The country has been among the hardest hit by Covid-19 with over 112,000 deaths as of Thursday, according to a tally by health officials.

But authorities have been criticised for downplaying the severity of the pandemic by counting only fatalities where the coronavirus was found to be the primary cause of death after an autopsy.

Figures released by the Rosstat statistics agency last week showed that Russia had actually recorded some 250,000 virus-related deaths by the end of March.