A Royal Air Force flypast led by an all-female crew will roar for the Lionesses today by soaring above Wembley Stadium ahead of the final.

A C-130 Hercules transport aircraft, with a crew of three, will be flanked by two Typhoon fighter jets before the 5pm kick-off. The planes will fly over at 4.57pm, immediately after the national anthems.

The Hercules will fly from RAF Brize Norton in Oxfordshire, while the Typhoons will take off from RAF Coningsby in Lincolnshire. 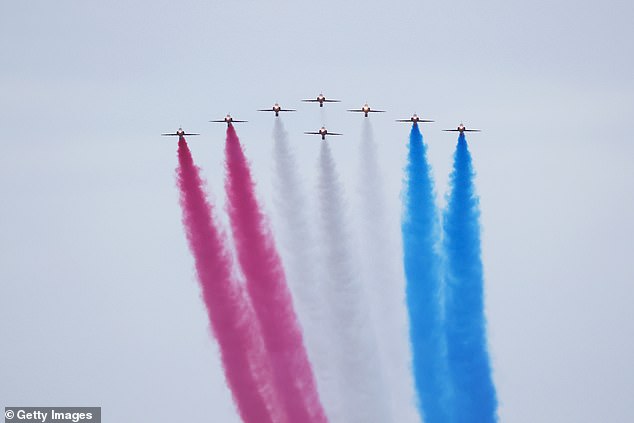 The Hercules will be captained by a pilot named only as Flight Lieutenant Lauren, who has been in the Air Force for 12 years.

She has deployed all over the world, including Afghanistan, where she helped train the first female Afghan pilots.

She said: ‘I am proud to be piloting the lead aircraft for the flypast over Wembley. I’ve flown missions all over the world, but this will be one of the most memorable.

It’s been inspiring to watch the Lionesses progress and I will be loudly cheering them on as soon as I land back at RAF Brize Norton.’