Dramatic footage shows the moment brazen thugs use a 4×4 to ram the front window of a jewellers before stealing items from inside the shop.

Kenya Jewellers, in Ealing Road, Wembley, was targeted by a gang of four people in two vehicles in the early hours of Sunday morning.

Footage of the heist, filmed by a camera on the Wembley Central Mosque located opposite, shows a black Range Rover being used to smash a hole in the front window before other thugs ransack the shop, which is located just half a mile from Wembley Police Station.

They flee in a blue Audi before two police cars arrive at the scene minutes after the front window was smashed.

The jewellers has been closed since the incident. 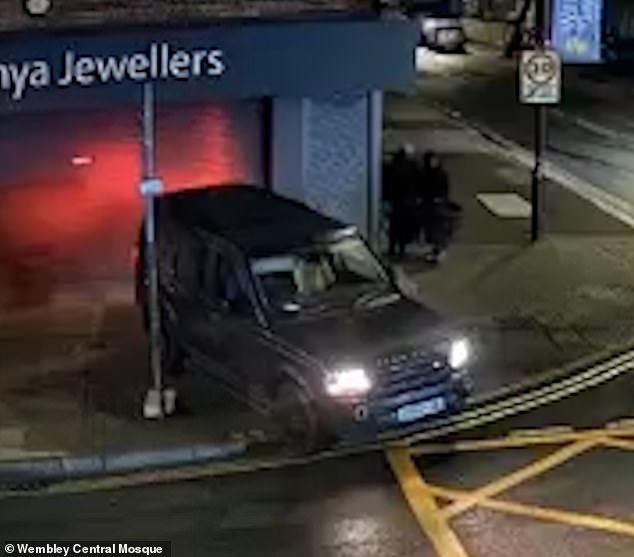 Dramatic footage shows the moment brazen thugs use a 4×4 to ram the front window of Kenya Jewellers, in Ealing Road, Wembley, before stealing items from inside the shop

In the footage, a blue Audi and a black Range Rover are seen in Chaplin Road where two people, holding what appear to be large buckets, get out of one of the vehicles and stand on the corner at the junction with Ealing Road, outside Kenya Jewellers.

The two vehicles turn right onto Ealing Road, where the Audi pulls up outside the shop and the Range Rover back onto the pavement to allow another vehicle to drive passed the scene.

The driver of the 4×4 parks on the pavement outside the shop, allows two vans and a car to clear the scene, and then drives out onto the road before reversing at speed into the front window of the jewellers.

Even with the shutters down, the front of the shop is completely destroyed by the vehicle which is now lodged smashes through the protective screen and through the glass window behind.

The two people who had earlier got out of the cars instantly run into the shop as the Range Rover is driven forward and parked up directly outside.

The driver, dressed in a blue hooded jacket and black trousers, jumps out of the car and rushes into the shop without closing the door to the car.

In reflection on what is left of the glass window, the Audi can be seen reversing up to the shop and the driver joins the rest of the gang inside, and helps take items back to the car.

After a few moments, another car is seen turning right out of Chaplin Road but does not stop. 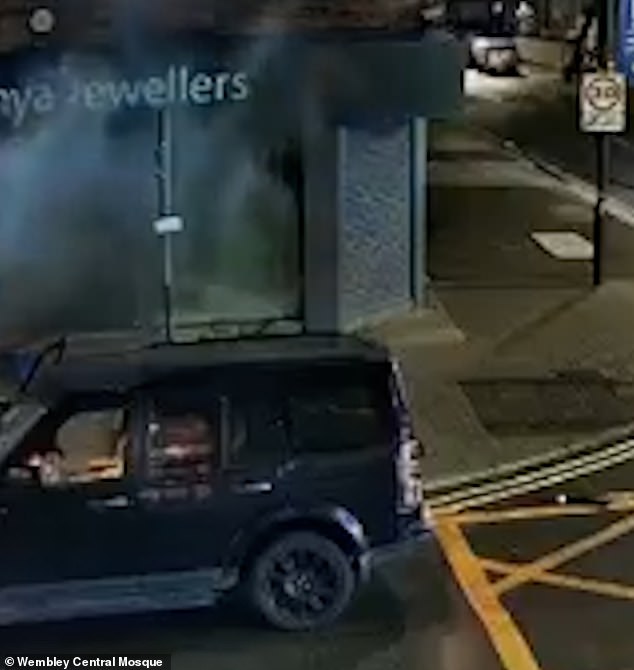 The thieves eventually run out of the now-smoking jewellers and jump into the blue car, leaving the Range Rover at the scene with its driver-side door still wide open and the windscreen wipers operating

Not fussed by the occasional passing vehicle, the gang continue ransacking the jewellers.

At one point, a man is seen walking on the opposite side of the road and appears to film the gang before walking on.

The thieves eventually run out of the now-smoking jewellers and jump into the Audi, leaving the Range Rover at the scene with its driver-side door still wide open and the windscreen wipers operating.

About a minute goes by before two police vehicles – an unmarked car and a marked car – arrive at the scene.

A note on Kenya Jewellers’ website says the shop ‘will remain temporarily closed due to an incident’.