An unexpected revelation by the RCMP about the early moments of a murderous shooting spree last April in Nova Scotia has prompted fresh criticism from families of the victims and their lawyers.

Although police initially said the gunman fled the scene of the first killings about nine minutes after officers arrived in the rural community of Portapique on the evening of April 18, they’ve now revised this description of events.

Listen for free to the Global News podcast 13 Hours: Inside the Nova Scotia Massacre

The RCMP told Global News in emails they now believe the gunman escaped roughly 19 minutes after the first responding officers arrived at the scene. The emails were sent in response to questions for a 13-part investigative podcast launched by Global News on Nov. 9.

Three families whose relatives were killed in the shootings told Global News police didn’t tell them about the new information. A lawyer representing the families in a proposed class action lawsuit also said she only learned the new details about what happened in Portapique from Global News.

“This is news, I think, to all of us,” said Jon Farrington, whose parents Dawn and Frank Gulenchyn were killed in Portapique.

“It makes no (sense) how something like this could happen with police presence right around him.”

Farrington’s parents were among the 13 people killed in Portapique, where the gunman, Gabriel Wortman, owned a cottage and had spent most of his time during the early weeks of the novel coronavirus pandemic.

The gunman would go on to kill nine other people after he escaped Portapique in a 13-hour-long spree, burning multiple homes and vehicles to the ground.

Meanwhile, court documents reveal that a man told the first officers who arrived at the scene in Portapique at 10:26 p.m. on April 18 that a neighbour named “Gabe” had shot him.

The witness also told police that the gunman was driving what looked like a real police vehicle and that he’d just lit the Gulenchyns’ house on fire.

Another eyewitness who lives near Portapique the night of the shootings told Global News that police did not block off the highway the gunman used to escape the area until after 10:45 that night. 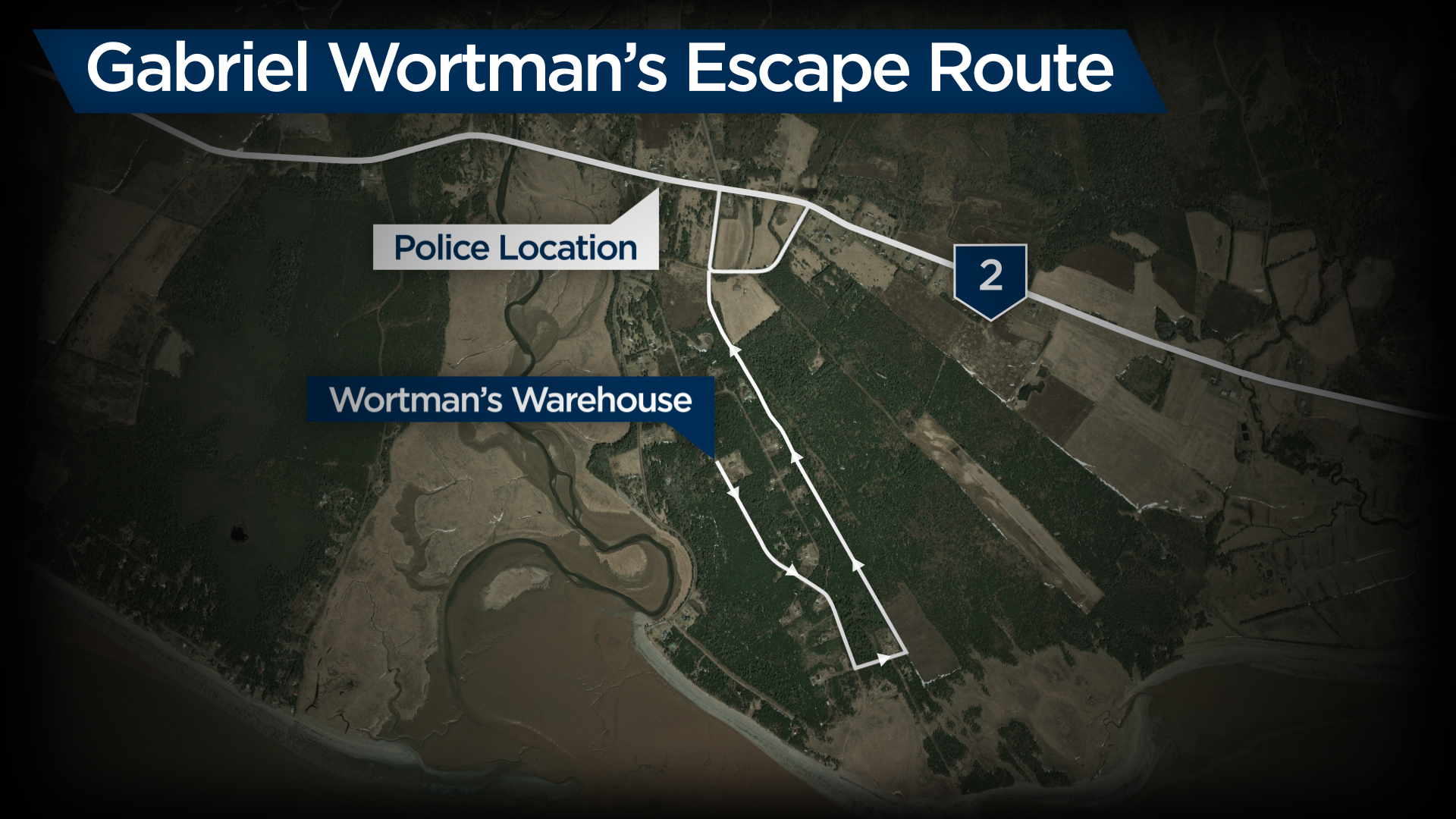 Laurie George said he saw the fires burning from his backyard and went to investigate, driving past the intersection of Highway 2 and Portapique Beach Road. He saw RCMP vehicles, but said he was not stopped by police initially.

George took photos of fire burning at what appears to be the gunman’s cottage based on its location and proximity to the water. The photos are time-stamped at 10:40 p.m.  — roughly 14 minutes after police first arrived on the scene.

George then drove back to his home, about five minutes away, and picked up his wife, he said. They tried to return to the scene of the fires, but this time police turned them away, near the turn-off to Portapique Beach Road. 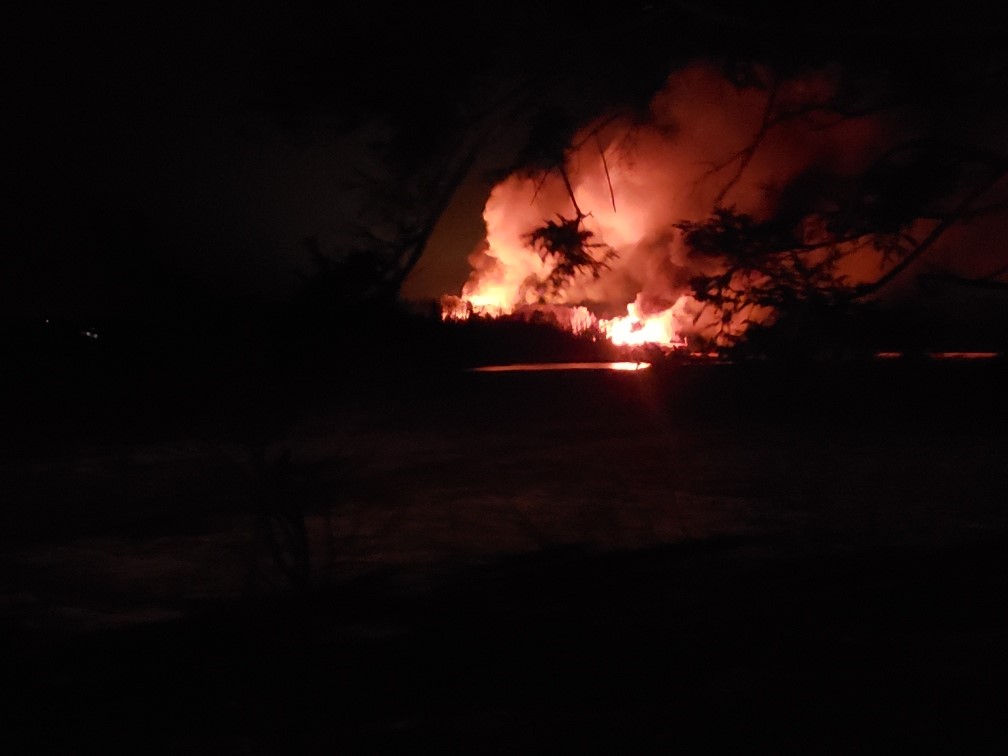 Global News asked the RCMP what time they set up a roadblock on Highway 2. The RCMP did not respond to this question. 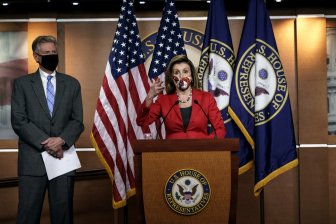 The RCMP has previously said they set up a “four square kilometre” perimeter surrounding the area of Portapique where the killings occurred. Police have not said exactly when and where these perimeters were established.

As Global News previously reported, the RCMP’s only Atlantic-based helicopter was “undergoing routine maintenance” the weekend of the shootings and was therefore unavailable to assist with the manhunt.

Although the RCMP initially told reporters it requested air support as part of its response to the incident, it didn’t call on two nearby Air Force bases, which have helicopters capable of nighttime search and rescue missions.

The RCMP have told Global News they were eventually able to secure a helicopter owned by the Nova Scotia Department of Lands and Forestry to assist with the search.

Victims’ family members have identified this as a key failing of the RCMP’s response to the shootings in a proposed class-action lawsuit filed against the force and the province.

The families’ lawyers have also criticized the RCMP for not providing timely and meaningful updates.

“I think it has to raise some red flags about the response,” said the families’ lawyer Sandra McCulloch.

“Obviously, having twice as much time to assess the situation and make a response to the situation, it can’t but give rise to concerns about what was done or not done that night.”

Global News asked the RCMP when and why their description of how Wortman escaped Portapique had changed. The RCMP did not answer these questions.

The RCMP also declined a request to be interviewed for this story.

It’s not unusual for police or witnesses to provide conflicting descriptions of events during an ongoing criminal investigation. In this case, it isn’t clear whether police spoke to any witnesses who changed their description of events.

Farrington said what’s most upsetting about the new information about when the gunman might have escaped Portapique is that he learned it from the media.

This echoes comments made by other victims’ family members who’ve said they feel like they’re being kept in the dark and that the RCMP isn’t doing enough to keep them informed of the ongoing investigation.

“If you guys already know and the public already know, why not the families?” Farrington said.

Farrington said he knows the job police are tasked with is a difficult one, but he expected police would have done more to communicate with families about important developments in the investigation.

“A simple phone call, like, ‘Guys, how’s it going? No news.’ It’s better than being silent,” he said. “It makes us feel like, you know, you’re not working on the case at all.”

Darryl Davies, a criminology instructor at Carleton University, said it’s unlikely there’s anything the RCMP could have done to save the 13 people who were murdered in Portapique the night the shooting spree began.

“Because of the few officers there (in Portapique), I don’t think they had a snowball’s chance in hell of doing anything to save lives,” Davies said. “I think they were lucky they saved their own given the way this played out.”

Still, he said, he is concerned about other aspects of the police response, including the RCMP’s decision not to use the province’s emergency alert system to warn the public about the danger.

“The RCMP have failed in the last decade to bring about the kinds of changes that we need in Canada for this national police service to respond to these kinds of crises,” Davies said.

That was the last press conference the RCMP held to discuss the Nova Scotia shooting and the last time investigators faced questions from the media in a public setting.

In July, the federal government and Nova Scotia announced a public inquiry into the shootings and the RCMP’s response to the tragedy, reversing an earlier decision.

The inquiry will look into a wide range of issues related to the killing spree, including the RCMP’s immediate response, the force’s decision not to use the emergency alert system to warn the public, and the way officers have communicated with victims’ families.

The inquiry must deliver an interim report by May 1, 2022, followed by a final report that is due six months later. The reports will first be delivered to the federal and Nova Scotia governments, which will then decide when to release them.

The RCMP have also said they assigned a family liaison officer to work with the victims’ families and to keep them updated with developments of the ongoing investigation.

This officer was assigned as part of the RCMP’s critical incident response immediately after the shooting spree. The RCMP said the family liaison provides information to victims’ families before giving it to the media.