Tripadvisor troll bit off more than he could chew when he posted fake negative reviews of restaurant run by Cambridge graduate with first-class law degree who successfully sued him for £7,455

An online troll who posted a series of fake negative reviews about a restaurant on Tripadvisor bit off more than he could chew when the Cambridge law graduate owner successfully sued him for £7,455.

During his campaign, Martin Stewart Potts wrote ten false reviews about eatery Bispham Kitchen, with one claiming the food made him, his wife and his children sick.

He made fake accusations about the family restaurant in Blackpool, Lancashire, between October 23 and November 16, 2018, claiming that the restaurant’s haddock was in fact ‘catfish’ and that their chips were ‘fried in burnt oil’.

But restaurant owner Steve Hoddy, a trained lawyer with a first-class degree from Cambridge, took him to court, and during a hearing in July, Judge Sephton ruled that Potts was guilty of malicious falsehood.

He was ordered to pay thousands in compensation to Mr Hoddy.

Speaking after the verdict, Mr Hoddy said that trolling had become ‘rife’ and called fake reviewers a ‘scourge of modern society’.

He said: ‘Online trolling is rife and one of the big problems nowadays. It’s becoming a pandemic of its own. It wrecks businesses. 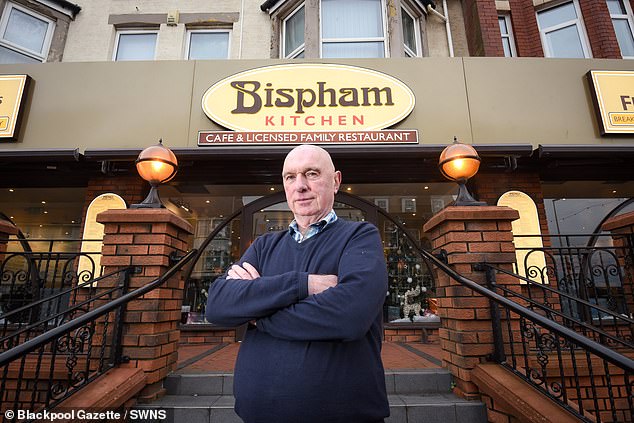 ‘I have owned Bispham Kitchen for 44 years now and my business is robust enough to withstand this sort of nonsense.

‘But particularly for hotels it is a real problem, because people really do take note of hotel reviews because they are spending larger sums of money.

Malicious falsehood is a lie that was uttered with malice, meaning the person who spoke or wrote it knew it was false or would cause damage or harm.

The law of malicious falsehood is often used to protect economic interests.

Claims are sometimes made alongside  or as an alternative to defamation claims.

A statement is malicious if the person who uttered it either knew it was not true or did not take the proper care to check.

Section 3(1) of the Defamation Act 1952 says that for a slander of title or slander of goods it is not necessary to allege or prove special damage if the words were ‘calculated to cause pecuniary damage’.

This also applies if the words are calculated to cause pecuniary damage ‘in respect of any office, profession, calling, trade or business’.

‘It is the scourge of modern society.’

Mr Hoddy said that he received the ten malicious reviews about Bispham Kitchen, a family restaurant in Blackpool, Lancs, between October 23 and November 16, 2018.

He said: ‘About three years ago, this man decided he was going to troll Bispham Kitchen.

‘He used eight different usernames and was saying things like ‘the fish wasn’t haddock it was catfish’, and that it made himself, his wife and children ill and ‘the chips were fried in burnt oil.’

‘He put the first review on, and it said, ‘owner glares at you weirdly when you are trying to eat your fish and chips, not a nice experience.’

‘I don’t normally reply to reviews, but I did to this one and the reply was partially humorous.

‘I said ”I can assure you the owner of Bispham Kitchen is the most charming delightful person you could possibly hope to meet and he would not dream of glaring weirdly at his customers”.

‘But that seemed to provoke him into the spate of reviews over the next couple of weeks.

He added: ‘The problem was it was in the October half term week, 2018, which is our busiest time, serving probably a thousand customers a day.

Mr Hoddy, who is the managing director of six restaurants and a takeaway, then managed to identify more bad reviews that Potts had left under different names about his other venues.

He said: ‘It was a whole catalogue of bogus reviews. He later put up reviews of some of my other businesses too.

‘But he’d made the same spelling mistakes throughout the different reviews, so it was obvious it was the same person.

‘With four of the usernames, he had done about a hundred reviews of other places, so I was able to piece together a picture of who he was.

‘He knew exactly what he was doing. I traced him and I went and confronted him. 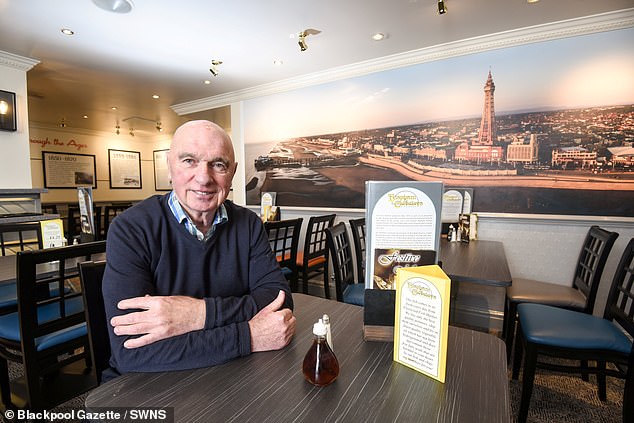 Martin Potts bit off more than he could chew when restaurant owner Steve Hoddy (pictured), a trained lawyer with a first-class degree from Cambridge, took him to court

Mr Hoddy, who also is a trained lawyer, said he began by sending Potts letters, asking him to apologise for his false remarks.

He said: ‘I gave him a letter warning him that unless he apologised for the reviews, I would sue him for malicious falsehood.

‘Unbeknown to him, I did law at university and have two law degrees, although I don’t practice as a barrister.

‘I issued proceedings against him in Manchester County Court for malicious falsehood.

He added: ‘These are difficult actions to take, they are complicated and expensive.

‘Most people could not bring this kind of case as they are complicated, and a law firm would charge a high fee for this sort of action.

‘He at first denied he had done the reviews. But when I presented him with incontrovertible evidence, he drip-fed admissions, but still resisted the case.

‘The case came up in Manchester Country Court on July 19. I won and was awarded £7,455 in damages and costs.

Even during the court hearing, Mr Hoddy said that Potts seemed to drag his feet.

‘He did not turn up for the hearing and came up with an excuse that he had failed a lateral flow test.

‘As a result, he then applied to have the judgment set aside and that hearing took place a couple of weeks ago. That was a telephone hearing and the application to set aside was rejected.’

‘He said Mr Potts could not prove he had taken a lateral flow test and the judge kicked out his appeal.’

Mr Hoddy said the case highlighted how easy it was for malicious trolls to hide their identities on websites like Tripadvisor.

He said: ‘You can’t get anywhere with Tripadvisor to get them to reveal the identity of the reviewers.

‘One of their terms and conditions is that any dispute with Tripadvisor must be decided in the court of Massachusetts, where they are based, so you would have to go to the US.’

At the time, Mr Hoddy contacted Tripadvisor to point out the reviews could not be correct and the website later took down the comments.

Mr Hoddy had qualified in law with a first-class degree from Cambridge and was offered a place at the Inns of Court to do the bar finals, but he chose to go into business in Blackpool.

He said most businesses would not be able to put together a successful malicious falsehood case.

But he added that he enjoyed using the knowledge and skills he had learned at university and treated the complex procedure as a challenge.

Mr Hoddy explained: ‘I specialised in defamation law but knew nothing about county court procedure, so I did some research.

‘I enjoyed doing it, it was what I had been trained for.

‘But I did not do it for the money, it was for the principle – to send a message to those who think they can damage a business or a personal reputation at will.

‘Although I could prove my case, I still had to give the court guidance as to how much damages I expect.

‘At the hearing, the judge made me stand up and justify how much money he was expecting to give.

‘Tripadvisor produce bar graphs to show how many search hits a particular business has had in a month.

‘I used those to show that in that month there were 2,500 search hits and extrapolating from that that 50 per cent would have read the reviews because they were all lined up there at the top of the listing.

‘I had to estimate how many people they would have put off or brought in. In the end the judge gave me pretty much what I asked for.

‘I had to prove that the reviews complained of were both false and malicious. I did this relatively easily.

‘On the review which said he made him, his wife and his children ill, I found out he did not have a wife or children.

‘With the catfish claim, I was able to produce all my fish bills to show the fish we serve was haddock.

‘I also did a credit search on his address and name.

‘It came up with five different aliases, all with the same date of birth and one of which was one of the user names which he denied using. So I could prove my case.

A UK spokesman for Tripadvisor, which is based in Needham, Massachusetts, said:

‘Tripadvisor takes the issue of fraud extremely seriously and we use the best in technology and human moderation practices to fight it.

‘Our advice to business owners and consumers alike is simple: if you see a review that arouses suspicion or breaches any of our guidelines, please report it to us. Our team will then investigate, and act accordingly.’