Any victory by Chinese-Australian businessman Chau Chak Wing in his defamation case against the ABC and Nine would be reported enthusiastically by the media outlets' rivals, the Federal Court was told.

On the second day of Mr Chau's defamation case against the outlets, barrister Matthew Collins, QC, for the ABC and Nine, said the likely publicity surrounding any victory by the businessman should be taken into account in assessing the size of any damages payout. 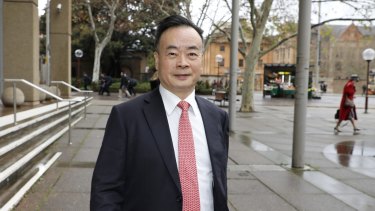 Chau Chak Wing outside the Federal Court in 2018.Credit:Chris Pavlich

A win for Mr Chau would be "gleefully reported by rival media organisations" as well as being reported by Nine, publisher of The Sydney Morning Herald and The Age, and the ABC, Dr Collins said.

This would, in Dr Collins' submission, mitigate any damage suffered by Mr Chau by vindicating his reputation and support a lower award of damages than might otherwise be the case.

But Mr Chau's barrister, Bruce McClintock, SC, objected to Dr Collins tendering media reports about Mr Chau in support of this argument and said "these articles are just pieces of paper".

Justice Steven Rares, who is presiding over the trial, said: "I don't see how other newspaper articles … [are] relevant."

Mr Chau is suing the ABC, Nine and journalist Nick McKenzie, an investigative reporter at The Age and the Herald, over a Four Corners broadcast on June 5, 2017.

McKenzie presented the program and the investigation included an accompanying article on the ABC website.

In a statement of claim, Mr Chau's lawyers say the broadcast and article defamed their client in six ways, including by suggesting he is a spy who "betrayed his country, Australia" in order to serve China's interests, and paid large sums to Australian political parties that were intended as bribes. The ABC and Nine deny the publications convey those meanings.

Speaking via an interpreter from China, Mr Chau told the court on Tuesday he was a "legitimate businessman" and would "never do anything wrong to Australia". 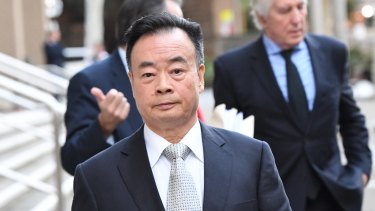 Under cross-examination by Dr Collins, Mr Chau admitted he had not watched the Four Corners broadcast before the trial and only received a translation two or three weeks ago. It was "translated to help me understand … mainly the contents related to the defamation to me", he said.

His daughter, Winky Chow, gave evidence on Wednesday her father was "really hurt" by the broadcast and she was "shocked and surprised".

Ross Milbourne, former vice-chancellor of the University of Technology, Sydney, headed the university when Mr Chau offered $20 million to support the construction of its Frank-Gehry designed Faculty of Business Building, plus $5 million for scholarships. He gave evidence Mr Chau had "a high reputation for integrity".

David Ellis, director of museums and cultural engagement at the University of Sydney, told the court Mr Chau appeared to be a "quiet giver" after he donated $15 million towards a new university museum in 2015.

The most important news, analysis and insights delivered to your inbox at the start and end of each day. Sign up to The Sydney Morning Herald’s newsletter here, to The Age’s newsletter here and Brisbane Times‘ here.