Moscow: Russian Foreign Minister Sergei Lavrov says that Kremlin critic Alexei Navalny, who fell ill on a flight in Siberia on August 20 and was airlifted to Berlin for treatment, could have been poisoned in Germany or on the plane to Berlin.

Blood samples taken from Navalny, 44, confirmed the presence of a Novichok nerve agent, the global Organisation for the Prohibition of Chemical Weapons has said. 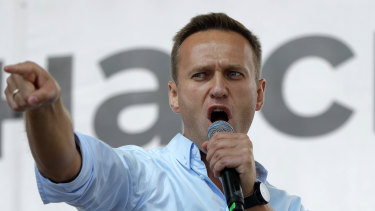 Alexei Navalny, pictured last year, has been a strident critic of Putin’s Kremlin.Credit:AP

The poisoning has worsened relations between Russia and the West, which had introduced sanctions on top Russian officials close to President Vladimir Putin.

"We have all grounds to believe that everything which had happened to him (Navalny) from the point of view of warfare agents entering into his body could have happened in Germany or on the plane where he was loaded and sent to the Charite clinic," Lavrov told an online new conference.

He did not specify the evidence.

Navalny received treatment in the Charite hospital in Berlin for 32 days before being discharged in September.

Last month, the European Union and Britain imposed sanctions on top Russian officials close to Putin in response to the poisoning of Navalny.

Lavrov said on Thursday, local time, that Russia would soon announce the retaliatory measures it has taken against senior French and German officials in tit-for-tat sanctions related to the poisoning.

Russia has denied any involvement in the poisoning of Navalny who is recovering in Germany.

Traces of Novichok were also found in the 2018 British case of the poisoning of Russian double agent Sergei Skripal and his daughter.