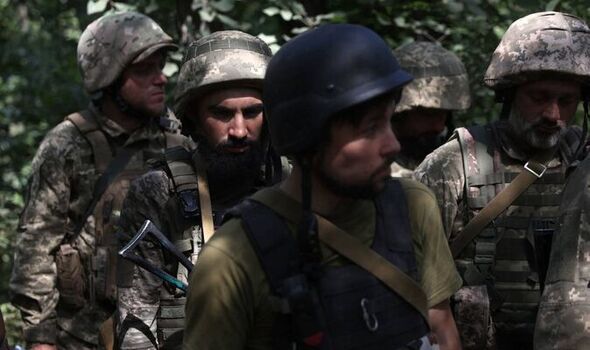 Ukrainian troops may have even secured key bridges to allow them to reinforce the city, a Russian war blog said. It comes after President Volodymyr Zelensky said the Ukrainians had successfully used Western-supplied artillery to destroy a Russian ammunition warehouse storing missiles used to target Kharkiv.

S-300 missiles were destroyed in the strike.

Another pro-Russian Telegram channel claimed there was “no panic” amid increasing rumours of a major offensive near Kharviv, adding that reserves were being sent to the town. It said there was no “deep breakthrough.”

It comes as a close aide to President Volodymyr Zelensky said his country’s attempts to regain territory had spread beyond Kherson in the south and military chiefs were now engaging in counter-attacks across the country.

The Institute for War said Ukraine’s counteroffensive is ‘tangibly degrading’ Russian capabilities in the south.

The US think-tank added: “Ukrainian forces intend to slowly chip away at both Russian tactical and operational level capabilities in Kherson Oblast, and in doing so will likely have significant impacts on the administrative and bureaucratic capabilities of occupation officials,”

And Oleksiy Arestovych, an aide to Mr Zelensky revealed: “Counteroffensive actions by the Armed Forces of Ukraine are taking place not only in the south of Ukraine, but also in the east and southeast,” he said.

Mr Arestovych added that “the beginning of counteroffensive actions on different sectors of the front on our part speaks of a change in the situation as a whole”.

Russia has been forced to buy military hardware from North Korea as sanctions squeeze Moscow’s ability to supply its military.

A US official said Russia would be forced to buy additional North Korean weaponry as the war dragged on.

Iran and North Korea, both the targets of significant Western sanctions, have sought to deepen ties with Russia since President Vladimir Putin launched his invasion of Ukraine in February.

On Tuesday, UK defence officials said in a daily update that Russia was struggling to maintain its supply of battlefield drones in the face of significant “combat losses”.

“It is likely that Russia is struggling to maintain stocks of UAVs [unmanned aerial vehicles], exacerbated by component shortages resulting from international sanctions,” the update said.