Putin’s bridge too far: Russians mount a SECOND doomed attempt to cross river where Ukraine destroyed a whole battalion – forcing the survivors to swim for their lives following disaster

Russia has made another failed attempt to cross a Donbas river where an entire battalion was wiped out by Ukrainian artillery – losing more men in the process with survivors forced to swim to safety.

Putin’s troops were trying to rescue men and vehicles that had got stranded on the wrong side of the Donets River, near Biolhorivka, after the first attempt on May 8 ended with their pontoon bridges being sunk by an artillery barrage that destroyed dozens of armoured vehicles and may have killed more than 1,000 troops.

But their rescue mission was found out and subjected to the same fate. Fresh satellite images taken near Biolhorivka show yet another sunken pontoon bridge along with half a dozen destroyed or abandoned vehicles.

Russia has lost more than 70 vehicles and seen two infantry battalions mangled in four days of attempts to bridge the river, according to Ukrainian investigative site InformNapalm.

It is just the latest humiliation for Putin’s army – once ranked second in the world – after commanders failed to capture the capital Kyiv, were beaten back from Mykolaiv by a rag-tag band of territorial defence troops and civilians, and got their Black Sea flagship Moskva sunk by Ukrainian missiles.

Commanders are now trying to seize control of the Donbas region – cynically claiming that was their true objective all along – but have so-far failed to make any significant breakthrough in almost a month of fighting, with Kyiv claiming Russia has suffered ‘colossal’ losses. 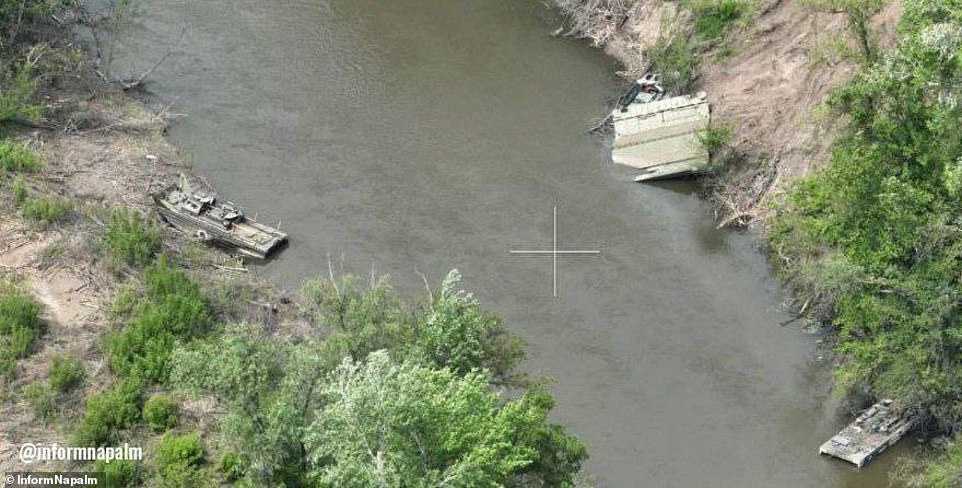 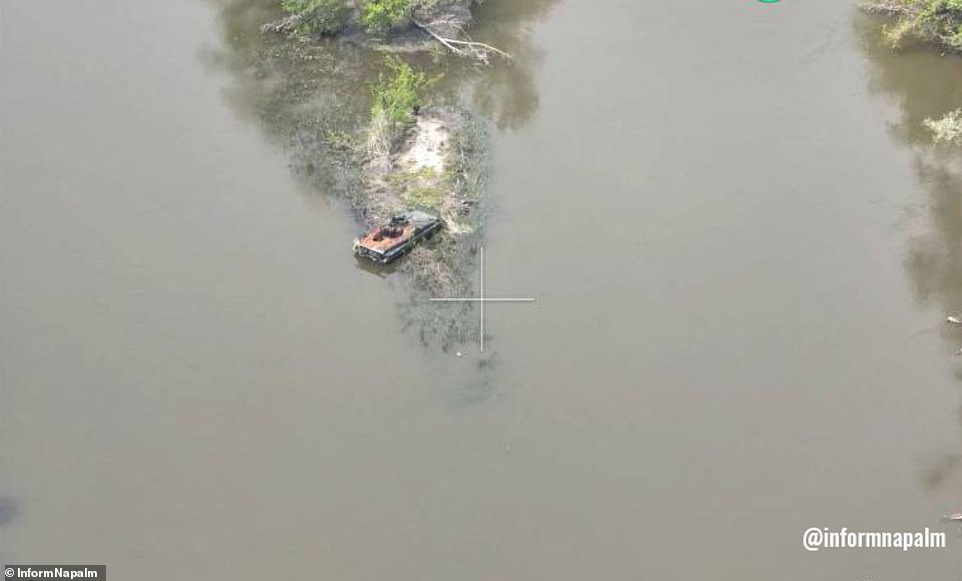 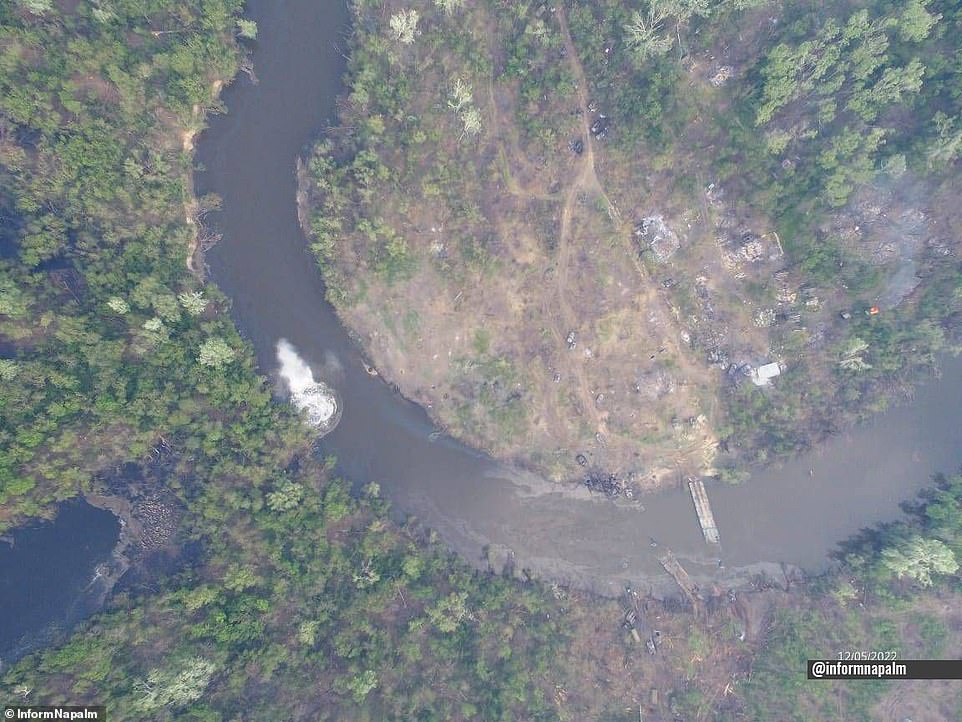 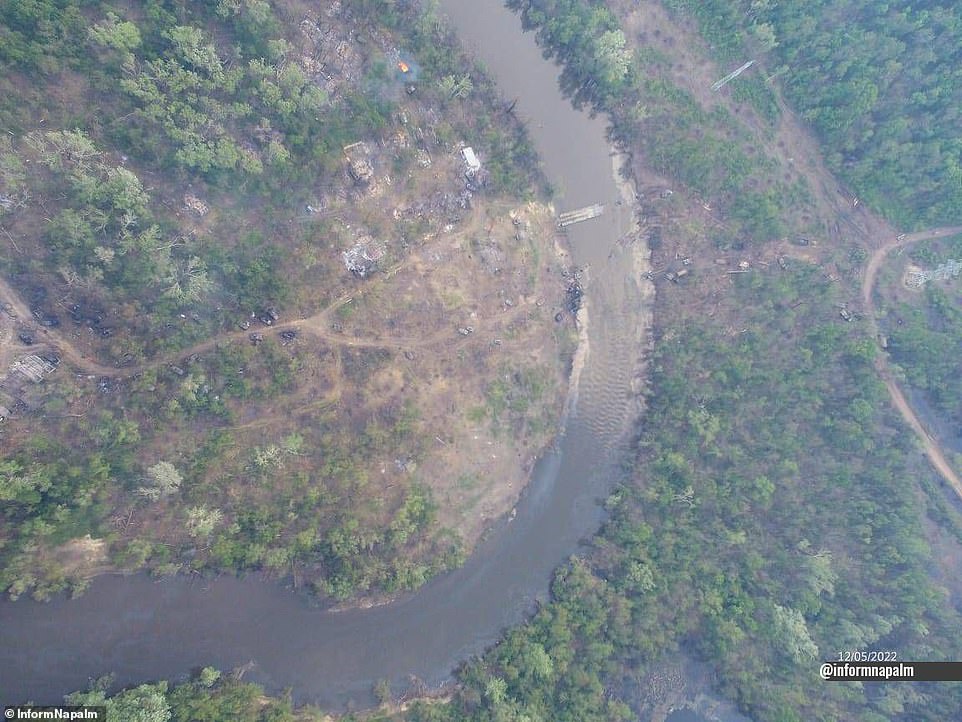 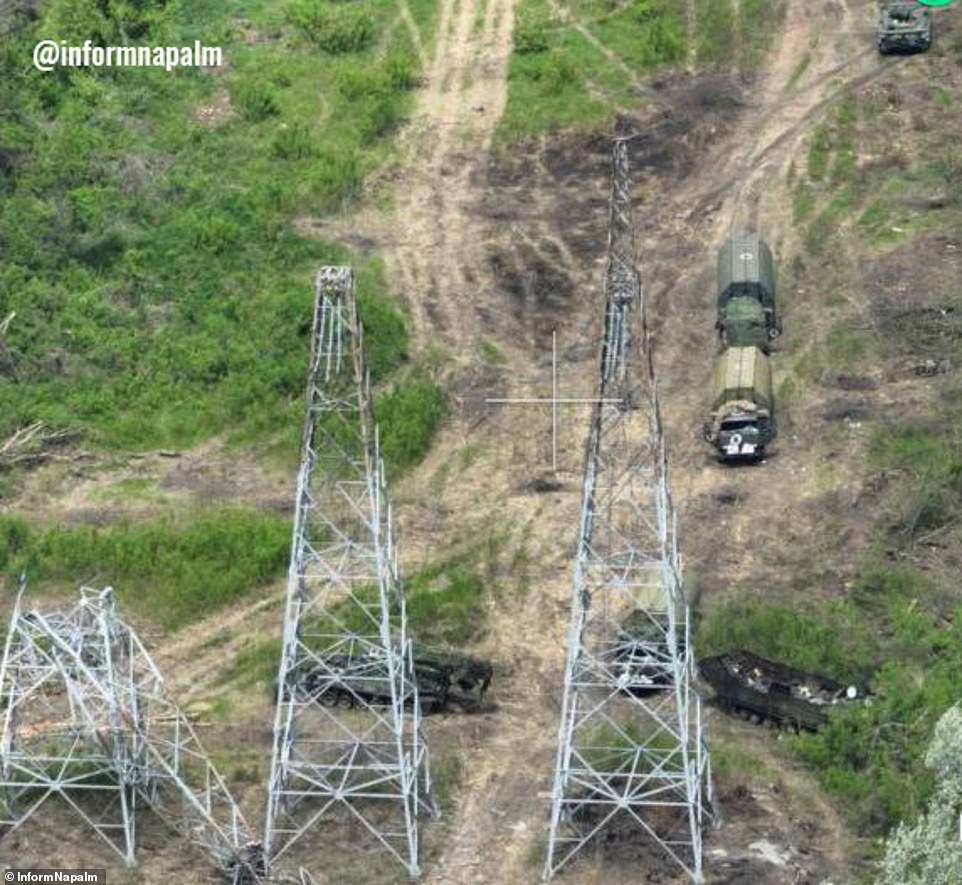 The attack on Bilohorivka was almost certainly designed to surround the cities of Severodonetsk and Lysychansk – which straddle the Donets River – in a pincer movement from west and east. Had it succeeded, Ukrainian defenders would have been cut off from reinforcement and re-supply, facing a similar fate to those in Mariupol.

Having failed to take Bilohorivka, Russian forces now pushing into the outskirts of Severodonetsk face street-to-street fighting in order to take it. Seizing Lysychansk will require them to make a river crossing somewhere, after Ukrainian defenders destroyed permanent bridges. It remains to be seen whether they are capable of doing so.

If Russia can seize the two cities, it would allow them to claim the Luhansk region has been ‘liberated’ from Ukrainian control – providing a propaganda boost to the Kremlin months after Putin declared it to be independent and vowed to ‘defend’ it against what he claimed was Ukrainian aggression.

His commanders would then face a bitter fight to take Sloyansk and Kramatorsk – some 40 miles to the west – using the same surround-and-capture tactics. Coupled with the fall of Mariupol, where hundreds of Ukrainian troops are staging a last stand inside a steel works, it would allow Putin to claim victory in Donbas.

Provided he has enough men left to defend against Ukrainian counter-attacks, that could prompt a declaration of overall victory for his ‘special military operation’ and may see a halt in the fighting while some kind of peace deal is hashed out between the two sides.

Alternatively, the ‘victory’ could prompt Putin to push further – perhaps renewing attacks along the Black Sea coast towards Mykolaiv and Odesa, leaving what remains of the country landlocked and deprived of lucrative oceangoing trading routes.

But such an outcome is far from certain, and Kyiv is likely to be extremely mistrustful of any ceasefire agreement – fearing it will only give Russia time to rearm and renew its attack, as happened between the last invasion in 2014 and the current war which began on February 24.

At the very least, the country is sure to demand security guarantees from the West to protect it from being victimised a third time – or will simply refuse to sign and keep trying to break Russian lines using weapons supplied by the West.

In the event that Russia cannot take the Donbas, Ukraine’s foreign minister Dmytro Kuleba said this week that Ukraine’s ‘victory’ aim would be to reverse the tide of the war and push Russia back – not just to the areas it held before the invasion but entirely out of Ukrainian territory.

That would mean re-taking areas of Donetsk and Luhansk held before the current invasion, and an assault on Russian naval bases in Crimea. It remains to be seen whether Ukraine has the manpower for such attacks.

Russia faced mounting accusations of war crimes in Ukraine Friday including forcing thousands of people into interrogation camps, as the number of refugees reported to have fled the conflict surpassed six million.

The Russian invasion has also led to a seismic policy change by Finland, whose leaders said Thursday the previously neutral nation must apply to join NATO ‘without delay’ – triggering a blunt warning of retaliation from the Kremlin.

Throughout the 11-week conflict, Russian forces have been accused of committing atrocities – including the killing of unarmed civilians, torture and rape.

CNN and the BBC on Thursday released what they said was security camera footage showing Russian soldiers with assault rifles shooting two Ukrainian civilians in the back.

The two men appeared unarmed – the footage showed the soldiers frisking them before allowing them to walk away at a business premises on the outskirts of the capital Kyiv. One man died on the spot, the other shortly after, according to the outlets. The killings took place on March 16 and are being investigated as a war crime, CNN said.

The incident took place on March 27 in the village of Stepanki outside Kharkiv, the Ukrainian prosecutor general’s office said on Telegram. Local resident Denys, 40, said he saw the barrel of the tank turn towards him.

‘Someone said: let’s go hide inside the house,’ Denys said. ‘I entered last and as soon as I entered, the tank fired. Everything collapsed, I couldn’t see anything.’

The UN Human Rights Council voted 33-2 on Thursday to investigate alleged atrocities by Russian troops in Ukraine. Ukrainian prosecutors say they have received reports of more than 10,000 alleged crimes.

The UN refugee agency said Thursday more than six million people had fled Ukraine, more than half of them going to neighbouring Poland. Women and children make up 90 per cent of the refugees, UNHCR said.

The United States on Thursday accused Russia of forcibly taking tens of thousands of Ukrainians to ‘filtration camps’ in Russia or Russian-controlled territory where they are subjected to ‘brutal interrogations’.

‘These actions amount to war crimes,’ said Michael Carpenter, the US ambassador to the Organization for Security and Cooperation in Europe (OSCE). ‘We must not allow this evil to stand.’

The remarks backed Kyiv’s allegation that 1.2 million people have been taken to Russia or Russian-controlled areas. 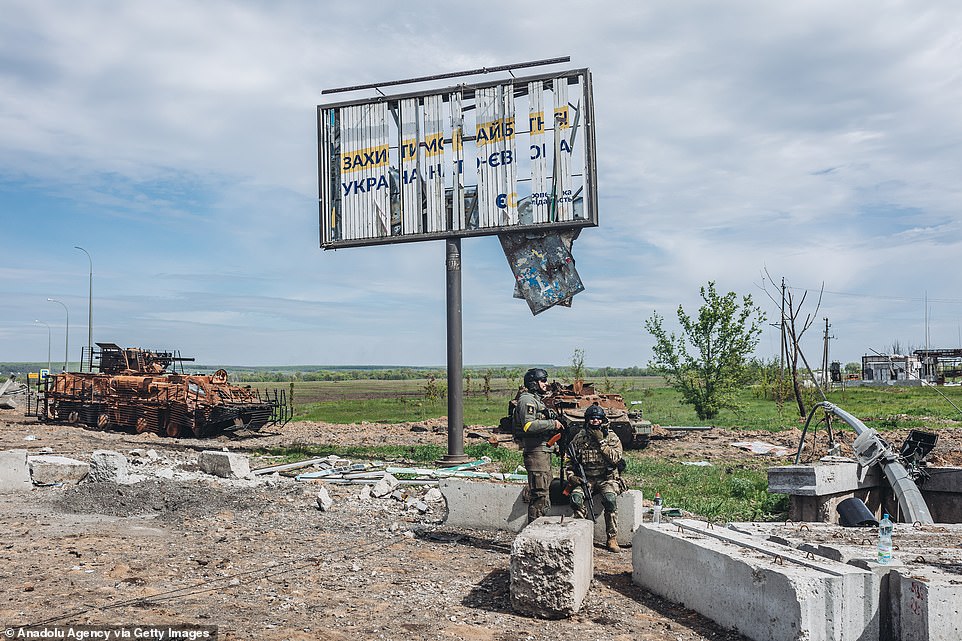 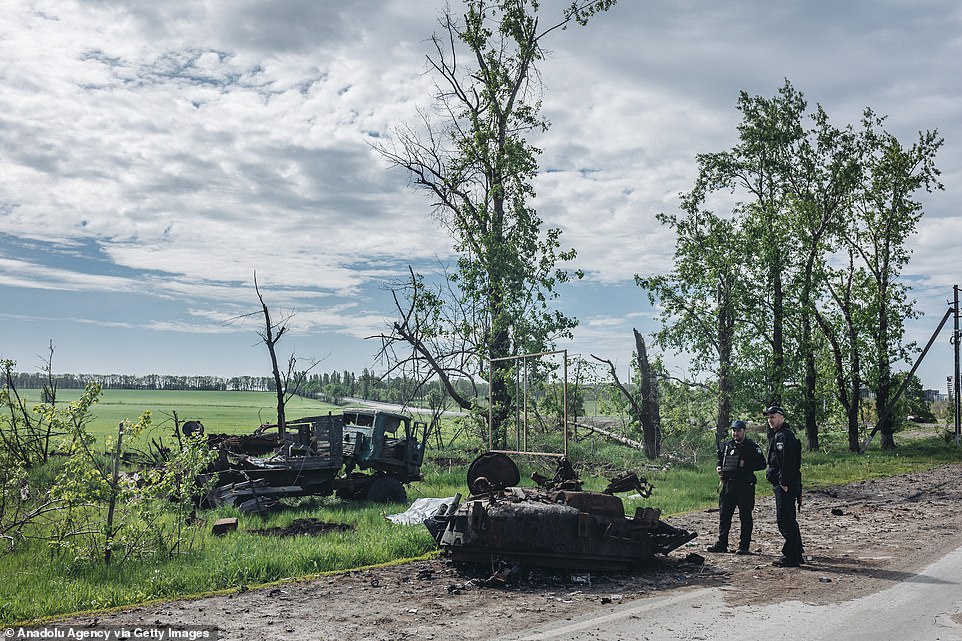 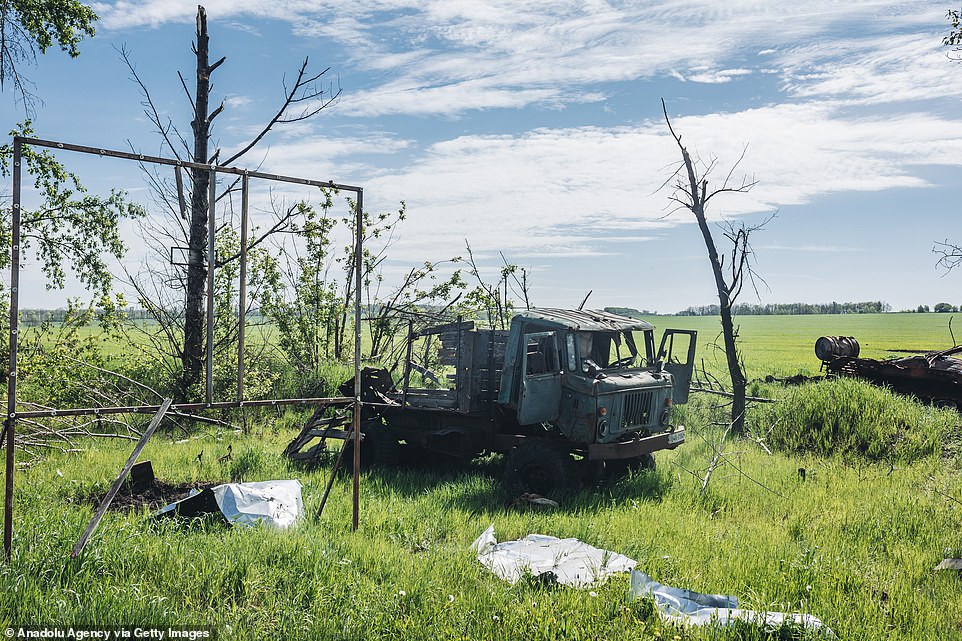 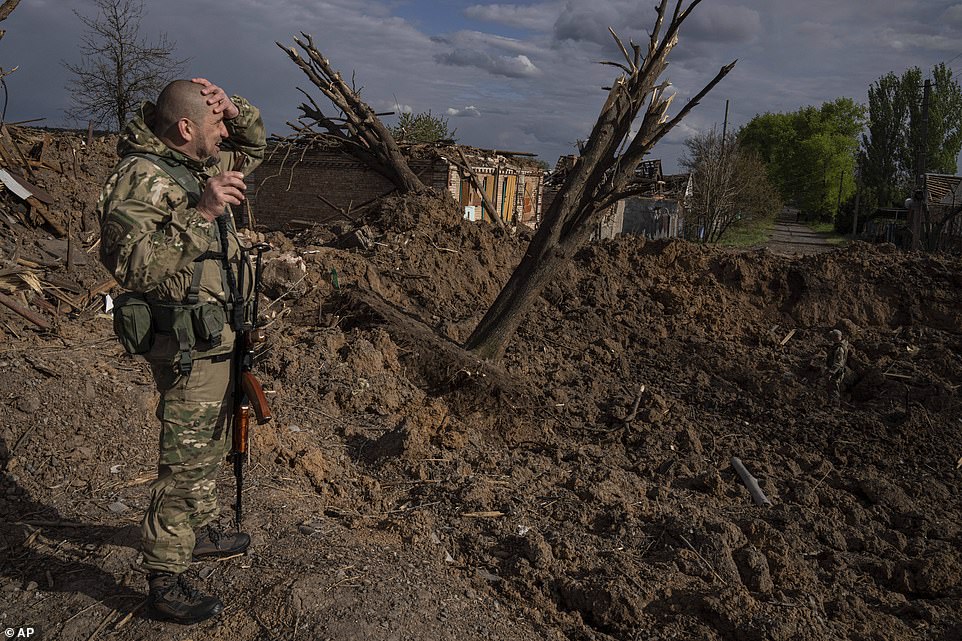 In the northeastern region of Chernihiv, three people were killed and 12 others wounded early Thursday in a strike on a school in Novgorod-Siversky, the emergency services said.

In the southern port city of Mariupol, troops at the Azovstal steelworks have been holding out against Russian bombardment for weeks, refusing demands to surrender.

Russia’s army said it struck Donetsk and Kharkiv on Thursday, killing more than 170 people and destroying Ukrainian drones and rockets.

When launching the invasion of Ukraine, Russian President Vladimir Putin had cited in part what he called the threat from NATO, which has expanded eastwards since the end of the Cold War.

Rather than containing the bloc, however, the war appears to have had the opposite effect.

The leaders of Finland, a declared neutral state in East-West crises for decades, said Thursday their country should join the bloc.

‘As a member of NATO, Finland would strengthen the entire defence alliance,’ President Sauli Niinisto and Prime Minister Sanna Marin said in a joint statement.

The Russian foreign ministry warned Moscow would be ‘forced to take reciprocal steps, military-technical and other, to address the resulting threats’.

Finland shares a 1,300-kilometre (800-mile) border with Russia and its past is studded with conflict with its giant neighbour.

NATO has already declared it will warmly embrace Finland and Sweden, two countries with deep pockets and well-equipped militaries.

A special committee will announce Finland’s formal decision on Sunday. Sweden, another neutral state, is widely expected to follow.

The flow of gas from Russia to Europe meanwhile fell, spurring fears for Germany and other economies heavily dependent on that source of energy.

Gazprom also said gas transiting to Europe via Ukraine had dropped by a third.

Ukraine and Poland are major supply routes for Russian gas to Europe and the two sides have kept flows going despite the conflict.

Kuleba has been invited to the meeting of G7 foreign ministers in Germany, which started Thursday with the Ukraine war set to be the main topic on the agenda.

Emma Raducanu models for Dior skincare We use your sign-up to provide content in ways you’ve consented to and to improve our understanding of you. This may include adverts from us and 3rd parties based on our understanding. You can unsubscribe at…