Russia waded into the coronavirus vaccine safety debate today with a PR blitz to claim its Sputnik jab does not cause the rare blood clots that have blighted others.

The country’s controversial vaccine triggers an immune response in a similar way to rival jabs made by AstraZeneca and Johnson & Johnson.

But its manufacturer, the Gamaleya Research Institute in Moscow, today claimed its jab does not cause the same clot problems seen with those vaccines because of its ‘purification technology’.

Critics accused Russian scientists of trying to undermine Britain’s vaccine drive and to profit from AstraZeneca and Johnson & Johnson’s bad press by advertising its own jab as an alternative.

James Lawson, a fellow at The Adam Smith Institute think-tank, told MailOnline: ‘With Russia’s languishing vaccine campaign, it’s clear they are in no position to lecture others.

‘Their propaganda is designed to undermine other nations and should not be given any credit.

‘Evaluation must avoid degenerating into petty international politics and be led by science — the priority is maximising supplies of all effective vaccines, without giving credence to any fear-mongering directed against our existing safe vaccines.’ 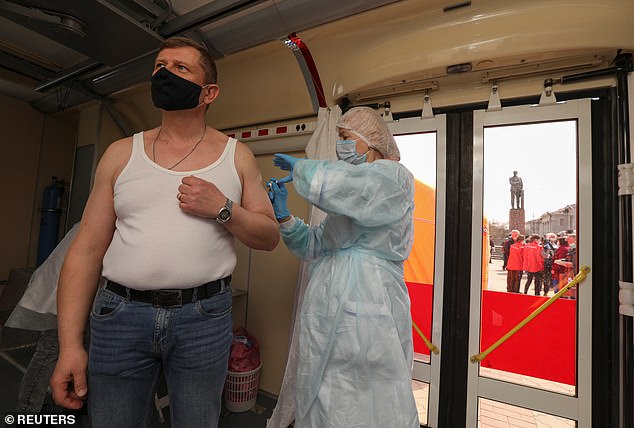 A man is pictured receiving a dose of the Sputnik V vaccine at a mobile jab site in in Simferopol, Crimea

The Gamaleya Institute said that there were ‘significant differences’ in the way it had used cold viruses to develop its vaccine compared to AstraZeneca and Johnson & Johnson.

It says a ‘four-stage purification technology’ used to develop Sputnik V improves the safety of the jab, citing a study that suggests ‘insufficient purification’ of DNA could trigger blood clots.

The latest developments come amid a string of reports suggesting that both those vaccines might raise the risk of a condition called cerebral sinous venous thrombosis (CSVT) for young adults.

The Food & Drug Administration in the US this week dragged Johnson & Johnson’s vaccine into the furore, asking medics to stop using it while it investigates one-in-a-million cases of brain blood clots in young women.

WHAT DID THE RUSSIAN SCIENTISTS SAY? TECHNICAL STATEMENT IN FULL

A comprehensive analysis of adverse events during clinical trials and over the course of mass vaccinations with the Sputnik V vaccine showed that there were no cases of cerebral venous sinus thrombosis (CVST).

All vaccines based on adenoviral vector platform are different and not directly comparable. In particular, AstraZeneca’s ChAdOx1-S vaccine uses chimpanzee adenovirus to deliver the antigen, consisting of S-protein combined with leader sequence of tissue-type plasminogen activator.

The vaccine from Johnson & Johnson uses human adenovirus serotype Ad26 and full-length S-protein stabilized by mutations. In addition, it is produced using the PER.C6 cell line (embryonic retinal cells), which is not widely represented among other registered products.

Sputnik V is a two-component vaccine in which adenovirus serotypes 5 and 26 are used. A fragment of tissue-type plasminogen activator is not used, and the antigen insert is an unmodified full-length S-protein.

Sputnik V vaccine is produced with the HEK293 cell line, which has long been safely used for the production of biotechnological products.

Thus, all of the above vaccines based on adenoviral vectors have significant differences in their structure and production technology.

The quality and safety of Sputnik V are, among other things, assured by the fact that, unlike other vaccines, it uses a 4-stage purification technology that includes two stages of chromatography and two stages of tangential flow filtration.

This purification technology helps to obtain a highly purified product that goes through mandatory control including analysis of free DNA presence.

In addition, the volume of nucleic acid is several dozen times lower in adenoviral vectors compared to Pfizer and Moderna vaccines (1 to 2 mcg vs 50 to 100 mcg, correspondingly).

A study published in The New England Journal of Medicine on April 9, 2021, discusses that the cause of the thrombosis in some patients vaccinated with other vaccines could be insufficient purification that leads to the emergence of significant quantities of free DNA.

Insufficient purification or use of very high doses of target DNA/RNA can result in adverse interaction of a patient’s antibodies that activate thrombocytes with elements of the vaccine itself, including free DNA and consisting of PF4 factor and heparin or nucleic acid – PF4/DNA and PF4/RNA.

European regulators are expected to decide what to do about the jab by next week, while Britain’s regulator is set to approve its use and to receive 30m doses in the summer.

Denmark today said it wouldn’t use AstraZeneca’s jab any more because of the clotting scare.

No link has been proven, however, and there is still no evidence the vaccines directly cause the condition.

Dr Joe Grove, an infection and immunity researcher at University College London, told MailOnline: ‘The bottom line is we do not know the cause of this very rare complication so it is difficult to say for sure why a vaccine may or may not cause it.

‘Regarding the statement from Gamaleya it is quite well grounded in science and the citation they provide stacks up  – that paper does discuss the idea that DNA impurities may trigger this type of clotting event.

‘However, this was a just suggestion and is not yet supported by evidence that DNA impurities in the AstraZeneca or J&J vaccines cause clotting events.

‘Ultimately, it is difficult to make rational arguments as to why Sputnik V won’t cause clotting when the precise cause of the clots remains unknown. Gamaleya might be right, they might be wrong, only time will tell.

‘I’m confident that all vaccine manufacturers are doing their utmost to provide safe and effective vaccines. Vaccines remain our best, and possibly only, route out of the pandemic.’

While scientists remain unsure what about the two vaccines – if anything – is causing the blood clots, the common theme is they both use adenoviruses.

Adenoviruses are common cold viruses that AstraZeneca and J&J use to transport genetic material from the coronavirus. Pfizer and Moderna, however, use synthetic bubbles to achieve the same goal, and haven’t seen the same clotting concerns.

Sputnik V also uses adenovirus technology but it’s based on different viruses to the other two, the company said, and exhaustively purified.

In a statement released by a London-based PR agency Gamelaya said: ‘All of the above vaccines based on adenoviral vectors have significant differences in their structure and production technology.

Scientists questioned those claims, warning there was ‘considerable uncertainty’ because of a small number of infections in the trial.

Despite all the uproar about the blood clots the risk of developing one is vanishingly rare and significantly lower than the risk of getting Covid.

Health chiefs imposing bans and restrictions on vaccines say they are acting out of an ‘abundance of caution’.

They say the chances of younger adults dying from Covid was so tiny that the benefits of the British-made vaccine do not clearly outweigh the risks.

But the risk-to-benefit ratio for older adults, who face a much greater risk of becoming seriously ill, was clearly in favour of the vaccine, the panel concluded.

They have emphasised, however, that it is extremely rare to develop the condition after the jab — occurring in around one in 250,000 recipients, overall. The rate for under-30s is thought to be roughly one in 90,000.

WHICH COUNTRIES HAVE SUSPENDED THE ASTRAZENECA VACCINE BECAUSE OF BLOOD CLOTS?

SUSPENDED FOR ALL AGES