Russian forces have ‘undermined the security and safety’ of ‘out-of-control’ nuclear power plant they are occupying in Ukraine: Latest warning as experts fear Chernobyl-like disaster

Russian forces are undermining the security and safety of an ‘out-of-control’ nuclear power plant they are occupying in Ukraine, it has been claimed.

There are concerns that a Chernobyl-like disaster could take place at Zaporizhzhia Nuclear Power Plant, which is the largest of its type in Europe, after the Russians took control of the site in March.

While it remains operational, experts have said they are worried about the condition of its 15 nuclear reactors, especially after shots were fired in its direction during the Russian advance.

The Ministry of Defence (MoD) has now said occupying forces have ‘undermined the security and safety’ of the power plant, and has claimed Putin’s army is using the power plant as a shield.

It said the area surrounding the power plant is being used as a base for artillery units to target Ukrainian forces on the banks of the Dnipro river, which runs alongside the site.

The United Nation’s nuclear chief has warned the site is ‘completely out of control’, although it is still being operated by Ukrainian staff.

The International Atomic Energy Agency (IAEA) has issued an urgent plea to Russia and Ukraine to quickly allow experts to visit the sprawling Zaporizhzhia complex to stabilize the situation and avoid a nuclear accident. 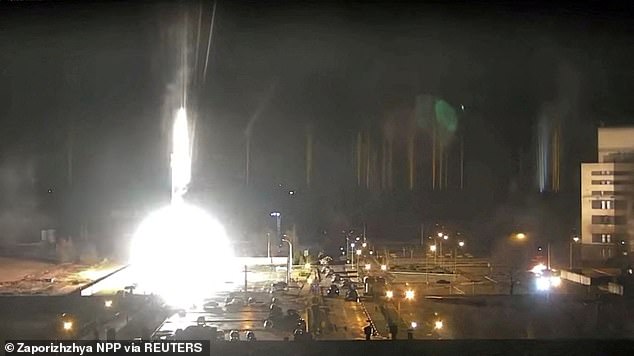 The United Nations nuclear chief warned that Europe’s largest nuclear power plant in Ukraine ‘is completely out of control’, raising fears of another Chernobyl. Pictured: Surveillance camera footage shows a flare landing at the Zaporizhzhia nuclear power plant during shelling in Enerhodar, Ukraine March 4 – in the early days of Russia’s invasion 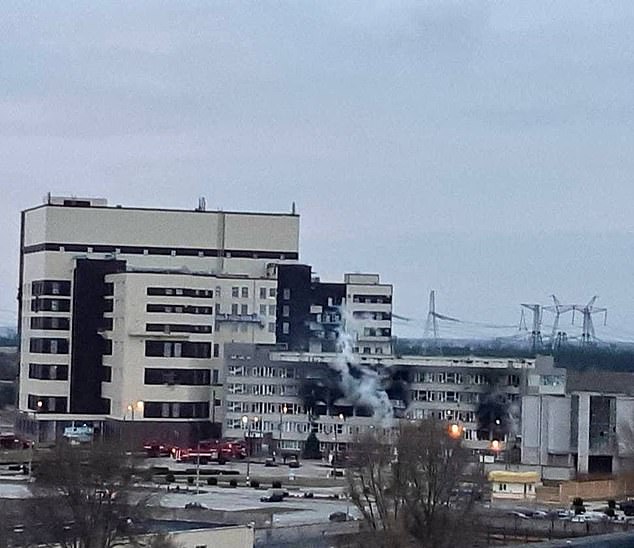 Whether this visit takes place remains to be seen, with the MoD posting an update today about the power plant after five months of Russian occupation.

On it’s daily intelligence update on Twitter, the MoD said: ‘Following five months of occupation, Russia’s intentions regarding the Zaporizhzhia Nuclear Power Plant remain unclear. However, the actions they have undertaken at the facility have likely undermined the security and safety of the plant’s normal operations.

‘Russian forces are probably operating in the regions adjacent to the power station and have used artillery units based in these areas to target Ukrainian territory on the western bank of the Dnipro river.

‘Russian forces have probably used the wider facility area, in particular the adjacent city of Enerhodar, to rest their forces, utilising the protected status of the nuclear power plant to reduce the risk to their equipment and personnel from overnight Ukrainian attacks.’

Earlier this week Bridget Brink, the US ambassador to Ukraine, said there were ‘credible reports’ that Russian troops are using the site ‘as the equivalent of a nuclear shield, firing at Ukrainians from around the plant’. 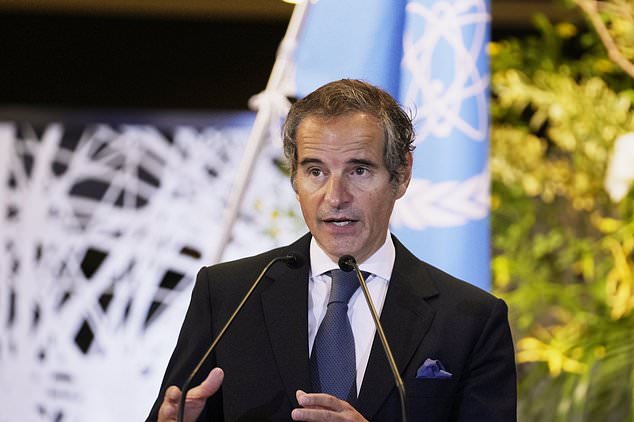 Rafael Grossi (pictured speaking in May), director general of the IAEA, said in an interview that the situation is getting more perilous every day at the Zaporizhzhia plant 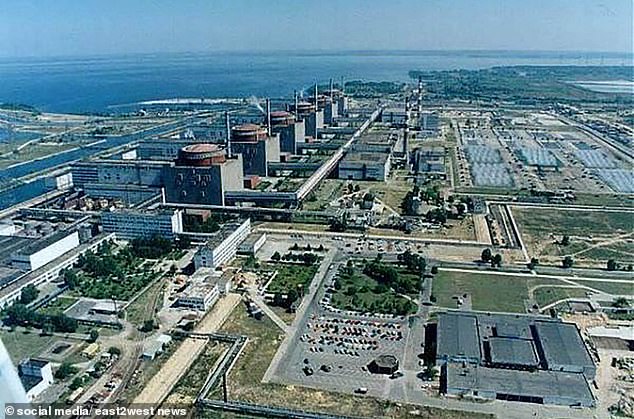 Zaporizhzhia has six nuclear reactors, making it the largest of its kind in Europe, and accounts for about one quarter of Ukraine’s power generation

Rafael Grossi, director general of the IAEA, said in an interview Tuesday that the situation is getting more perilous every day at the plant in the south-eastern city of Enerhodar, which Russian troops seized in early March, soon after their February 24 invasion of Ukraine.

‘Every principle of safety has been violated one way or the other. And we cannot allow that to continue,’ he said.

‘What is at stake is extremely serious and extremely grave and dangerous.’

Grossi cited many violations of the plant’s safety, adding that it is ‘in a place where active war is ongoing’.

The physical integrity of the plant hasn’t been respected, he said, citing shelling at the beginning of the war when it was taken over and continuing information from Ukraine and Russia accusing each other of attacks at Zaporizhzhia.

There is ‘a paradoxical situation’ in which the plant is controlled by Russia, but its Ukrainian staff continues to run its nuclear operations, leading to inevitable moments of friction and alleged violence, he said.

While the IAEA has some contacts with staff, they are ‘faulty’ and ‘patchy,’ he said.

Grossi said the supply chain of equipment and spare parts has been interrupted, ‘so we are not sure the plant is getting all it needs.’

‘When you put this together, you have a catalog of things that should never be happening in any nuclear facility,’ Grossi said.

‘And this is why I have been insisting from day one that we have to be able to go there to perform this safety and security evaluation, to do the repairs and to assist as we already did in Chernobyl.’ 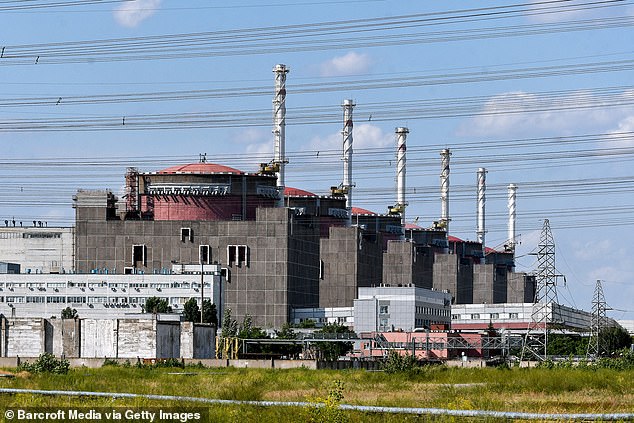 Pictured: Zaporizhzhia’s six reactors are shown in this 2019 photograph 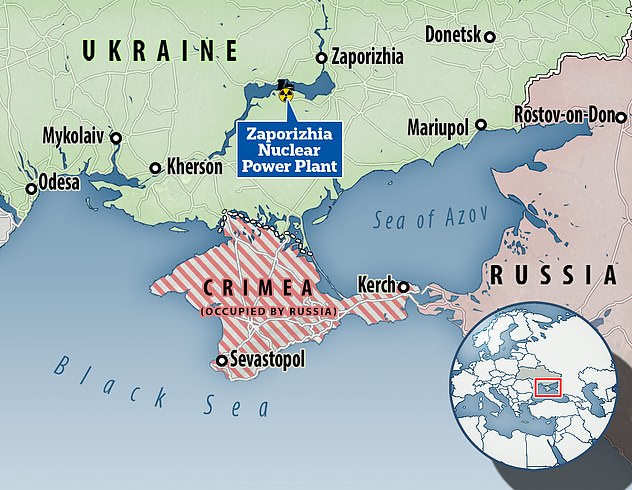 On Monday, US Secretary of State Antony Blinken accused Moscow of using the plant as a ‘military base to fire at Ukrainians, knowing that they can’t and won’t shoot back because they might accidentally strike a nuclear… reactor or highly radioactive waste in storage.’

‘That brings the notion of having a human shield to an entirely different and horrific level,’ he said.

The Russian capture of Zaporizhzhia renewed fears that the largest of Ukraine’s 15 nuclear reactors could be damaged, setting off another emergency like the 1986 Chernobyl accident, the world’s worst nuclear disaster, which happened about 65 miles north of the capital Kyiv.

Russian forces occupied the heavily contaminated site soon after the invasion but handed control back to the Ukrainians at the end of March.

Grossi visited Chernobyl on April 27 and tweeted that the level of safety was ‘like a ‘red light’ blinking.’ But he said Tuesday that the IAEA set up ‘an assistance mission’ at Chernobyl at that time ‘that has been very, very successful so far.’

The IAEA needs to go to Zaporizhzhia, as it did to Chernobyl, to ascertain the facts of what is actually happening there, to carry out repairs and inspections, and ‘to prevent a nuclear accident from happening,’ Grossi said. 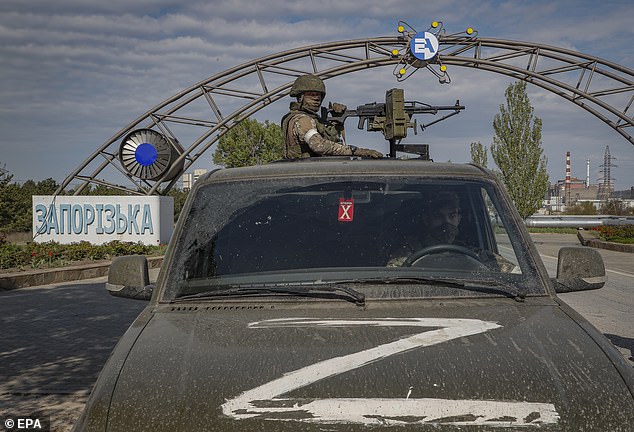 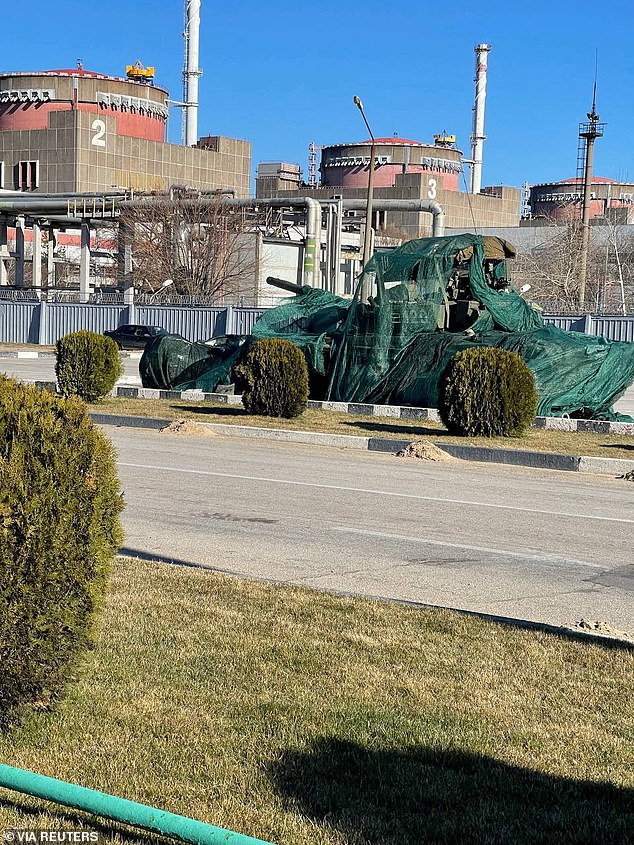 A Russian tank covered in green sheets outside the power plant. The UK Ministry of Defence has said Russia is using the power plant as a place to store equipment safe from Ukrainian strikes

The IAEA chief said he and his team need protection to get to the plant and the urgent cooperation of Russia and Ukraine.

Each side wants this international mission to go from different sites, which is understandable in light of territorial integrity and political considerations, he said, but there’s something more urgent and that is getting the IAEA team to Zaporizhzhia.

‘The IAEA, by its presence, will be a deterrent to any act of violence against this nuclear power plant,’ Grossi said.

His organization has been trying for weeks to send a team to inspect the plant. Ukraine has so far rejected the efforts, which it says would legitimize Russia’s occupation of the site in the eyes of the international community.

‘Going there is a very complex thing, because it requires the understanding and cooperation of a number of actors,’ particularly Moscow and Kyiv, as well as the backing of the United Nations since the plant is in a war zone, Grossi explained. 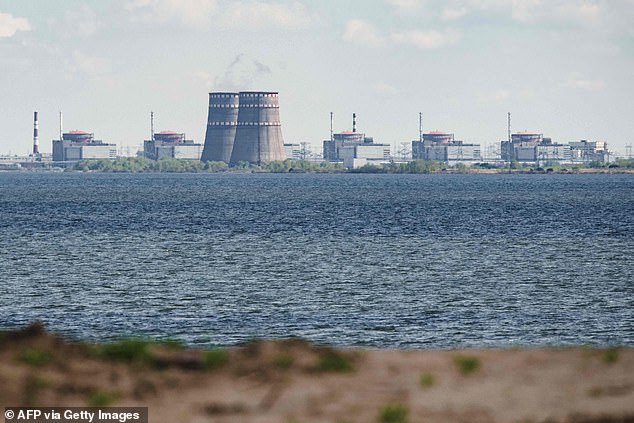 There are warnings that the power plant, which lies on the banks of the Dnipro river, is ‘out-of-control’ and fears a Chernobyl-like incident could take place 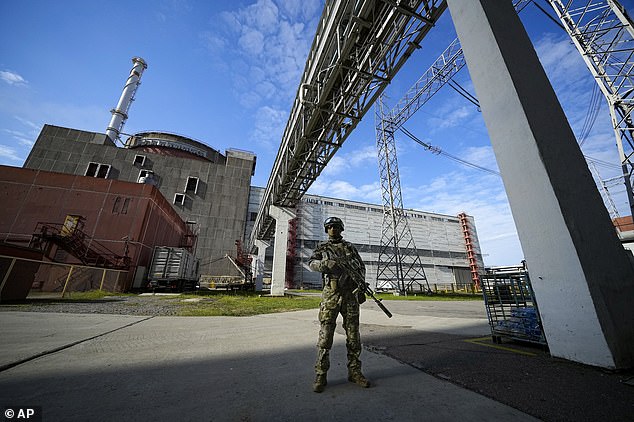 A Russian soldier stands guard in the grounds of Zaporizhzhia Nuclear Power Plant in May. Although the plant remains operational, there are concerns the Russian occupation has undermined security and safety at the station

‘I’m trying to put a mission back together to go there as soon as I can.’

Grossi was in New York to deliver a keynote speech at Monday’s opening of the long-delayed high-level meeting to review the landmark 50-year-old Nuclear Nonproliferation Treaty aimed at preventing the spread of nuclear weapons and eventually achieving a nuclear-free world.

In the interview, the IAEA chief also spoke about efforts to revive the 2015 nuclear deal between Iran and major powers that the Trump administration abandoned in 2018 and the Biden administration has been working to renew.

Grossi said there is ‘an ongoing effort to try to go for yet another meeting or round to explore possibilities to come to an agreement.’ He said he heard the meeting ‘could be soon.’

Blinken told the NPT review conference on Monday that Iran ‘has either been unwilling or unable’ to accept a deal to return to the 2015 agreement aimed at reining in its nuclear program. 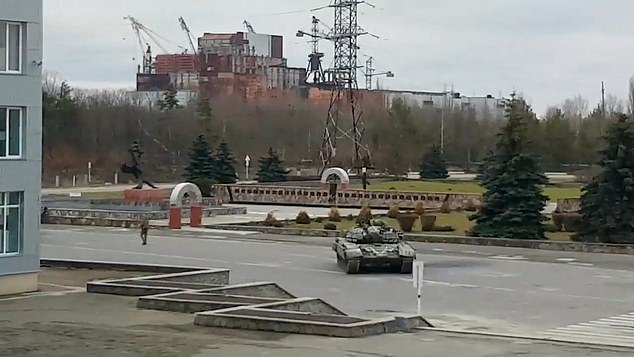 CHERNOBYL: A Russian tank is seen in the contaminated Ukrainian city in the early days of the war, and before the northern parts of Ukraine were re-taken by Kyiv’s forces 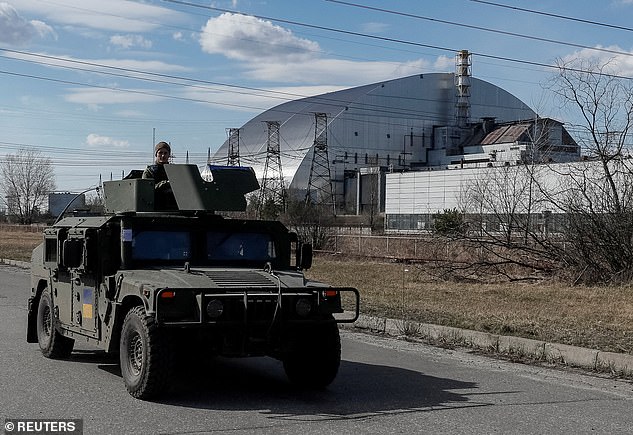 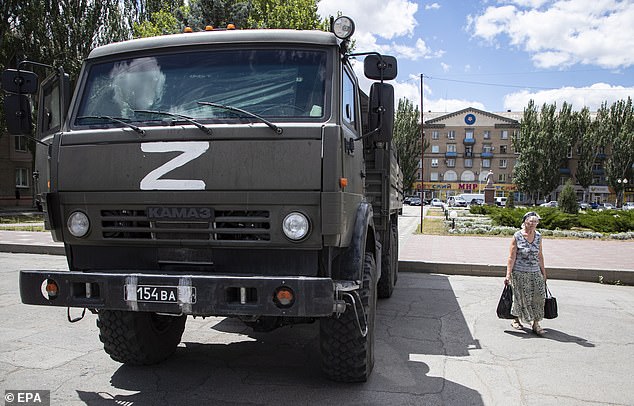 Pictured: A picture taken during a visit to Melitopol organized by the Russian military shows a woman walking past a Russian military truck in downtown Melitopol, Zaporizhzhia region, southeastern Ukraine, 14 July 2022

Grossi said ‘there are important differences among the negotiating parties’ and important verification issues related to past activities that Iran needs to address. ‘It’s not impossible, it’s complex,’ he said.

If the nuclear agreement, known as the JCPOA, is not extended, he said some IAEA inspections will continue. But the JCPOA provides for additional transparency and inspections ‘which I deem as extremely important, very necessary, because of the breadth and depth of the nuclear program in Iran,’ he said.

Grossi stressed that cooperating with the IAEA, answering its questions, allowing its inspectors to go wherever they need to be, is essential for Iran to build trust and confidence. ‘Promises and good words will not do,’ he said.

On another issue, Grossi said last September’s deal in which the United States and Britain will provide Australia with nuclear reactors to power its submarines requires an agreement with the IAEA to ensure that the amount of nuclear material in the vessel when it leaves port is there when it returns.

He said Australia hasn’t decided what type of vessel it will be getting, so while there have been preparatory talks, substantive talks can’t begin.

Because it’s a military vessel, Grossi said, ‘there are lots of confidential and protection of information measures that need to be embedded into any such agreement, so it’s very complex technologically.’