Sadiq Khan launches second mayoral term with £7m ‘Let’s Do London’ campaign to attract staycationers to the capital as opening hours are extended at museums, galleries and music venues

Sadiq Khan is starting his second term as Mayor of London by announcing the ‘biggest domestic tourism campaign the capital has ever seen’.

Labour incumbent Mr Khan is formally signing in for a second term on stage at Shakespeare’s Globe this morning as he unveils the £7 million-plus ‘Let’s Do London’ campaign as an immediate priority.

The programme, which has been developed and funded in partnership with the city’s hospitality, culture, and retail industries, is aimed at bringing in a wealth of domestic tourism to help London’s economy get back on its feet as Covid-19 restrictions are eased.

The features will range from celebrations of London’s food offerings, to a variety of new public art installations including a redesign of Transport for London’s iconic ‘Hockney Circus’ roundel in a special artwork from David Hockney.

In summer, the city’s museums, galleries and cultural and grassroots music venues will have extended opening hours, while major creative festivals such as London Fashion Week will return to the capital in autumn. 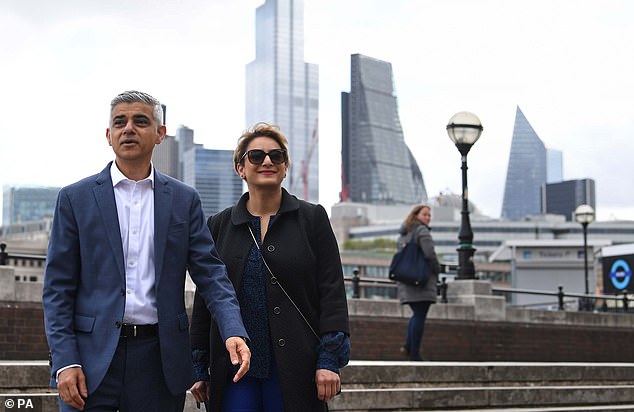 Mayor of London Sadiq Khan, with his wife Saadiya, arrive for his signing in ceremony at Shakespeare’s Globe Theatre on London’s Southbank

More features of Let’s Do London will be announced as the campaign continues to develop.

Mr Khan, who was re-elected after seeing off Conservative rival Shaun Bailey in last week’s election, will stress that the programme has been developed with Covid safety protocols in mind.

He will be urging Londoners to take up the vaccine as soon as they are offered it.

As well as launching Let’s Do London, Mr Khan will confirm getting Londoners back into work as a top priority. 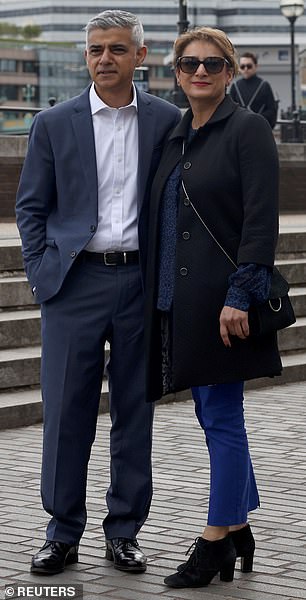 Mr Khan, who was re-elected after seeing off Conservative rival Shaun Bailey in last week’s election, will stress that the programme has been developed with Covid safety protocols in mind

Mr Khan is expected to say: ‘Today I am at the iconic Shakespeare’s Globe to launch ”Let’s Do London” – the biggest domestic tourism campaign London has ever seen to champion our businesses, cultural institutions and attractions that have suffered so much during the pandemic.

‘This is about getting the message out to Londoners and people across the country that our capital stands ready to entertain, inspire and enthral once again.

‘Our new campaign is bringing together many of the capital’s leading organisations and venues to offer an unparalleled experience for anyone visiting the capital throughout the year.

‘With restrictions on international travel likely to continue this year, Londoners and visitors from the UK have a unique opportunity to experience all the capital has to offer without the queues. In doing so you’ll be providing vital support for our world-leading venues as they start to re-open and need our help more than ever.’

He will also outline his mission for his second term as ‘creating a fairer, greener and more prosperous city, where everyone gets the opportunities they need to fulfil their potential’.

‘As well as focusing on the urgent task of London’s recovery and investing in jobs and skills, I promise to continue putting everything I have into tackling the long-standing issues that matter most to Londoners, including making our streets safer, building more affordable homes and tackling the twin emergencies of air pollution and climate change.’