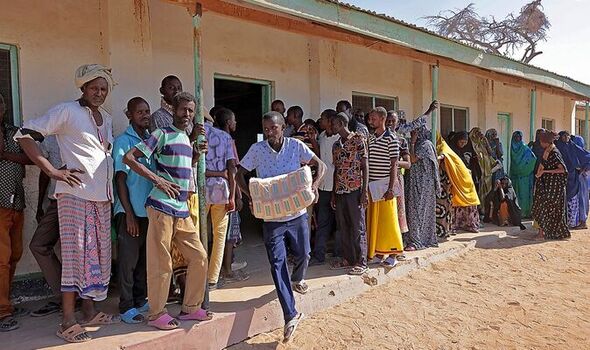 Oxfam sounded the alarm yesterday over the desperate situation in drought-ravaged parts of Somalia, Ethiopia and Kenya following four failed rainy seasons. The chilling warning came as a Daily Express team travelled deep into north-east Kenya with the Red Cross to file a special report on the drought and resulting hunger crisis.

The group arrived in the remote village of Sericho, Isiolo County, where the pastoralist community’s livelihoods have been devastated by the drought.

Animal carcasses and sunbleached bones litter the arid plains surrounding the town and the loss of thousands of cattle to starvation and thirst has left many farmers without their source of food, milk and income. Emergency food supplies provided by the county government were being handed out on Thursday including rice, maize flour and cooking oil.

Sericho’s chief Mohamed Rashid told the Daily Express: “The situation with the drought has become too severe for us, too harsh.

“The only support for our economic activities and our livelihoods is being threatened. This drought has been here with us for three years, we never get enough rain.

“People here now are looking for food for both themselves and their children, and their livestock. The humans have no food to eat. The women and children are suffering.”

Oxfam’s analysis suggested that the situation in East Africa has deteriorated since May, when it was estimated that one person was dying of hunger every 48 seconds.

The crisis has been exacerbated in many places by conflict, the fallout from Covid-19 and rising food prices due to the war in Ukraine.

Somalia is now in the grip of its worst hunger crisis in living memory. The number of people experiencing acute hunger there has surpassed the number affected in the famine of 2011, when more than a quarter of a million people died.

Almost one in six people in Somalia are now experiencing extreme hunger. Across four countries, including South Sudan, more than six million children face or are suffering from acute malnutrition.

Richard Blewitt, executive director of international at the British Red Cross, said: “Right now, 146 million people do not have the food they need to keep going. This is what breaking point looks like.

“The international community came together in 2017 to avert a catastrophe in this region, we can, and must, do this again.”