Turtles are said to be slow but they can be remarkably difficult to catch in the wilds of northern Victoria.

The reptile's evasiveness is no doubt a survival mechanism, but their pursuers aren’t intent on making turtle soup or snaring a pet for their home menagerie.

They’re scientists who have been affixing electronic tracking devices on two species of turtle then releasing them, as part of studies they hope will contribute to the species’ survival. 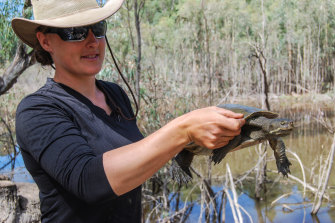 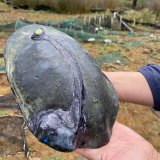 An eastern long-necked turtle fitted with a GPS data-logger.

The devices record turtles’ location co-ordinates every three hours and save the information to a memory card.

When it’s time for researchers to download data from the devices, they must find each creature.

Researchers are combing the Barmah-Millewa forest region, 250 kilometres north of Melbourne, with antennas and a receiver, listening for the devices which emit VHF radio signals.

But Ms Howard said it had been "quite tricky" because flooding had dispersed the turtles. This week, the scientists are hoping to go up in a plane to continue the search.

Ms Howard said once a signal was pinpointed, they would go to the location on foot.

"The best way to trap the turtle is to surround them with a stop net – a solid net hanging in the water," she said.

"However, once you surround it, you have to get in the area and chase it around and catch it by hand. Eventually, the turtle will bump in to somebody and you grab them."

The scientists have caught 29 Murray River turtles so far and aim to catch another six in the next few weeks. They affixed acoustic transmitters – which can last up to 10 years – to the turtles’ shells.

The transmitters on the turtles emit pings that are detected by underwater receivers when they go past – similar to a CityLink toll gantry. There are about 35 receivers in the Barmah-Millewa forest region.

The projects are supported by the Yorta Yorta Nation Aboriginal Corporation and Victorian and New South Wales parks and environment departments.

Ms Howard said both species’ numbers were declining because of factors such as foxes raiding nests.

The Murray River’s flow is controlled by humans, and the turtle studies can help determine how to time environmental water flows in a way that would benefit the animals.

"We hope to learn how increased rainfall might influence turtle behaviour."

She said turtles played important roles in ecosystems and maintaining the health of the river.

"And as they’re declining [in number], it’s important to know how we can reverse those declines," Ms Howard said.

"Research is the best way of understanding how human activities impact them and how we can minimise that."

Find out the next TV shows, streaming series and movies to add to your must-sees. Sign up to get it every Thursday.