The 15-year-old victim suffered concussion after the assault, which happened on Saturday in Dublin city centre. In the footage, shared on social media, the girl is seen being pushed to the ground before a barrage of kicks and punches rain down on her from all angles.

Up to ten young thugs are seen piling into the melee with the poor girl caught at the bottom.

The girl was eventually rushed to hospital with concussion and severe bruising.

But a source close to her told Dublin Live she is now recovering at home.

She said: “She’s okay now, she’s bruised and has lumps all over her head, her eye is swollen and her neck is very sore.

“They took lumps of her hair out. They gave her a bad concussion – but it could have been a lot worse.

“The family just wants to get this out. We can’t believe it happened. It’s a horrible world out there.” 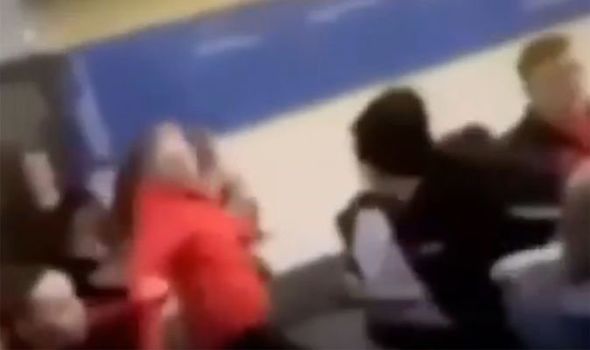 Police are investigating the shameless beating.

A spokesman said: “Gardai are investigating an incident of assault which occurred in Temple Bar Square at approximately 10:30pm, 5 June 2021.

“A female juvenile teen was taken to Temple Street Children’s Hospital to be treated for non-life threatening injuries. Enquiries are ongoing.”