Singapore: A leading health expert in Singapore says Australia shouldn’t be concerned about opening a travel bubble with the south-east Asian city state for vaccinated passengers despite a recent outbreak.

Australia’s Prime Minister, Scott Morrison, is due to visit the small island nation next Thursday to meet with Singapore’s Prime Minister Lee Hsien Loong en route to the G7 summit in the UK. 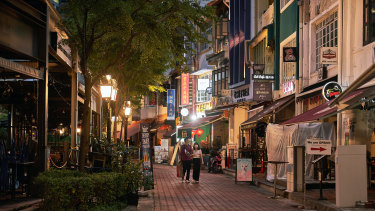 Hopes for a travel bubble with Australia: pedestrians walk along a deserted street in the deserted Boat Quay area of Singapore,.Credit:Bloomberg

The prospect of a reciprocal travel channel between the countries later this year will not be the only subject of the talks with one of Australia’s closest partners in the Indo-Pacific. Morrison is seeking to connect with his Singaporean counterpart amid continuing tension with China and assertiveness in the region by the superpower.

However, Singapore, which is home to more than 20,000 Australians, has been very keen to convince Australia to create a bubble similar to the one it established with New Zealand in April.

A spike in COVI9-19 cases and variants last month in Singapore was a setback for that ambition, thwarting the launch of its own travel bubble with Hong Kong again and sending the country into partial lockdown. 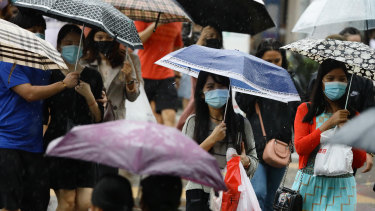 Protected but not over-protected: masked people in the rain in Singapore.Credit:Getty

There were 24 new cases here up to midday on Wednesday including five unlinked to previous cases. However, with more than 30 per cent of Singpore’s population already fully vaccinated and testing being intensified with rapid tests, breathalysers and the introduction of home kits, the Lee government hopes to relax restrictions on June 13.

Jeremy Lim, director of the Leadership Institute for Global Health Transformation at the National University of Singapore’s Saw Swee Hock School of Public Health, believes that by the end of the year Singapore will almost certainly have multiple travel bubbles in place with countries that have low case numbers and high vaccination rates.

Australia doesn’t qualify in the latter category yet but Singapore has already been letting in Australians for months without having to quarantine. The Australians only have to isolate until they test negative.

“We were fully prepared to have a travel bubble with Australia without quarantine even before there were vaccines,” Lim said.

“So if the numbers remain very low, the only thing that has changed is there are a heck of a lot more Singaporeans vaccinated, which is a good thing. I don’t see why Singapore should be concerned about Australia and vice versa.” 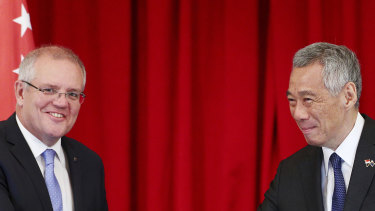 Singapore has a 21-day hotel quarantine period in place at the moment for arrivals from most countries but as the vaccination process evolves – school students aged 12 and up are able to be get the jab from this month’s school holidays – the goalposts are likely to change.

Lim sees Singapore as a candidate for countries that are at high risk but not out of control, including countries where vaccination rates haven’t crossed thresholds for herd immunity

“I suspect Singapore would be very willing to figure out how to have fully vaccinated people able to travel to Singapore and have some sort of shortened quarantine,” Lim said.

Singapore should be able to catch cases either at the border or very early on given the very aggressive testing regime that the Lee government is proposing, he said.

The only barrier to Singapore opening up to nations with high vaccine rates, he said, would be if it could not secure enough vaccines for most of the population or if case numbers surged during summer in the United States, UK and Europe.

In a national address on television and online this week, Lee said Singapore had to be ready to “carry on with our lives even with a virus in our midst”.

“Living with an endemic COVID-19 also means we don’t completely close our borders,” he said. “We need food, essential supplies, workers, business and other travellers to keep on flowing.”

“We will not be able to prevent some infected persons from slipping through from time to time but as long as our population is sufficiently vaccinated we should be able to trace, isolate and treat the cases that pop up.“

“We must stay connected to the world.”