Man with the golden bum: Smuggler is caught with 2lb of gold worth $60,000 in his backside after customs officers spotted his unusual walk at Indian airport

A smuggler was caught with 2lb of gold worth £46,000 in his bottom after customs officers spotted his unusual walk at an airport in India.

The man was travelling on a GoAir flight from Dubai into Kerala’s Kannur airport and had hidden the stash of gold inside his own body to avoid paying the 18 per cent tax.

It is believed he had been walking awkwardly and was stopped and checked as a result where the gold was discovered by officials from the Air Intelligence Unit (AIU), who also shared images of the precious metal which had been recovered. 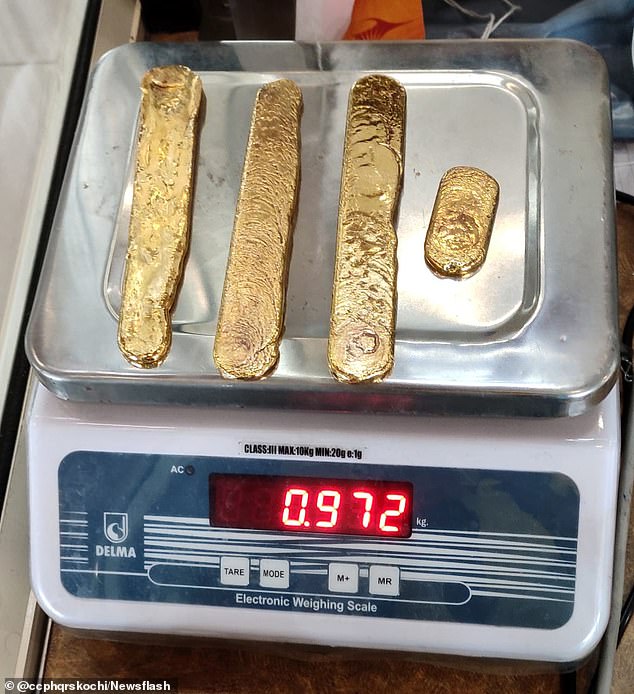 Almost 1 kg of gold extracted from a passenger who arrived from Dubai in Kannur city, India

Police said another man on the same flight was stopped from trafficking 3.2lb (1.47kg) of gold into India.

However, they did not reveal how he concealed the precious metal, The National reported.

They were the latest in a number of seizures of gold being smuggled into the country from Arabic states.

Customs officials said that most people try and bring the gold in by hiding it in chocolate boxes, purses, umbrellas or other objects like pens.

They also caught this month people with gold hidden in toothpaste and one person who had lined their underwear with the precious metal.

Earlier this year, customs officials in Kerala found 30kg of gold with a value of £1.47million hidden in cylindrical locks.