There is a cold wind blowing through China. There are more coronavirus cases than the first outbreak in Wuhan, soybean prices have jumped by 30 per cent and shoppers are stockpiling vegetables and toilet paper.

The signs are ominous ahead of temperatures forecast to fall by up to 16 degrees in some regions as a Siberian gale sweeps through the country. 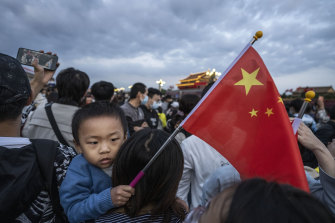 A boy holds a Chinese flag as people gather next to Tiananmen Square on October 1. Credit:Getty

China, for so long a beacon of strong pandemic management, is suddenly looking vulnerable.

Its economy is slowing, energy and food prices are rising and lockdowns are re-emerging. Beijing has largely been sealed off from the rest of the country after a further 68 cases were recorded on Friday. More than 20 cities stopped selling train tickets to the capital this week, while hundreds of commuters on trains last week were forced into quarantine after an attendant tested positive.

Primary school children in Beijing have been bused off to quarantine after one student tested positive for COVID-19. Some 34,000 people were locked in and tested at Disneyland in Shanghai after a case there. Neighbourhoods are signing up residents to coronavirus “battle assignments” to help staff testing centres. 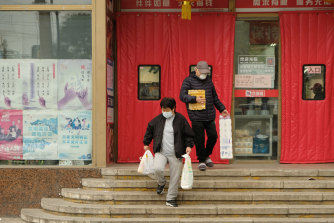 Shoppers in Beijing have been stockpiling essential items. Credit:Sanghee Liu

As the rest of the world opens up, China is locking down. Chinese consumers are spooked. Lines formed at shops and supermarkets around the country this week after the Ministry of Commerce told residents to stock up on a “reasonable number of daily necessities” as the country heads into a COVID-winter. The familiar pandemic essentials – toilet paper, meat for the freezer, veggies and rice, are suddenly in short supply.

Yao Qin, the owner of a parcel collection and delivery point, said schools in his city of Changzhou were suddenly shut down after two cases were reported on planes on November 2.

“It caused people concerned about the pandemic to start buying life necessities,” Yao said. “Thanks to the ministry on the same day, more people joined the shopping chaos.”

Yao said he had stockpiled oil and eggs.

“The vegetable price has been rising rapidly. One of my neighbours got her vegetables that she planted on a small yard in the compound stolen yesterday.” 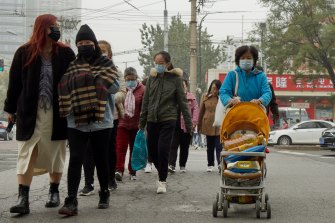 A shopper in Beijing transports cooking oil in a pram. Credit:Sanghee Liu

Chinese vinegar, seasoning and fresh food giants all announced they would be raising prices, adding up to 10 per cent as supply shortages and the rising cost of raw ingredients, triggered by transport restrictions and poor weather, put a strain on deliveries.

A photo of a man transporting a whole pig on the back of his bicycle went viral on Weibo on Thursday, taken as a sign that meat was running out. 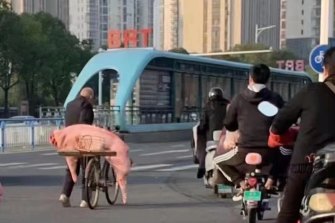 A man transports a pig he bought on the back of his bike in China. Credit:

State media attempted to quell fears by running headlines that said, “No widespread panic buying is spotted in major Chinese cities”. Others lauded the close attention of citizens to government directions but said their panic was “completely unnecessary”. “[The suggestion to stock up] is related to epidemic control measures.”

But it did little to calm jittery nerves after months of China living effectively without COVID-19. More than 1 billion people in China have been fully vaccinated by the Sinovac and Sinopharm vaccines.

The stockpiling notice from the ministry spread online where it was picked up by Chinese nationalists and other communities worried that it was not COVID that residents needed to be prepared for, but war with Taiwan. On Weibo, a post listing emergency equipment used by families in Xianmen, a city close to Taiwan, went viral. The nationalist tabloid, The Global Times, speculated the “notices could be a sign of [a] potential outbreak of war across the Taiwan Strait,” despite no conventional military analyst predicting an invasion is imminent.

The Chinese Communist Party has more urgent issues at the front of mind. Next week, it will host its sixth plenum in Beijing. This one, focused on the party’s history and achievements, is particularly important for President Xi Jinping who will use it to burnish his credentials as the most important leader since Mao Zedong before seeking a third term in office next year.

The COVID-zero President is unlikely to sway from his strategy until that is achieved.

The medical establishment is behind him, believing the economic benefits of elimination ultimately outweigh the costs of lockdowns.

China’s top respiratory disease expert Zhong Nanshan pointed to other countries such as Singapore which have started down the path of opening up before being forced to implement restrictions again.

“This flip-flopping approach is actually more costly,” he told CGTN. “The psychological impact on citizens and society is also greater.”