A steel tycoon who spent £50million on his daughter’s wedding claims he owes a staggering £2.5billion – which would make him Britain’s biggest bankrupt.

Pramod Mittal, 64, who lost his fortune when a financial deal turned sour, claims to have no personal income and just £45 worth of land to his name, near Delhi.

The scion of the ultra-rich Mittal steel dynasty says he owns assets of just £110,000 and wants to agree a deal to pay back his creditors just 0.18p for every pound he owes. 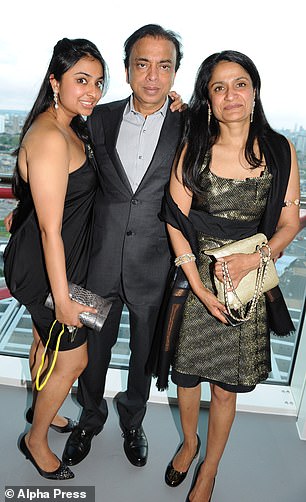 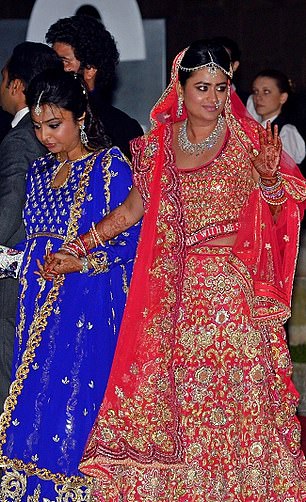 Pramod Mittal (middle left, with his wife Sangeeta) spent £50m on his daughter Shristi’s wedding (she is pictured in the red dress at the event in Barcelona) 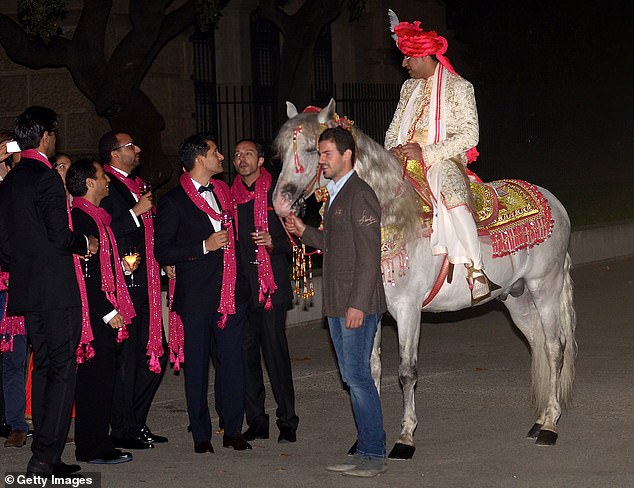 Mr Mittal – whose brother Lakshmi is believed to be worth £7bn – was declared bankrupt this summer, reported The Times.

The businessman set out his financial situation in an individual voluntary arrangement, in which he claims the loans he originally took out have ballooned dozens of times over due to interest payments.

Mr Mittal said: ‘I have no personal income. My wife is financially independent from me. We have separate bank accounts and I have very limited information regarding her income.’

He estimates his monthly spending at £2,000 to £3,000 and claims his family home belonged to an offshore company in which he had ‘no financial interest’.

The roots of Pramod’s current troubles date back 14 years, when he agreed to act as a guarantor for the debts of a coke producer in Bosnia known as GIKIL, a partnership between his Isle of Man-registered Global Steel Holdings and the Bosnian state.

In a deal that would prove to be devastating, he and Global Steel Holdings signed an agreement to guarantee GIKIL’s debts.

GIKIL subsequently failed to make repayments to a steel trading firm in London. 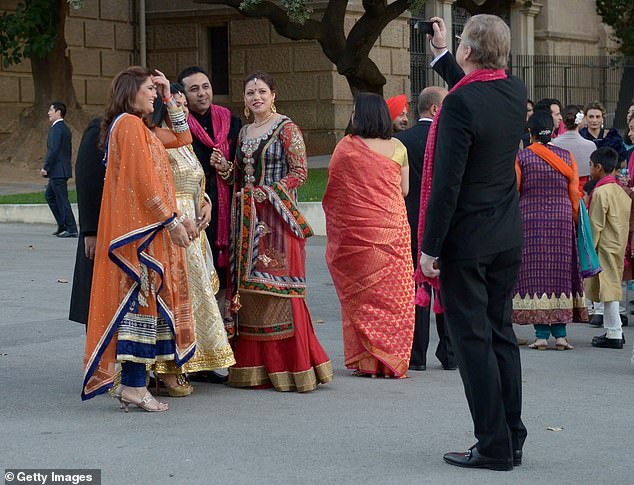 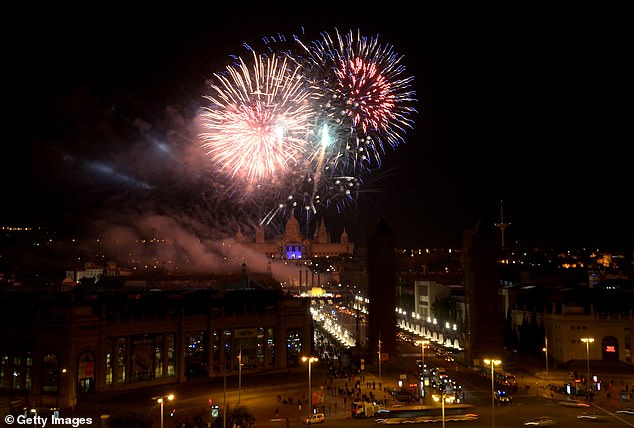 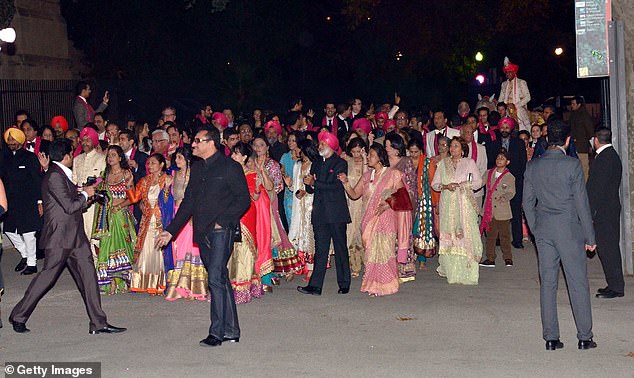 That debt was then pursued by a company named Moorgate Industries, which obtained the bankruptcy order.

The company has described the proposed bankruptcy agreement as shameful.

It is certainly a humiliation for a steel tycoon who was famous for his big spending.

In 2013, he spent £50m on his daughter Shristi’s wedding to Dutch-born investment banker Gulraj Behl.

That was £10m more than his older brother Lakshmi had on a ceremony for his own daughter Vanisha at the Palace of Versailles in 2004.

And as if his phenomenal debts were not enough, Pramod also found himself entangled in a probe into organised crime in the formerly war-torn Balkan state of Bosnia. He was arrested last year and released on bail of ¤1m.

Despite the enormous sums involved, Lakshmi could easily afford to bail out his younger brother. 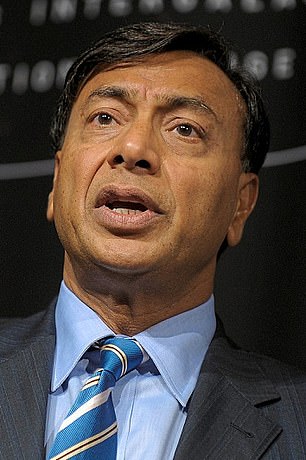 Despite the enormous sums involved, Pramod’s tycoon brother Lakshmi could easily afford to bail him out

His Luxembourg-based Arcelor Mittal steel business is valued at just over £9billion on the stock market, making his holding worth more than £3billion.

He also owns a 20 per cent stake in Queens Park Rangers football club and has an estimated £6.8billion hoard, according to the latest Sunday Times Rich List.

In the past, he has put his hands in his capacious pockets to help out Pramod. And sources close to Lakshmi deny that the brothers are estranged.

One said: ‘If there was any disagreement, it was a long time ago when Lakshmi set out [in business] on his own. But any tensions back then have been smoothed over long ago.

‘Lakshmi is the most successful member of the family and he has provided considerable financial support to them for years.

He feels for his brother but thinks on this occasion that he should not step in and his brother should sort this out himself.’

Be that as it may, the sordid business of bankruptcy and Bosnian scandal were far from anyone’s mind six years ago at Shristi’s wedding extravaganza in Barcelona.

Pramod chose to stage the event there because of his love for the famous Catalan modernist architect, Antoni Gaudi.

The celebrations, which stretched over three days in early December, began with a welcome dinner in Barcelona’s maritime museum.

On the second day, the 500 guests – who were reported to have been asked to sign confidentiality agreements – were treated to a water and light display at the Magic Fountain in the Montjuic district, accompanied by the theme tune to Chariots Of Fire and an equestrian show with Andalusian and Arabian horses.

The ceremony itself took place in the Oval Hall of the National Museum of Catalan Art, which houses works by Titian and the great Spanish painter Velazquez. 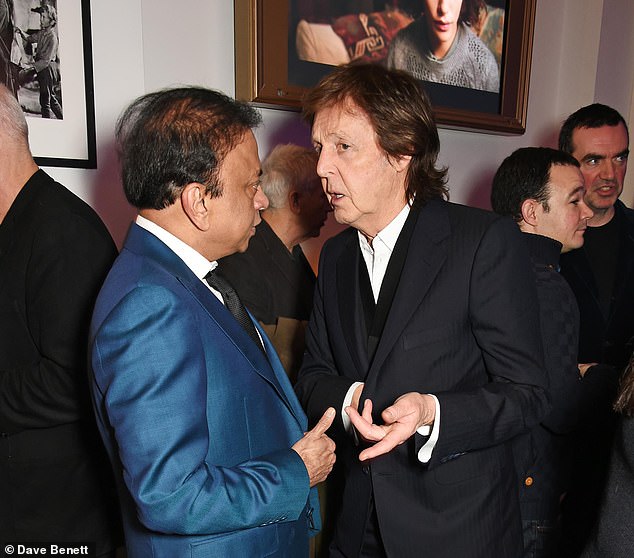 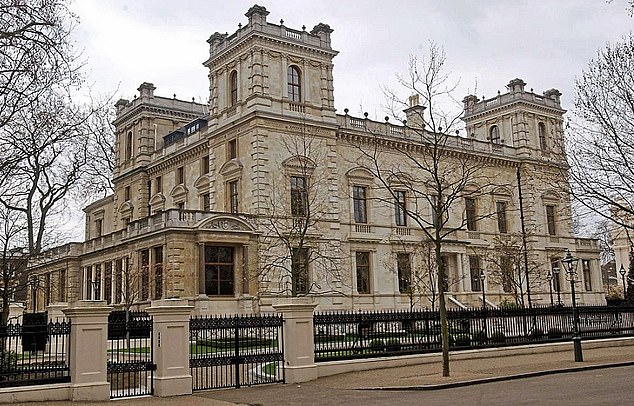 The menu was presided over by double-Michelin starred Catalan chef Sergi Arola, who trained with Ferran Adria of the legendary El Bulli restaurant.

Pramod had already played host to one overblown wedding, for his elder daughter Vartika.

She was married in a lavish ceremony at the Ciragan Palace in Istanbul in another three-day affair in 2011, described as being grander than Prince William’s wedding to Kate Middleton the same year.

The Mittal family fortunes stem from the steel empire founded by their father Mohan in India in the 1950s.