Tremors from the quake have been felt as far away as Hong Kong.

The Hong Kong Observatory, which is a weather forecast agency of the government of Hong Kong, wrote on Twitter: “The Observatory received reports of locally felt earth tremors.”

There have been no immediate reports of injuries or substantial damage to structures.

The Taipei City Government has confirmed the subway system is operating as normal with no immediate reports of any issues.

But the Twitter account NERV, which posts disaster information and warnings for Japan, warned of the “possibility of a tsunami”. 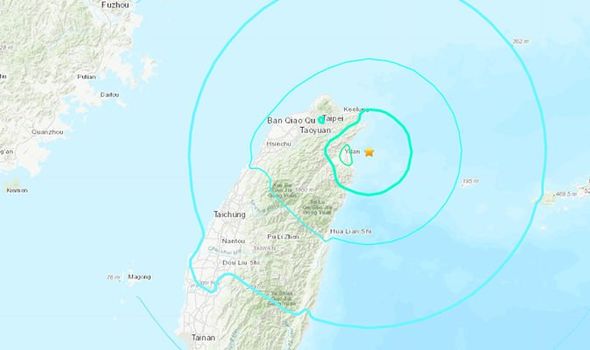 The service tweeted: “At around 10:19pm, a magnitude 6.2 earthquake occurred near Taiwan at a depth of 100km.

A short while later, NERV tweeted: “An earthquake occurred near Taiwan at around 10:19pm.

“If the earthquake occurred offshore, there is a possibility of a tsunami.

“As a precaution, stay away from rivers, lakes, and beaches until we have more information.”

Taiwan, which is a self-ruled island that China has claimed ownership of, is a hotspot for earthquakes as it is located near the junction of two tectonic plates.

In 1999, more than 2,000 people were killed after a huge 7.3 magnitude earthquake struck the country.

Four years ago in 2016, over 100 people died following an earthquake in southern Taiwan.