Home » Thailand’s prime minister is fined for not wearing a mask. 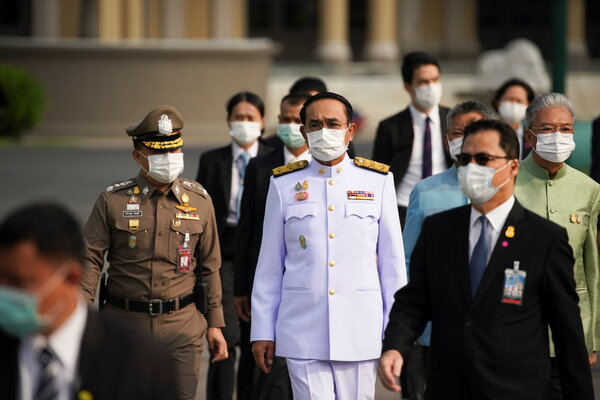 With Thailand struggling to bring its worst coronavirus outbreak under control, Bangkok made it compulsory for residents to wear masks in public beginning on Monday. One of the first to break the new rule?

The country’s prime minister, Prayuth Chan-ocha, who was seen maskless at a government meeting in a photo published on his official Facebook page.

As a first-time offender, he agreed to pay a fine of about $190. Bangkok’s governor, Aswin Kwanmuang, came around with top police officials on Monday to help collect it.

For Mr. Prayuth, the gaffe is the least of his pandemic problems. His government has struggled to curb transmissions and slow to obtain vaccines. As infections ticked upward earlier this month, he decided to let Thais continue to travel widely during a major holiday.

“Whatever will be will be,” he said then. “The government will have to try to cope with that later.”

Now, his government is scrambling to procure vaccines from a stretched global supply and rushing to set up field hospitals at sports stadiums and other locations as many hospitals report being near capacity. Only 0.3 percent of the population has been fully vaccinated, according to a New York Times database.

On Tuesday, the government reported 15 deaths, its highest daily total since the pandemic began, and more than 2,000 new cases for the fifth day in a row. That brings Thailand’s total for the pandemic to nearly 60,000 cases and 163 deaths, according to the government.

The numbers are low by global standards; Thailand was among the world’s leaders in containing the virus last year. Nearly 90 percent of its cases have come since Jan. 1.

Many provinces have imposed their own restrictions, including Bangkok, which has ordered the closure of more than 30 types of businesses, such as fitness centers, cinemas, bars and massage parlors. Restaurants, malls and department stores can continue operating but with restrictions.

Nearly two-thirds of Thailand’s provinces have imposed fines for failing to wear a mask in public. The maximum penalty is about $635.