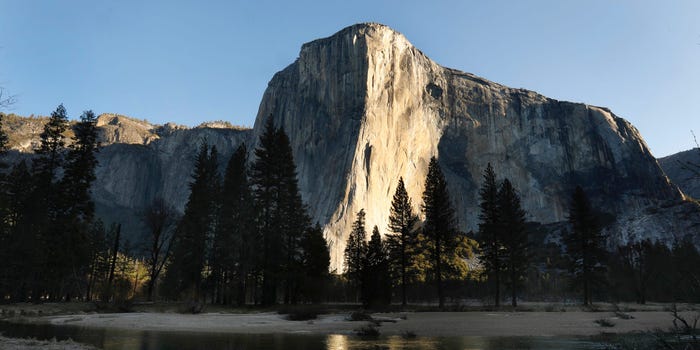 She reached the top of El Capitan, a 3,000-foot granite wall, late Wednesday night, 21 hours, 13 minutes, and 51 seconds after she started her climb.

Harrington, 34, used the free-climb method, in which a climber uses ropes to help catch them if they fall, but only using hands and feet on rock to ascend, with no help from ropes or pegs.

"I never believed I could actually free climb El Cap in a day when I first set the goal for myself. It didn't seem like a realistic objective for me," Harrington, who trains in California, said in an Instagram post about the climb. "Impossible dreams challenge us to rise above who we are now to see if we can become better versions of ourselves."

Harrington is the first woman to free-climb El Capitan's Golden Gate route in one day, following in the footsteps of three men.

But three other women have taken other routes up the wall while free climbing. Lynn Hill was the first person ever recorded to free climb El Capitan, scaling the wall on another route in 1994. Steph Davis was second in 2004, and Mayan Smith-Gobat was third in 2011.

"I think it's really important to tell the story of women climbing El Cap because it's a unique and versatile sport that sort of caters to all different kinds of athletes, all different types of people, all different body sizes," Harrington said. "Climbing is actually a sport that is for everyone truly, and I think more and more of the work is changing and we're starting to realize that inclusivity is very important."

Harrington was first introduced to climbing when she was a child, and she even had the opportunity to climb with Hill.

"When I first started climbing I was lucky enough to climb with her when I was a kid," Harrington told Insider. "Climbing is a male-dominated sport, but the fact that free climbing on El Cap was actually pioneered by a woman was something that was always really important to me as a little girl growing up climbing because I knew climbing was a space for women and a space where women could excel just as much as men."

Harrington had a serious fall on El Capitan last year, but 'always knew' she'd be back

Harrington has climbed El Capitan's Golden Gate route before, but this was the first time she climbed it in a day.

Last year Harrington had a fall on the Golden Gate route, and was hospitalized with injuries, including rope burn to her neck.

But she told Insider she "always knew" she would return, and did so early Wednesday morning.

She climbed the rock with her fiancé and Mount Everest guide Adrian Ballinger, as well as Alex Honnold, whose solo climb up El Capitan was documented in the film "Free Solo."

On one of the tougher sections of the climb she slipped and hit her head, but after ensuring the injury wasn't serious, she continued climbing.

Harrington said Honnold provided a "calm presence" on the wall who helped her cover ground quickly, while her fiancé supported her emotionally when the climb got tough near the end.

"I had this really cool combination of both of their strengths and skillsets to combine into one perfect partner," she said.

As for choosing the day after the presidential election to climb El Capitan, Harrington said it wasn't scheduled entirely on purpose, but she said the climb was a nice distraction from checking social media.

"It was sort of one of those things, I think, we all felt so much uncertainty and a lack of control," she said. "I think having something [else] to focus on was really important."

Jerusalem church suffers damage in arson near Garden of Gethsemane