London: Queen Elizabeth has cancelled a pre-Christmas lunch with her family as a precaution while cases of COVID-19 soar in Britain, a Buckingham Palace source said.

“The decision is a precautionary one as it is felt to put too many people’s Christmas arrangements at risk if it went ahead,” the source said. 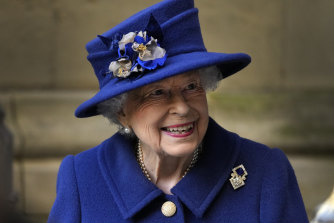 The Queen has cancelled her pre-Christmas lunch with family as COVID-19 cases rise in the UK.Credit:AP

“While there is regret that it is cancelled, there is a belief it is the right thing to do for all.”

England’s chief medical officer warned people on Wednesday not to mix with others unless they have to in the run-up to Christmas after Britain recorded 78,610 new coronavirus cases, the highest daily figure since the start of the pandemic.

Britain’s 95-year-old monarch spent the majority of the pandemic at Windsor Castle to the west of London. Her husband Prince Philip died in April this year after more than seven decades of marriage.

Spiralling infections in Britain driven in part by the new Omicron variant of the coronavirus rattled many in Europe on Thursday, fuelling a familiar dread that tighter restrictions will scuttle holiday plans.

Much remains unknown about Omicron, but increasingly officials are warning that at the very least it appears more transmissible than the Delta variant, which was already putting pressure on hospitals from the United States to the Netherlands. With so many questions outstanding, uncertainty reigned over how quickly and how severely to crack down on end-of-year travel and Christmas parties.

France announced on Thursday that it would tighten entry rules for those coming from Britain.

Globally, more than 75 countries have reported confirmed cases of the new variant. In Britain, where Omicron cases are doubling every two to three days, the variant is expected to soon replace Delta as the dominant strain in the country. Authorities in the 27-nation European Union say Omicron will be the dominant variant in the bloc by mid-January.

In addition to hints that it’s more contagious, early data suggests Omicron may be milder but better at evading vaccines – making booster shots more crucial. Experts have urged caution in particular on drawing conclusions about how mild it is because hospitalisations lag behind infections and so many variables contribute to how sick people get.

Also, even if Omicron proves milder on the whole than Delta, it may disarm some of the lifesaving tools available and put immune-compromised and elderly people at particular risk. And if it’s more transmissible, more infections overall raise the risk of more serious ones.

While experts gather more data, some governments rushed to act, while others sought to calm fears that the new variant would land countries back on square one.

Prime Minister Boris Johnson insisted on Thursday that the situation in the UK was different from last year because of the widespread use of vaccines and the ability to test.

While Professor Chris Whitty, England’s chief medical officer, advised people to limit their social contacts, putting a priority on those that are the most important, Johnson struck a less severe note.

Johnson said that if people wanted to attend an event “the sensible thing to do is to get a test and to make sure that you’re being cautious”.

“But we’re not saying that we want to cancel stuff, we’re not locking stuff down, and the fastest route back to normality is to get boosted,” he said.