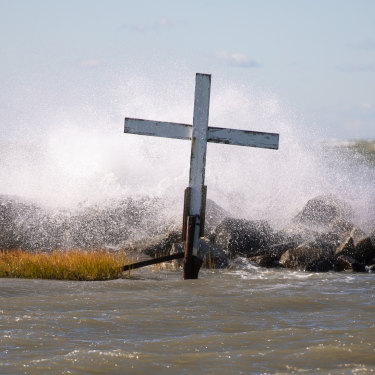 Tangier Island, Virginia: As she surveys her waterlogged front lawn, Bonnie Landon doesn’t dare think about the future. The present is upsetting enough. It’s been less than a year since her husband of almost six decades, Harold, died. Now she fears she will be forced to abandon the home they shared for their entire marriage.

Landon, 77, lives on Tangier Island, a tiny and remote community in Virginia’s Chesapeake Bay located 150 kilometres from Washington DC. The only way to reach it is by a ferry ride that takes between 45 minutes and an hour from the US mainland. Once you arrive, mobile phone service is virtually non-existent. The marshy island – which spans just three square kilometres – is so small most people get around on golf carts rather than cars. No alcohol is allowed to be sold, reflecting the deeply conservative and devoutly Christian nature of the community. 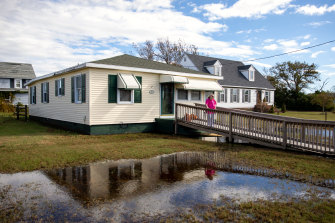 Bonnie Landon stands in front of her home amid her flooded lawn on Tangier Island in Virginia.Credit:Amanda Andrade-Rhoades

Landon’s lawn is submerged in ankle-deep water following a storm the previous night. It wasn’t an especially dramatic downpour, but because of Tangier’s low-lying topography, even minor storms can trigger heavy flooding. “This happens when the tide comes up,” Landon says. She adds that the problem has been getting increasingly bad over recent years.

While the western side of Tangier is partially protected by a break wall of rocks, the eastern side, where Landon lives, is entirely exposed to the elements. “We need a seawall bad on this side of the island,” she says, the desperation rising in her voice. “Without it, we’ll just be underwater.”

She’s not alone in her pessimism. Tangier Island is groaning under the weight of severe economic, demographic and environmental strain – so much so that its very existence is in doubt. While visitors commonly say that visiting Tangier feels like stepping into the past, scientists say it instead offers a glimpse of the future in a world of catastrophic climate change.

We’re getting washed away

According to US census data, around 1000 people lived on the island in the 1940s – a figure that has plunged to just 400 or so today. The decline is so severe experts have labelled it a “demographic collapse”.

“Most everybody who graduates high school leaves the island now,” ferry captain Mark Haynie, who was born and raised on the island, says. “There’s a lot less people around than when I was a boy.”

The island’s crab and oyster harvesters – known as watermen – are struggling to make a living because of environmental regulations and falling prices. Worst of all, an estimated two thirds of the island’s land mass has disappeared since 1850. Much of what remains are swampy wetlands that are unfit for human habitation.

“In a couple more years you might not see none of this,” waterman Clayton Parks says as he gazes at Tangier harbour’s distinctive wooden crab shanties. “We’re getting washed away.”

Until recently, Tangier was famous for two reasons: being the “soft shell crab capital of America” and the unique dialect of English that is spoken on the island. In 2015, it shot to international attention when a paper in the journal Scientific Reports predicted its residents could become some of America’s first climate refugees. According to the paper’s authors, the island may have to be abandoned within 25 years because of sea level rise associated with climate change. 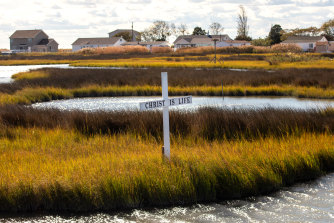 Tangier Island is a deeply conservative and devoutly Christian.Credit:Amanda Andrade-Rhoades

As world leaders prepare to meet in Glasgow for a crucial climate summit next week, Tangier Island is precisely the type of place environmentalists point to when arguing for dramatic cuts to carbon emissions.

The catch is that most of the island’s residents don’t believe that they are living on the climate change frontlines. Instead, they largely blame naturally occurring factors that have ravaged the island for centuries.

“I don’t believe it’s got anything to do with the changing climate,” Landon says of the tides she fears will one day engulf her street. 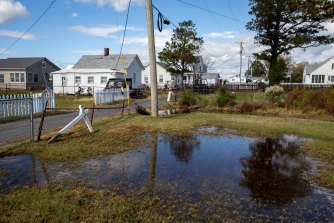 Even typical storms can cause major flooding on the streets of Tangier Island.Credit:Amanda Andrade-Rhoades

James Eskridge, Tangier Island’s mayor for the past 14 years, never tires of telling the story. After all, getting a phone call from Donald Trump was one of the highlights of his life. In June 2017, a CNN crew visited the island and asked Eskridge if he had a message for Trump.

“I said, ‘Yes, tell him I love him like family,’” Eskridge recalls over lunch at Lorraine’s, a seafood restaurant near the town’s marina. Like nine in 10 of the island’s residents, Eskridge voted for Trump in the 2016 election. “There are very few Democrats on the island,” Eskridge says. “We allow them to live here.” 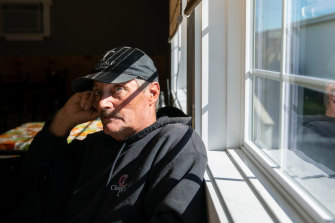 A few days after the CNN interview aired, Eskgridge, a lifelong waterman, was out crabbing when his son drove out in a boat to find him. “He said, ‘Dad you’ve got to get home, the President wants to talk to you.’ I said, ‘The President of what?’ I didn’t know if someone was joking with me.”

Trump and Eskridge spoke for around 10 minutes, bonding over their opposition to environmental red tape and scepticism about climate change. Eskridge says Trump assured him: “Tangier is not going anywhere.” The abundance of Trump 2024 flags already flying on the island suggest the former president remains as popular as ever here. “We were very disappointed,” Eskgridge says of Trump’s 2020 election defeat. “I know it’s controversial, but I’m not so sure he lost,” he adds, backing Trump’s unfounded claims of widespread election fraud.

Eskgridge, known universally on the island by his childhood nickname of Ooker, has a Jesus fish tattoo on one arm and a star of David on the other. Over the years he has named his pet cats after an array of famous conservative figures including right-wing pundit Ann Coulter and Supreme Court justice Samuel Alito. 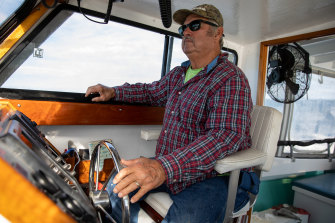 As a waitress brings out servings of soft shell crab sandwiches and fries smothered in crab dip, Eskgridge reflects on what makes Tangier such an unusual place. The isolation from the rest of society, he says, fosters a sense of community that has largely disappeared from modern America.

“My kids live on the mainland and don’t even know who their neighbours are. That’s so odd to me – to live by somebody for years and never talk to them. It’s a different world, a different world.”

Then there is another byproduct of Tangier’s remoteness: the language that islanders use among each other.

“This time of year, people say ‘Hawkins is coming’,” Eskridge says. To prove his point he yells out to a diner at a nearby table: “You know who Hawkins is, don’t you?”

“Oh yeah,” replies Mark Cockett, a local waterman and ferry operator. “We don’t want to see Hawkins just yet, we’re not ready for him.” 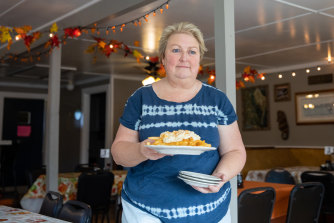 Jamie Parks brings a plate of “crabby fries” to a table at Lorraine’s Seafood Restaurant.Credit:Amanda Andrade-Rhoades

Eskridge explains that Hawkins, in the Tangier lexicon, means “cold weather and little or no money being made. I don’t know where it came from: my father said it and my grandfather used to say it.”

Other local phrases include to “have the mibs” (to smell), to be “dry as Peckard’s cow” (to be thirsty) and to be “selling cakes” (to have your fly down). Islanders also use what is known as “backwards talk” in which they say the opposite of what they actually mean. To describe a stranger as “ugly”, for example, is to say you think they are attractive.“We tone it down when we’re talking to folks from the mainland,” Eskridge says of the dialect.

After lunch he takes The Sydney Morning Herald and The Age on a golf-cart tour of the island and a boat ride to his yellow-and-lime green crab shanty. He says journalists from 40 countries have visited the island in recent years, but proudly notes this is his first time hosting a reporter from Australia.

Along the way Eskridge inspects his crab pots to see what has arrived overnight. He’s a man in his element, doing what he believes God put him on earth to do. Explaining why he never wants to live anywhere else, he says: “It’s the freedom we have here. Crabbing, working the water, you are your own boss, you make your own hours.”

Like the scientific experts, Eskridge believes his beloved island is in a fight for survival. “It’s disappearing,” he says of the place where he grew up, and his father, grandfather and great-grandfather before that. “We’ve lost five or six other smaller communities around Tangier that have gone underwater.” 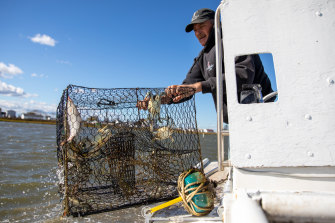 But he disagrees on the cause of the problem. Rather than rising tides caused by climate change, he says coastal erosion is to blame. “I’m not concerned about sea level rise,” he says. “If I see the sea level rising I will say so, but to me the sea looks the same as when I was a kid.”

He regards the debate about shifting from fossil fuels to renewables as a distraction from his mission to get as much of the island as possible protected by stone break walls. “Solar panels would be good for the island if we could pile them up on the shoreline and make a seawall out of them,” he quips.

You can’t live in marsh

David Schulte, a marine biologist with the Army Corps of Engineers who co-wrote the attention-grabbing 2015 on climate change’s impact on Tangier, insists a sea wall will not be enough to save the island.

“You can build a ring of stone around the edge of the island, but the problem is that sea levels are going to continue to rise and convert the high ground the town is sitting on into swamp and marsh,” he says. “And you really can’t live in marsh.”

For a forthcoming paper in the peer-reviewed journal Frontiers in Climate, Schulte found alarming declines in the height of Tangier’s three upland ridges. He says it’s an important contribution to the debate over sea level rise and erosion. “These ridges are not on the coast, so are not subject to coastal erosion. Any decline in their extent can be directly attributed to sea level rise.”

Even more worryingly, he found that sea level rise in the Chesapeake Bay is trending towards the higher-end of estimates, meaning the island could be uninhabitable within 20 to 25 years.

“In the next couple of decades a combination of sea level rise and erosion is going to drive them off the island unless significant action is taken. I don’t think there’s any way to save Tangier without a massive engineering undertaking.”

This would involve raising the height of the island ridges, temporarily relocating all residents and retrofitting the island’s plumbing and electricity systems – an expensive and laborious exercise. Given the island’s small and declining population, it’s a price American taxpayers may not be willing to pay. 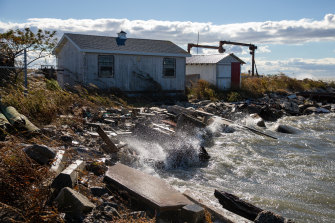 Waves break on the shoreline on Tangier Island.Credit:Amanda Andrade-Rhoades

Heartened by the attention the island has received in recent years, Eskridge is more optimistic. “I think we’ll get the help that we need in time, but it’s taking a while,” he says. The fight for Tangier’s survival is not one he can conceive of losing. “When we talk about saving the island, I’m not just talking about a piece of land. I’m talking about a culture and a way of life. We’ve been here for hundreds of years and we plan to be here for hundreds more.”

Get daily updates on the climate summit that will shape our future. Sign up to our COP26 newsletter here.