London: Britain's environment secretary acknowledged using cocaine on "several occasions" two decades ago, the latest politician hoping to become prime minister to reveal past drug use to circumvent negative headlines during what is expected to be a heated contest.

Environment Secretary Michael Gove, 51, told the Daily Mail that using cocaine was a mistake and "something I deeply regret," but he didn't think it should exclude him from office, the newspaper has reported. An upcoming biography of Gove includes the revelation of his drug use. 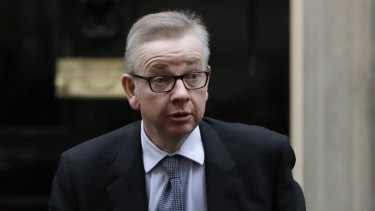 Britain’s Environment Secretary Michael Gove has admitted past drug use ahead of a new book.Credit:AP

Gove is just the latest Conservative Party candidate in the crowded race to replace Prime Minister Theresa May to go public with confessions about using illegal substances.

In recent days, Foreign Secretary Jeremy Hunt told The Times of London he drank a "cannabis lassi" in his youth while backpacking in India. International Development Secretary Rory Stewart told The Telegraph he smoked opium at a wedding in Iran 15 years ago.

May stepped down as party leader Friday, conceding she had failed in her attempt to withdraw the country from the European Union. She remains prime minister and is leading the government in a caretaker capacity until her successor is chosen.

So far, 11 lawmakers have announced they plan to seek the post of Conservative Party leader. The head of the party that won the most recent election typically serves as prime minister. Nominations for the Conservative's leader close Monday afternoon. 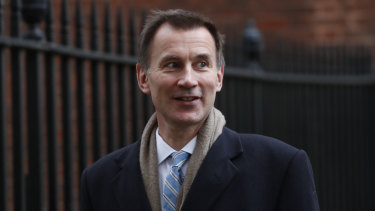 Foreign Secretary Jeremy Hunt says he drank a “cannabis lassi” in his youth.Credit:AP

As the Conservative leadership campaign heats up, it remains unclear how party members will receive the news.

The favorite on betting markets is Boris Johnson, a former foreign secretary and the head of the 2016 referendum campaign to leave the EU. Johnson told GQ in 2007 he had tried cocaine and cannabis.

"There was a period before university when I had quite a few [cannabis joints]," he said. "It was jolly nice. But apparently it is very different these days. Much stronger.

"I've become very illiberal about it. I don't want my kids to take drugs," Johnson added.

Johnson has pushed his claims for the leadership, saying only he can see off both Nigel Farage and Jeremy Corbyn.

Johnson said he would refuse to pay the promised £39 billion ($71 billion) to the European Union unless better Brexit terms are on offer – and would step up preparations to counter no-deal "disruption".

Meanwhile Gove set out plans to replace VAT after Brexit with a "lower, simpler" sales tax.

And Sajid Javid's campaign received a boost with an endorsement from Scottish Tory leader Ruth Davidson.

The issue of drug use has long been an issue in political campaigns. In 1992, US presidential hopeful Bill Clinton famously said he tried marijuana while at Oxford University but "didn't inhale."

The remark became the subject of derision, including by then-senator Barack Obama, who said in 2006: "When I was a kid, I inhaled. … That was the point."

Dominic Raab, another contender for party leader, previously admitted smoking cannabis as a student. He told the BBC he admired Gove's honesty.

"I'm not going to cast any further aspersions on Michael or anyone else who is just honest about being human and doing the things that some young people do – not everyone, obviously – and holding their hand up and saying 'I got that wrong,"' Raab said. "Move on."

After hearing pitches from all of the leadership contenders early next week, Conservative members of the House of Commons will vote by secret ballot on Thursday. Any candidates who fail to receive the backing of at least 5 per cent of the lawmakers will have to drop out. Further rounds will be held later in the month until only two contestants remain.

The Conservative Party's 160,000 dues-paying members will vote on the final two candidates to pick the next party leader, who will also become prime minister.