Three in 10 negative coronavirus tests may be WRONG: Doctors’ union warns inaccurate Covid-19 swabs could fuel the spread of the disease in hospitals

Three in 10 negative coronavirus tests may be wrong, which doctors fear could fuel the spread of the disease in hospitals.

The Hospital Consultants and Specialists Association (HCSA) says between two and three people who have Covid-19 may test negative.

This is dangerous because it means the patients may go outside and spread the virus to others, under the belief they are free of the infection.

Hospital staff incorrectly declared to be virus-free may even return to work and pass the infection on to vulnerable patients, the HCSA fears.

The HCSA, which represents thousands of frontline medics, said there is a ‘shroud of secrecy’ over how accurate the swab tests are.

Public Health England (PHE) has never disclosed how accurate its antigen testing is, despite publishing public papers on the accuracy of antibody tests.

Experts say false negatives will be a result of incorrect swabbing because there will be variances in how medics – and those taking a test at home – do it. 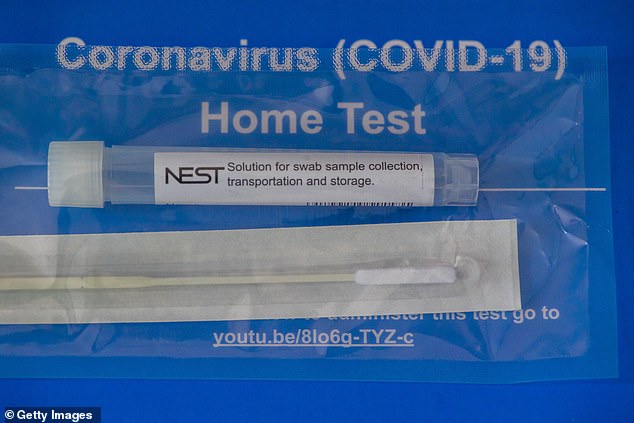 Three in 10 negative coronavirus tests may be wrong and fuelling the spread of the disease in hospitals, a doctors’ union has warned. Pictured: A home testing kit from PHE 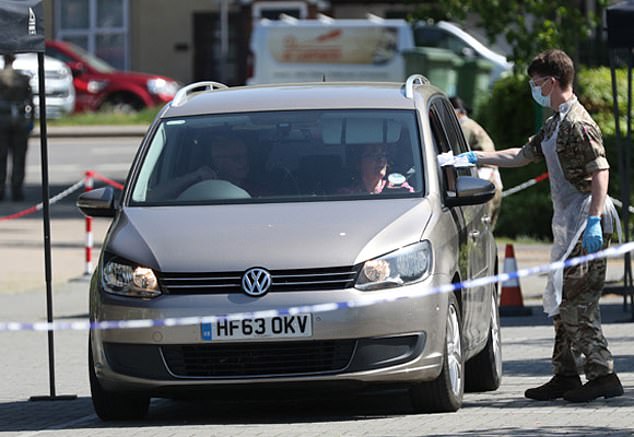 The Hospital Consultants and Specialists Association (HCSA) says between two and three people who are positive for the virus test negative. Pictured: A drive through test facility in England

In a letter to Duncan Selbie, the chief executive of PHE, Dr Paul Donaldson, general secretary of the HCSA, expressed his ‘deep concern and frustration’ at the ‘systematic lack of information’ over the reliability its tests.

He said: ‘A wall of silence seems to have been erected around the issue, with only the occasional claim or hint emerging regarding the testing regime.

‘Separately, statements by PHE officials and others place the incidence of false negatives somewhere between 20 and 30 per cent.

‘If confirmed, this is a worryingly high rate that raises the prospect of many infected individuals, possibly without symptoms, being passed fit to return to healthcare settings where they will transmit Sars-CoV-2 to colleagues and patients.

‘If the chance of false negative results is as high as reported then in our view, without repeat PCR testing to confirm a negative result, staff should not be told to return to a clinical setting where they would risk passing SARS-CoV-2 to vulnerable patients and fellow staff.

‘This could become a particularly acute issue as the NHS plans to significantly increase its non-Covid work and wider lockdown measures are eased.’

Prime Minister Boris Johnson has warned hospital acquired COVID-19 has caused an ‘epidemic’ of deaths during the pandemic.

NHS bosses say up to a fifth of Covid-19 patients in several hospitals have contracted the disease while already being treated there for another illness.

Dr Donaldson demanded an end to the ‘wall of silence’ on testing accuracy from PHE and called for transparency about whether the tests were ‘inadequate’.

He added it was ‘striking’ PHE has publicly published information on the accuracy of antibody tests – but had not done the same for swab tests it has used for months.

Dr Donaldson has made a number of attempts, including writing to Mr Selbie directly a month ago, to answer ‘a series of pertinent questions’ about the testing regime.

‘The different tests in use have been assessed as performing to manufacturers’ specifications.’ 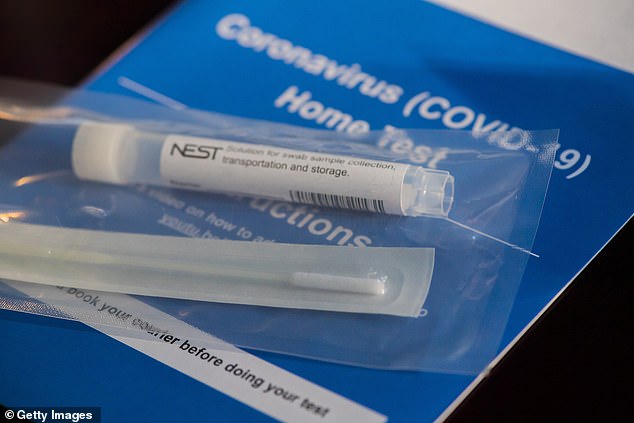 Nose and throat swabs are considered an acceptable way to take a sample. PHE provides instructions for the 40,000 or so people who are sent home kits every day in the UK (pictured). The accuracy of viral RNA swabs depends almost entirely on the quality of sampling

Home testing kits tell people to take two swabs; one from the nostril and another of the back of the throat through the mouth 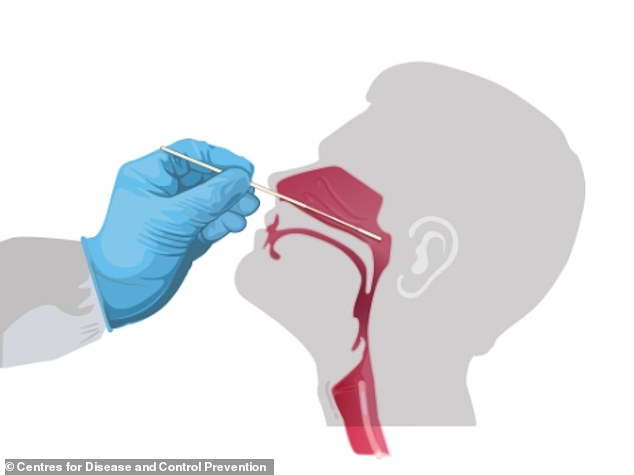 Nasopharyngeal swabs are the preferred choice of testing for SARS-CoV-2 worldwide because it collects the most concentrated sample. A long flexible cotton bud is supposed to be inserted deep into the nostril and along the nose ‘floor’ to collect a mucus sample

WHAT IS THE SWAB TEST FOR CORONAVIRUS?

Nasopharyngeal swabs are used to detect respiratory viruses, such as the flu and the new coronavirus.

It is the preferred choice for SARS-CoV-2 testing, according to the Centers for Disease Control and Prevention (CDC).

It involves inserting a long, flexible cotton bud into the nostril and along the nose ‘floor’. This is supposed to be done slowly so that it is comfortable.

The aim is to reach the posterior nasopharynx, a cavity made up of muscle and connective tissue, covered in cells and mucous that are similar to the nose. It continues down into the throat.

The swab is rotated several times in order to get enough cells.

The sample is then sent to a lab, where it will be tested to determine if the patient’s cells are infected with the virus.

The coronavirus is a RNA virus, which means it uses ribonucleic acid as its genetic material. A process called reverse transcription is needed to transcribe the RNA into readable DNA.

A swab sample doesn’t collect much RNA in one go, therefore a polymerase chain reaction (PCR) is used to rapidly make billions of copies so it can be analysed.

The DNA is dyed a fluorescent colour, which glows if the coronavirus is present, confirming a diagnosis.

A statement given to MailOnline on the matter previously, from Yvonne Doyle, Medical Director at PHE, said: ‘The UK testing system is built on strong foundations using the latest evidence and expert advice.

‘There are many studies currently ongoing into the accuracy of the COVID-19 test and a number of different methods are available to assess this. However, there is no such thing as a perfect test.

‘We have made every effort to make testing as strong as possible in line with our high standards.’

Test results are key to understanding how the outbreak is unraveling. But they are only part of the picture because tests have been inaccessible to almost everyone other than hospital patients, key workers until very recently.

PHE uses polymerase chain reaction (PCR) tests, which are a form of antigen tests conducted to see if someone has the virus, SARS-CoV-2, at any given time.

These viral RNA tests use samples taken from a suspected patient’s throat, mouth or nose with a swab.

The accuracy of viral RNA swabs depends almost entirely on the quality of sampling and when the sample is taken in the course of disease, which will vary greatly, experts say.

Research by the University of Bristol found between two per cent and 29 per cent of COVID-19 tests produced false negatives.

The number of ‘true positive’ results from swabs taken from the nose was as low as 63 per cent, and 32 per cent taken from the throat, the researchers wrote in the British Medical Journal.

The pre-print paper by Public Health Madrid, in Spain, urged to repeated testing to check results are correct.

One study showed nasal swabs correctly identified 73 per cent of severe Covid-19 cases and 72 per cent of mild cases in the first week of symptoms.

When throat swabs were collected eight days after symptoms, the rate dropped to 50 per cent in severe and 30 per cent in mild cases.

Eight days may seem like a long wait for a test. But in the UK, accessing swab tests has shown to be challenging.

Home test kits and slots at facilities have sold out within minutes online, leaving many waiting days to get tested for Covid-19.

PHE provides instructions for the 40,000 or so people who are sent home kits every day in the UK.

The preferred way – and most accurate, doctors say – is for trained medics to take a nasopharyngeal swab because it collects the most concentrated sample.

A long flexible cotton bud is supposed to be inserted deep into the nostril and along the nose ‘floor’ to collect a mucus sample.

The aim is to reach the posterior nasopharynx, a cavity made up of muscle and connective tissue, covered in cells and mucous. It continues down into the throat.

But the test is so uncomfortable it’s been described like ‘being stabbed in the brain’. It can cause people to gag and suffer nosebleeds.

Photos of drive through centres show healthcare workers opting for the less invasive option of a nose or throat sample.

Lawrence Young, a virologist and infectious disease expert at Warwick University who has previously warned false negatives are in the region of 30 per cent, told MailOnline: ‘False negatives are for several reasons, but probably the main reason is a sampling error.

‘It’s always concerned me and many colleagues there is an issue with swabbing and I think some errors will creep in.

‘I think that the doctor’s union letter is fair. There’s a lot of concern about the accuracy of the test and how numbers of tests per day are being counted. The drive to an arbitrary target (e.g. 100,00 tests per day) has been a major distraction.’

Professor Young said saliva tests, whereby a patient spits into a tube, are being evaluated as more accurate alternatives.