Washington: Senior Republican politicians have sought to blame failing wind turbines for the massive blackouts in Texas that have left millions of people without power for days in freezing temperatures.

The state’s electric grid operator, the Electric Reliability Council of Texas (ERCOT), has said that renewable energy sources partially failed but that thermal sources such as coal, gas and nuclear energy lost almost twice as much power during the snowstorm. 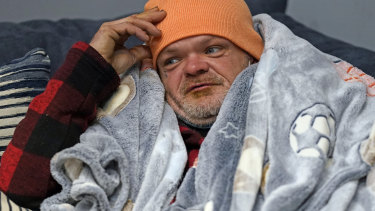 Brett Saint rests inside a Gallery Furniture store which opened as a shelter for those in need of food, water and heat in Houston. Credit:AP

As of Thursday (AEDT) morning, 3.4 million people were still without power in Texas as temperatures remained as low as minus four degrees celsius in cities such as Dallas. Such low temperatures are extremely rare in the southern state, which has a population of almost 30 million.

A woman and an 8-year-old girl in Houston died of carbon monoxide poisoning after a car was left running in a garage to help generate heat, according to Houston police.

“This shows how the Green New Deal would be a deadly deal for the United States of America,” Texas Governor Greg Abbott said in an interview with Fox News host Sean Hannity, referring to the ambitious clean power plan championed by New York Congresswoman Alexandria Ocasio Cortez.

“Our wind and our solar got shut down, and they were collectively more than 10 percent of our power grid, and that thrust Texas into a situation where it was lacking power on a statewide basis…It just shows that fossil fuel is necessary.” 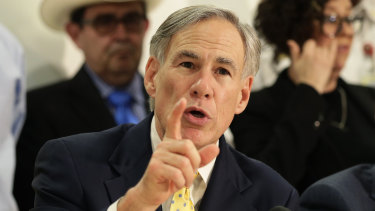 The fall-out in Texas echoes the heated debate over wind energy following the South Australian blackouts in 2016.

The electricity shortfall caused prices to spike in Texas, raising questions about the operations of the state’s grid. Abbott, who described ERCOT’s performance during the freeze as a “total failure”, demanded that state legislators investigate the body and pass reforms. 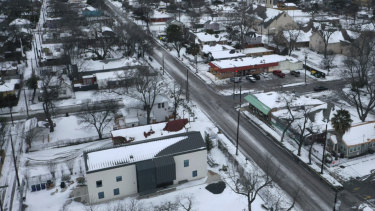 Snow and ice grips a neighbourhood in Austin. Day six of the statewide freeze and still millions of Texans are without power. Credit:AP

Republican congressman Dan Crenshaw tweeted: “Bottom line: Thank God for baseload energy made up of fossil fuels. Had our grid been more reliant on the wind turbines that froze, the outages would have been much worse.”

Ocasio Cortez said on Twitter: “The infrastructure failures in Texas are quite literally what happens when you *don’t* pursue a Green New Deal.”

She then said that Abbott “needs to get off TV pointing fingers & start helping people”.

“After that, he needs to read a book on his own state’s energy supply,” she said.

The Green New Deal – a non-binding resolution that has not passed Congress – calls for a “10-year mobilisation” to dramatically reduce carbon emissions in the US.

“It appears that a lot of the generation that has gone offline today has been primarily due to issues on the natural gas system,” Dan Woodfin, a senior director at the council, said on a call with reporters.

“Whether it’s wildfires in California or snowstorms in Texas, we need to upgrade our grid infrastructure ASAP.”