Robinson was caught on video smashing the England fan in the head ahead of the Three Lions 3-1 defeat to the Netherlands in Porto.

Footage shows convicted footie thug Robinson sharing words with the man, before he thumps – warning him he will get “knocked out”.

The EDL founder – real name Stephen Yaxley Lennon – has defended his actions saying his victim was “getting rowdy in my face”.

His victim has now giving his side, identifying himself simply as a charity worker, 35.

He claims he told Tommy “you don’t represent me” and alleged the failed MEP hit him from behind.

“I was walking away from Tommy when he made a beeline for me and punched me from behind, in the side of the head,” the fan told the Mirror.

“I’m not the fighting kind and it seemed such cowardly behaviour.”

The Three Lion fan said Robinson has now proved “yet again” he is the “thug he tries to pretend he isn’t”.

He claimed he started talking to Robinson when he noticed the EDL founder taking selfies with fans. 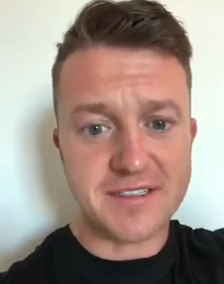 “It was a passing comment, but I’d have been up for a debate if he had wanted to chat – I guess he didn’t,” he said.

He added he also said: “I didn’t think fascists were allowed at the match.”

He claims Robinson headed over to him and his friend aggressively asking: “What did you say?”

And the fan said he repeated himself, and then Robinson threw his drink over him. 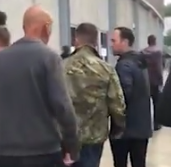 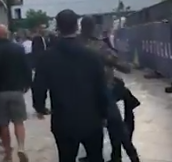 The supporters then said he quipped back as he was walking away, “thanks for that, mate. If I had a milkshake I’d throw it at you”.

He wrote it off as “banter that escalated” and then he felt a punch to the side of his head from behind.

Left with a cut and swollen mouth, the supporter doesn’t want to be named for fear of hassle from Robinson’s supporters.

He admitted he and his friend had a few pints before the match but was adamant Robinson was the aggressor.

However, he said he is not planning to take the complaint to the police. 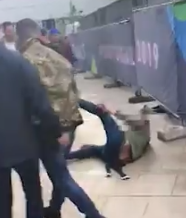 Robinson was convicted of football hooliganism in 2011, having led 100 Luton fans in a clash with Newport County supporters in 2010.

In a video responding the the incident, Robinson claimed he was with his wife – but no women are seen in the clip.

He said: “I said to the man’s friends ‘keep that man away from me’. He comes back up to me again like that… and watch what happens.

“If people are getting physical, I am not going to wait for them to attack me… the man needs to keep his views to himself, his mouth to him.” 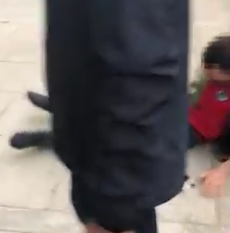 Deputy Chief Constable Mark Roberts, of the National Police Chiefs’ Council, said the footage from Guimaraes has been passed to counterparts in Portugal for investigation.

He added: “Anyone found to be involved in disorder could be subject to a banning order on their return to the UK.”

Robinson ran as an MEP last month in the North West, but achieved just 2.24% of the vote – costing him his £5,000 deposit and finishing eighth out of 11.