Reports show Kim Yong-chol, who led February nuclear talks with US, clapping with the North Korean leader at a concert. 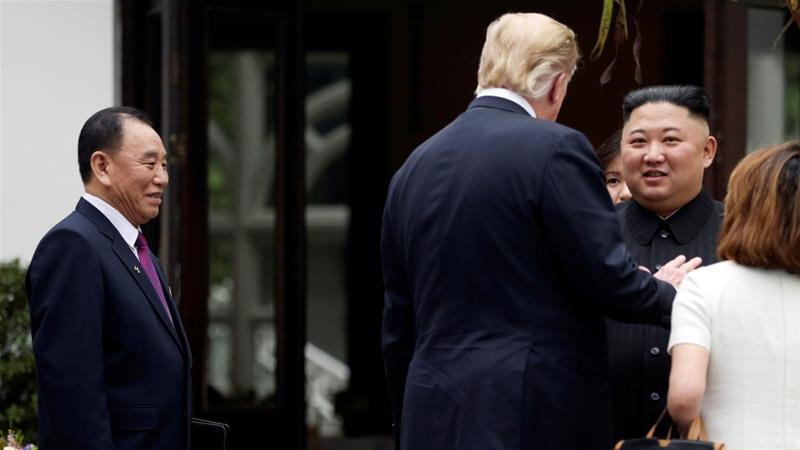 A senior North Korean official who had been reported as purged over February’s failed nuclear summit with Washington was shown by the state media enjoying a concert near the country’s leader Kim Jong Un.

North Korean publications on Monday showed Kim Yong-chol, the leader’s right-hand man who led the talks at the nuclear summit, sitting five seats away from a clapping Kim in the same row along with other top officials during a musical performance by the wives of Korean People’s Army officers.

Official news agency KCNA named Kim Yong-chol as the 10th person among a group of 12 “leading officials” who accompanied Kim and his wife, Ri Sol Ju, to Sunday’s show.

The appearance followed conflicting reports of shakeups in the team that led engagement with the United States last year, only for nuclear talks to collapse after Kim and US President Donald Trump failed to reach a pact in February.

On Friday, South Korean newspaper Chosun Ilbo had reported Kim Yong-chol, a counterpart of US Secretary of State Mike Pompeo until the failed summit, had been sent to a labour and re-education camp, citing an unidentified North Korean source.

The Chosun Ilbo report, which Al Jazeera was unable to confirm independently, also said North Korea executed its working-level nuclear envoy to the US, Kim Hyok Chol, along with other four officials.

South Korea’s government and media have a mixed record on tracking developments among North Korea’s ruling elite, made difficult by Pyongyang’s stringent control of information about them.

Asked on Sunday about the last US contact with Kim Yong-chol and North Korea in general, Pompeo declined to answer, saying, “We conduct our negotiations in private.”

About reports of a “shake-up” of Kim’s negotiating team in a May 5 interview with Australia’s ABC News, Pompeo said it did appear that his future counterpart would be somebody else, adding: “But we don’t know that for sure.”

He said, “Just as President Trump gets to decide who his negotiators will be, Chairman Kim will get to make his own decisions who he asks to have these discussions.”

In April, an official photograph from a session of North Korea’s rubber-stamp legislature showed Kim Yong-chol standing behind Kim Jong Un, but he did not accompany him on his summit with Russian President Vladimir Putin later that month.

The reports on the fate of Kim Yong-chol come at a delicate time for diplomacy as North Korea in past weeks has tested short-range missiles and issued belligerent rhetoric towards American and South Korean officials.

Kim declared in April that the Trump administration has until the end of the year to come up with mutually acceptable terms for a deal to salvage the negotiations.