Home » World News » Train delayed by swans on the line

Cygnet failure! Train is delayed by 30 minutes when it has to crawl along the track behind a family of waddling swans

This is the amusing moment a bevy of swans held up a train for 30 minutes – by refusing to budge from the track.

The two adults and two cygnets were waddling along the line when a train came up behind them near a level crossing at Stowbridge in Norfolk.

But they were completely unfazed and forced the train to slow to a snail’s pace as they continued to stroll along at 3.30pm on Tuesday. 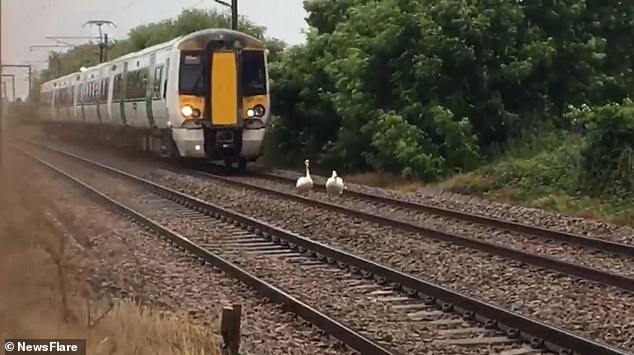 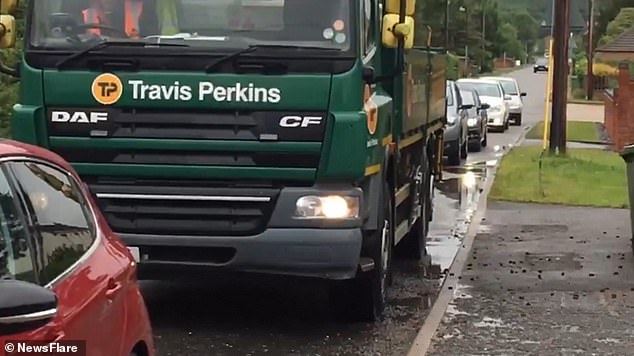 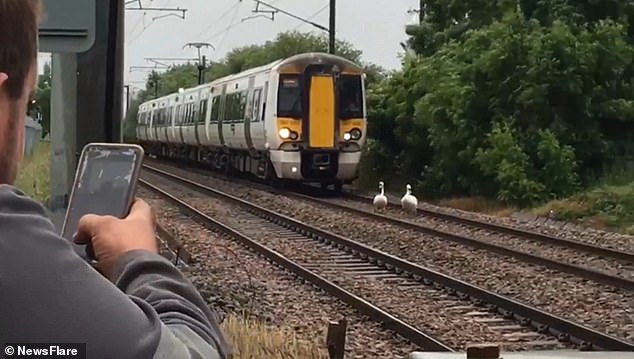 The service, travelling between Downham Market and Watlington, was delayed for half-and-hour while the swans were chased back to the nearby River Great Ouse.

Paul McCaffrey, 40, said the adults birds ‘stood as tall as a man’ while they faced off with people trying to shoo them on.

He said: ‘I was walking to the local pub and I looked down the track about 200ft and watched these two swans just standing in front of this train.

‘They had two cygnets with them and didn’t have a care in the world about standing in front of this train.

‘After about 15 minutes the driver got out of his cab but I think he was a bit scared because he got out their green umbrella and was trying to shoo it away from about six feet away.

‘He wasn’t having much luck.’

Paul said the driver got back in and when the birds started to waddle down the line, he drove behind them slowly, until the birds reached a growing crowd of onlookers.

The crowd, including Mr McCaffrey, helped shoo the birds off the tracks, before they were rescued by the RSPCA.

A Govia Thameslink Rail (GTR) spokesman said: ‘We received a report of swans on the line between Downham Market and Watlington just after 15:30 yesterday.

‘A King’s Cross to King’s Lynn service was delayed by about half an hour as a result.’