Tri harder! Cocky triathlete is pipped to the finish line after showing off with a daft celebration as rival dashes past

An athlete missed out on a triathlon victory after he stopped to celebrate yards before the finish line and was overtaken by a rival.

Mateo Bustos thought he had romped home at the event in Sagunto in Spain’s eastern Valencia Province on Sunday, only for him to be pipped on the home straight.

The triathlete saw nothing between himself and the finishing line, so he decided to slow down and do a fist pump while facing the crowd. 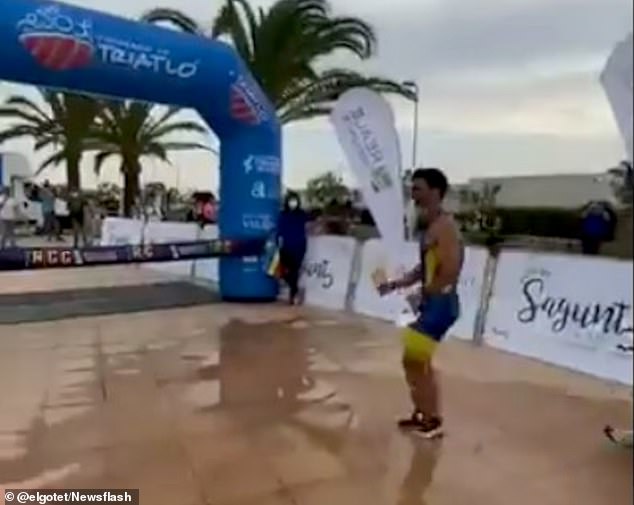 However, a determined runner on his tail whom he had failed to notice starts sprinting and overtakes him just metres before the finishing line.

An incredulous Bustos can then be seen putting his head in his hands as a female spectator shouts: ‘Idiot! How can he be so stupid?’

The same woman can then be heard saying: ‘No way! How can he do such a thing? I told him ‘run or he’ll catch you up’.’

As a result of his actions, the athlete from Club Multiesport Benitatxell was pipped to the post by German Cister of Club Triatlon TriCanet.

The footage quickly went viral, racking up tens of thousands of views on social media and attracting comments like: ‘It’s as if Cristiano celebrated the goal before scoring.’

Other netizens, however, accused Cister of a lack of sportsmanship, suggesting he should have let his compatriot win the race.