Washington: No friendship lasts forever. And neither do trees.

An oak tree planted last year by French President Emmanuel Macron and US President Donald Trump to symbolise 100 years of French and American friendship has died. 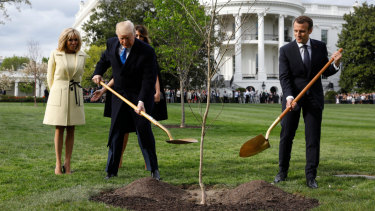 US President Donald Trump and French President Emmanuel Macron planted the tree on the south lawn of the White House on April 23, 2018. Credit:Alamy

A year ago, the two leaders took part in a ceremony in Washington, where they took turns shovelling dirt on top of the sapling. "This oak tree…will be a reminder at the White House of these ties that bind us," wrote Macron at the time on Twitter.

Even the tree itself was symbolic – the sapling was harvested from Belleau Wood, the French site of one of the bloodiest battles in World War I for American forces.

The tree was removed by American authorities a few days after it was planted to be placed in quarantine like any other agricultural import to the United States.

US officials last weekend said it had died prompting a flurry of social media posts comparing its death to the difficult relationship the two leaders have had since that visit.

Macron downplayed the tree's death on Tuesday, saying people shouldn't read symbols into everything and that he would send the American leader a new tree.

"We will send him another, it is not a tragedy," Macron told Switzerland's RTS network on the sidelines of an International Labour Organisation meeting in Geneva. "Do not see symbols where there are none, the symbol was to plant it together".

Gerard Araud, the French ambassador to the United States, took to Twitter to reassure people that the tree "will be replanted afterwards."

The relationship between the two countries has been strained by tensions over the climate change, Iran nuclear policy, international security commitments and the resurgence of nationalist forces in Europe.