The infamous “Trump Baby” blimp was seen flying across London on Tuesday as protesters turned out in the thousands during the U.S. president’s state visit. 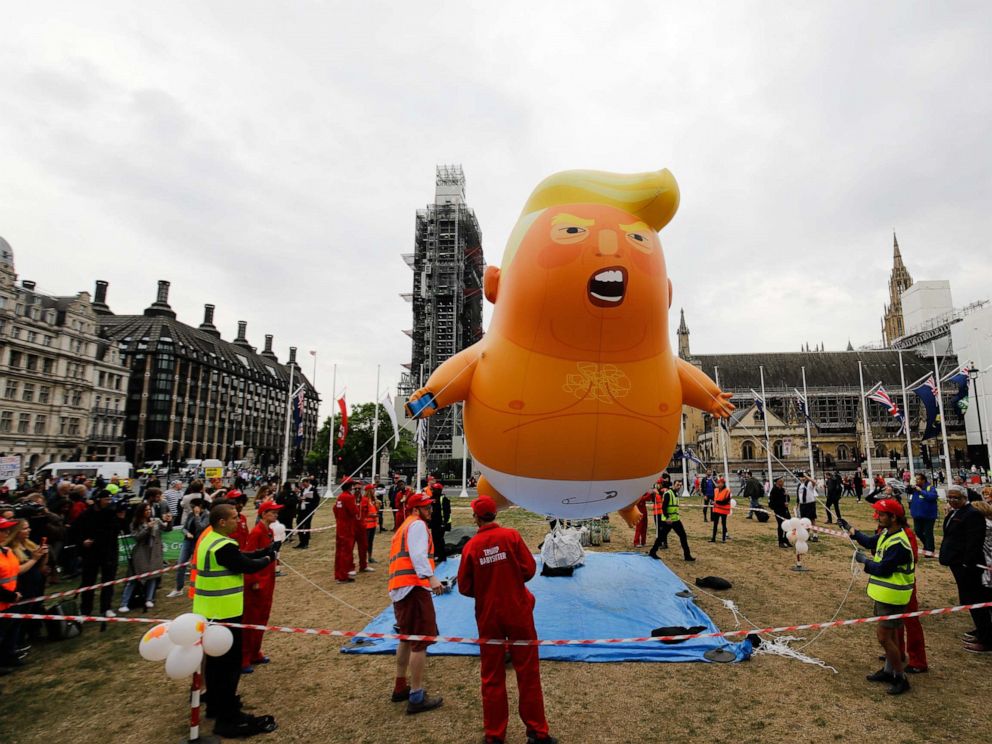 The “Trump Baby” blimp, a giant balloon that depicts the president in diapers holding an iPhone, will serve as the focal point of the protests just a year after it dominated headlines during the president’s last visit to the U.K.

A spokesperson from “Together Against Trump” told ABC News that the group expects protests to take place throughout the country, but that the event in Trafalgar Square is the main event.

A number of Facebook groups, including the “Stop Trump Coalition” and “Stand up to Trump,” have organized protests against his state visit so that the “world will know that people here reject him and his toxic politics.”

“On 4 June thousands of protesters will be marching to surround Trump as he joins Theresa May on a visit most believe should never have happened,” a spokesperson for “Stand up to Trump” told ABC News. “We will be bringing central London to a standstill. By the time he leaves he will know, and the world will know, that people here reject him and his toxic politics.”

Socialist Jeremy Corbyn, leader of the Labour Party, the U.K.’s second largest, is scheduled to speak to protesters in London today. In an interview with the Sunday Times last week, Trump warned that Corbyn, who could be the next prime minister, is “making a mistake” if he refuses to treat the United States as an ally.

Corbyn said that the protests of Trump were an opportunity to “stand in solidarity with those he’s attacked in America, around the world and in our own country” on Twitter.

Corbyn also referenced Trump’s criticism of London Mayor Sadiq Khan, whom the President described as a “loser” just before arriving in the U.K.

“@SadiqKhan, who by all accounts has done a terrible job as Mayor of London, has been foolishly “nasty” to the visiting President of the United States, by far the most important ally of the United Kingdom,” the President said in a tweet Monday. “He is a stone cold loser who should focus on crime in London, not me.”

Trump was responding to criticism from Khan in an article for the Observer, in which the mayor said that it was “un-British to roll out the red carpet for Donald Trump.”

London’s Metropolitan Police said they would be undertaking a “multi-faceted security operation” to deal with the protests, which are expected to be peaceful.

“Protestors will not be marching past Downing Street at any point,” the police said in a statement. “This is a multi-faceted security operation, and whilst the Met has a responsibility to ensure the right to peaceful protest, this needs to be balanced with the complex requirements of this policing plan.”

“We are anticipating a number of additional protests to take place across central London” during Trump’s visit, police added.