Washington: If Donald Trump believes, deep down, that he has any realistic prospect of serving another four years in the White House, he didn't act like it when he fronted the cameras on Saturday (AEDT).

Trump’s muted appearance in the Rose Garden was the first time he had addressed the nation in eight days. 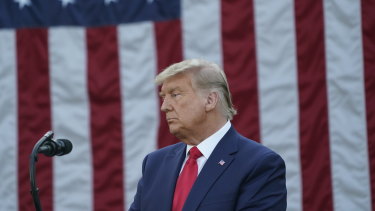 Trump’s appearance in the Rose Garden was the first time he had addressed the nation in eight days. Credit:Polaris

When Trump last spoke, his claims of widespread election fraud and corruption were so inflammatory and inaccurate that most US media networks — including Fox News — rapidly cut away from his speech.

Since then, he had only appeared publicly to play golf and lay a wreath at a Veterans' Day commemoration.

A President who has been virtually omnipresent on television for four years appeared to have gone into hiding, content to communicate with the outside world solely via Twitter.

The Trump who emerged in the Rose Garden was, by his standards, noticeably subdued.

Trump didn't talk about the election at all, except for a moment where he appeared to be on the verge of acknowledging an incoming Biden administration. But he caught himself at the last moment, saying only: "Whatever happens in the future, who knows which administration it will be. I guess time will tell."

Such a fatalistic tone is not what you'd expect from someone who genuinely believed the election had been stolen from him, or who thought he had a real shot at reversing the outcome.

Trump, who relishes ad-libbing, largely stuck to his script about the development of a coronavirus vaccine. He left without taking any questions from reporters, a departure for a man who delights in sparring with the members of the "fake news".

The reason for holding the press conference appeared to be two-fold. Firstly, to show the public that Trump is still fulfilling his presidential duties. And secondly, to claim credit for the eventual rollout of a COVID-19 vaccine.

This claim is complicated somewhat by the fact that Pfizer — which announced positive results from its COVID-19 vaccine trials earlier this week — did not take any money from the US government to research or develop its vaccine. It has signed a deal to sell the vaccine to the government in bulk if it is shown to be effective.

Trump took shots at Pfizer for dissociating itself with his administration and New York Governor Andrew Cuomo for criticising his vaccine strategy. But it felt pretty half-hearted.

Even on the most optimistic timeline, it will be a Biden administration that oversees the mass distribution of a vaccine early next year. Trump wants to be the one who gets the kudos for the vaccine and any subsequent economic recovery — a boast that would come in handy if he decided to run for president again in 2024.

When it came to the election just gone, Trump didn't concede defeat on Saturday but didn't put up a fight either. Rather than someone playing to win, he looked like he was going through the motions – and running down the clock.

Understand the election result and its aftermath with expert analysis from US correspondent Matthew Knott. Sign up to The Sydney Morning Herald‘s newsletter here, The Age‘s here, Brisbane Times‘ here and WAtoday‘s here.