MAGA turns on Mitch: Trump says ‘people are angry’ after allies including Michael Flynn slammed the GOP Senate majority leader for ‘caving to the mob and China’ by recognizing Biden as president-elect

Early on Wednesday, Trump tweeted this DailyMail.com article, writing: ‘Mitch, 75,000,000 VOTES, a record for a sitting President (by a lot). Too soon to give up. Republican Party must finally learn to fight. People are angry!’

Incoming Congresswoman Marjorie Taylor Greene, a Georgia Republican, was among the MAGA supporters who blasted McConnell over his remarks. 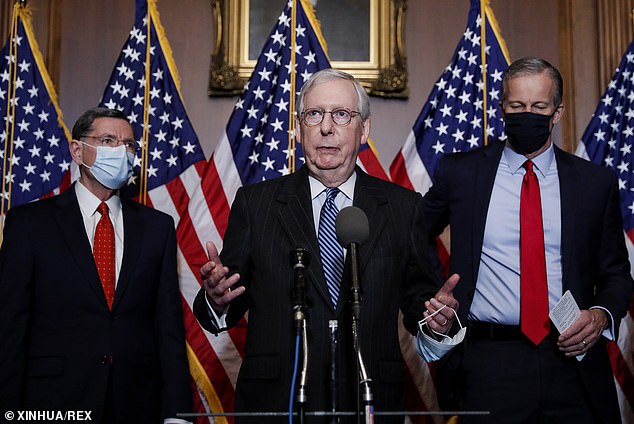 ‘The Electoral College has spoken,’ McConnell said on Tuesday morning, before adding he wanted to ‘congratulate the President-elect Joe Biden’ 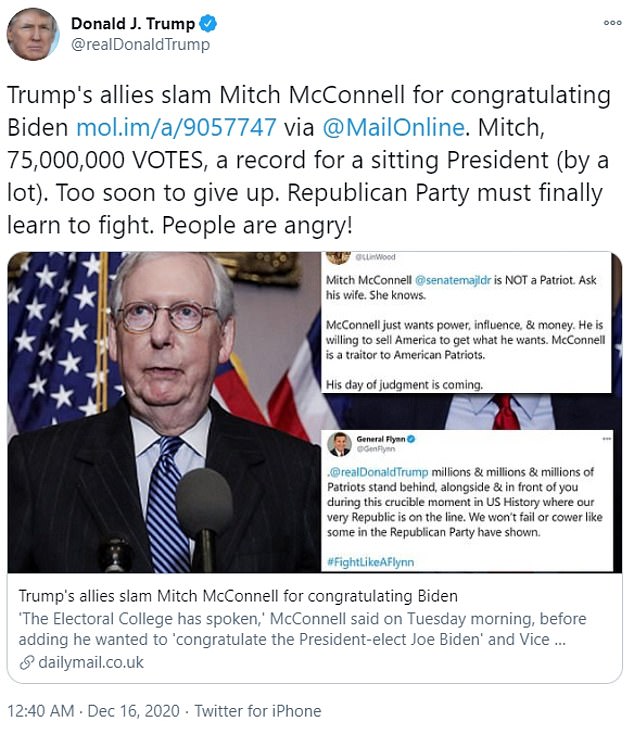 Trump tweeted this DailyMail.com article, writing: ‘Mitch, 75,000,000 VOTES, a record for a sitting President (by a lot). Too soon to give up. Republican Party must finally learn to fight. People are angry!’ 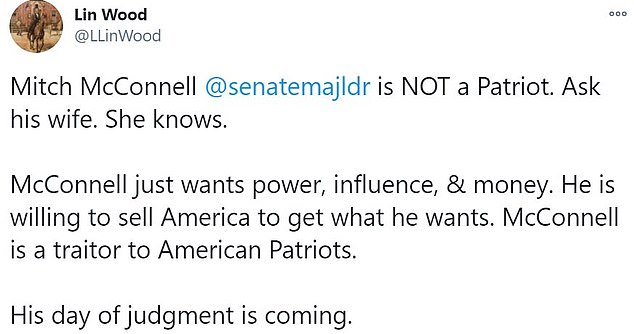 Trump campaign attorney Lin Wood went even further, calling McConnell a ‘traitor’ and vowing: ‘His day of judgment is coming.’

McConnell ‘is NOT a Patriot. Ask his wife. She knows,’ wrote Wood, referring to Transportation Secretary Elaine Chao, McConnell’s wife of 27 years.

‘McConnell just wants power, influence, & money. He is willing to sell America to get what he wants. McConnell is a traitor to American Patriots,’ Wood continued.

Flynn told Trump: ‘millions & millions & millions of Patriots stand behind, alongside & in front of you during this crucible moment in US History where our very Republic is on the line. We won’t fail or cower like some in the Republican Party have shown.’

Sebastian Gorka, a conservative radio host who served briefly in the Trump administration, accused McConnell of caving to ‘the mob’ by conceding the election to Biden before the final January 6 count of the Electoral College in Congress.

‘Trump helped you secure your seat, as he did so man Senate and House seats, and you couldn’t even wait until January 6th,’ added Levin. ‘You’ve been the GOP ‘leader’ in the Senate for far too long. It’s time for some fresh thinking and new blood.’

Hard-right commentator Nicholas J. Fuentes, who has been leading ‘Stop the Steal’ rallies across the country, tweeted simply: ‘McConnell is a traitor and a RINO.’

The acronym ‘RINO’ stands for ‘Republican in name only.’

On Tuesday, McConnell warned his fellow GOP senators not to join Trump’s continued attempts to overturn the Electoral College results.

In private discussion, McConnell reportedly warned Republican senators away from disputing the Electoral College tally when Congress convenes in a joint session January 6 to confirm the results. 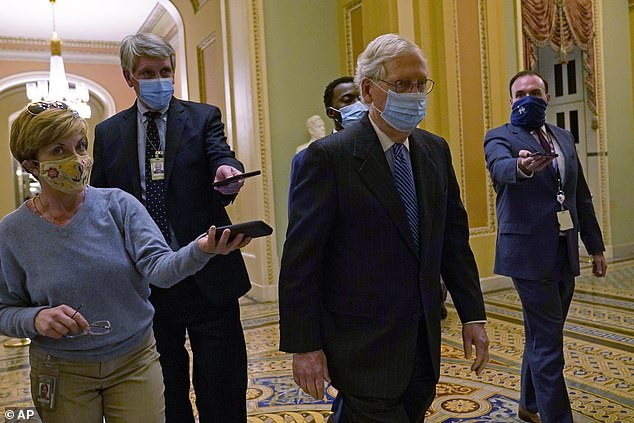 On Tuesday, McConnell warned his fellow GOP senators not to join Trump’s continued attempts to overturn the Electoral College results

That fight would yield a ‘terrible vote’ for Republicans, McConnell told the senators, according to two people granted anonymity to discuss the call, which was first reported by Politico. They would have to choose whether to back Trump or publicly buck him.

Republicans are worried about bad effects on the Georgia runoff election, where two incumbent Republican senators, David Perdue and Kelly Loeffler, face Democratic challengers Jon Ossoff and Raphael Warnock in a state that flipped in November for Biden.

McConnell has been a strong supporter of most Trump efforts. But the turn of events six weeks after Election Day showed the Kentucky senator, backed by his leadership team, seeking to normalize relations with the coming Biden presidency while avoiding the spectacle of pitched floor fight that would divide the party as Trump reluctantly leaves office.