Heavy snow has blanketed parts of Britain in recent days, accompanied by icy temperatures and grey skies. Now more cold weather is on the way, with even more snow and “harsh frosts” wreaking havoc for the first week of January according to forecasters. Temperature maps for the next week have turned purple demonstrating the icy plunge over the next few days.

New Year’s Eve was a saw the coldest minimum temperature of the year at -7.5C at Topcliffe.

Up to seven inches of snow was recorded at Loch Glascarnoch, Scotland’s deepest snow depth of 2020.

Now Netweather forecasters predict the weekend will start off dry with sunny spells, however, “wintry showers will be about from the off nearer to the coasts.”

As Saturday afternoon begins, “it looks likely that the wintry showers may organise themselves and push further inland from the east”. 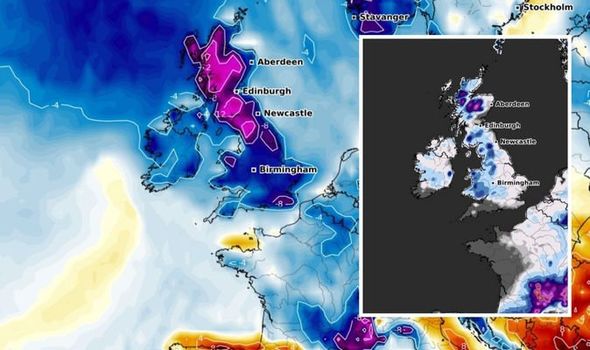 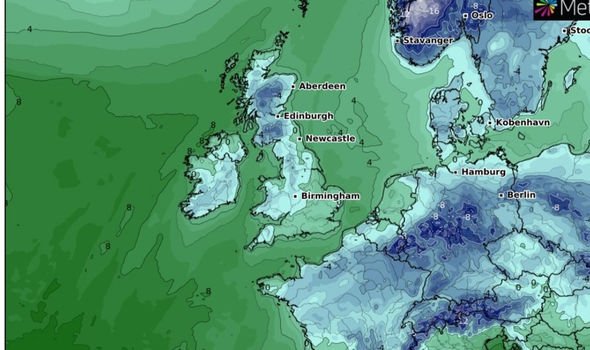 These wintry showers could potentially track right across England and even into Wales, however, there is some uncertainty over this.

Overnight into Sunday, there will be a “hard frost” especially for “the north and west”.

Sunday will be a very similar day with wintry showers most frequent in eastern coastal counties but coming further inland at times. 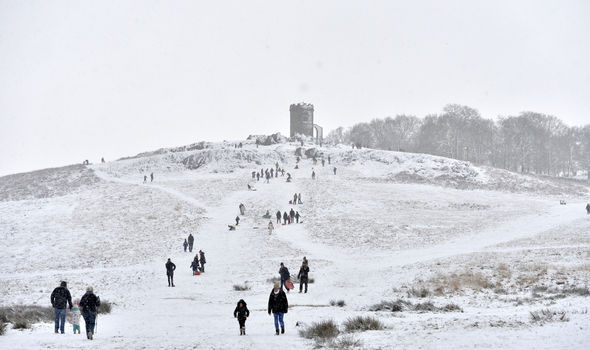 He said: “Obviously it’s very cold and it’s going to stay cold through this week.”

“Whilst there will be some wintry hazards around, it’s not really until the end of the week until we see any significant snow.

“Tonight we’ll see temperatures dropping again and that will bring a fairly significant risk of ice patches, particularly in northern parts of Scotland.

“I expect it won’t take very long at all for the risk of icy patches to start forming an hour or so after sunset.”

Snow maps from WXCharts and Netweather show thick snow showers across the country throughout the first week of January.

WXCharts maps show particularly heavy snow over Scotland and the North of England towards the end of next week.

Temperature maps also show icy conditions, with the mercury dipping to -4C on Wednesday, January 6 and turning purple with the cold.

Netweather charts also show heavy snow tracking across the UK, coming from the east and covering much of England, Wales and Scotland. 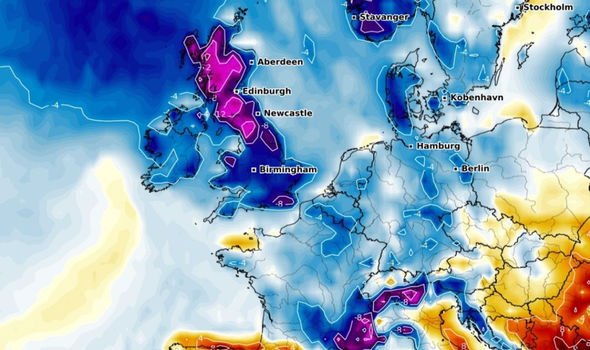 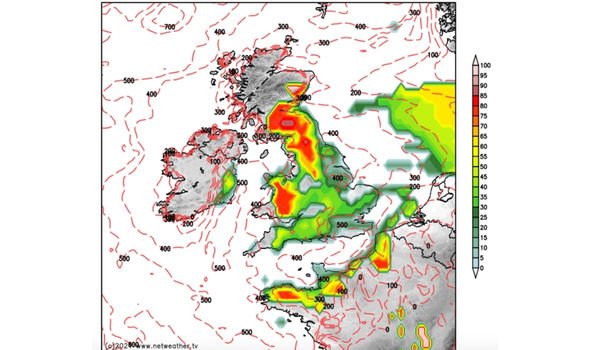 This Evening and Tonight

Staying rather cloudy over southeast England and East Anglia.

Elsewhere clear spells along with frost and patchy ice forming.

Variable cloud and wintry showers, these most frequent in the north and east.

Best of any sunshine in the west. Some patchy rain or sleet affecting the Midlands later. Cold.

Outlook for Sunday to Tuesday

Wintry showers across the east and rain in parts of the south. Far north mainly dry.

Severe overnight frosts in parts of the northwest. Strong winds developing in the south.