A cold front is forecast to push northerly winds towards eastern and southern parts of the UK over the next few days, potentially bringing wintry showers with them. Charts from Weather Outlook show blue swirls of cold air hitting parts of the UK on Wednesday, as temperatures are shown to plunge to a bitterly cold -5C in Nottingham, Cambridge and Lincoln on the same day. Portsmouth and Eastbourne on the southern coast may also hit -5C, while temperatures in London and Surrey are slightly higher at -4C on Wednesday.

Northern regions including Northumberland and Edinburgh, in Scotland are expected to be milder at -3C.

Snow probability charts from WXCHARTS also show eastern and northern Scotland turn blue and purple on Wednesday, meaning there could be between 20- to 50 percent chance of snow next week.

Brian Gaze, forecaster at Weather Outlook, questioned whether there could be a “surprise” snow event. 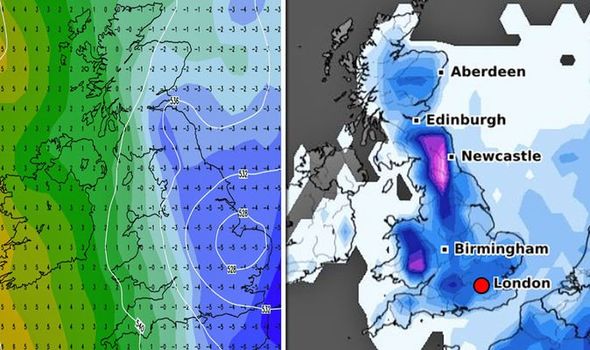 He then added in his weekly forecast: “Saturday starts with heavy showers in northern and western areas. Over high ground some of them are falling as sleet or snow.

“This morning sunny spells develop but showers continue, particularly in the west.

“Through the afternoon some heavier ones push eastwards, possibly bringing hail and thunder. In strong and blustery winds it feels quite cold.

“Tomorrow heavy outbreaks of rain in the northwest push southeastwards and become more showery. Ahead of them in much of southern and eastern Britain it should remain dry until late in the day. 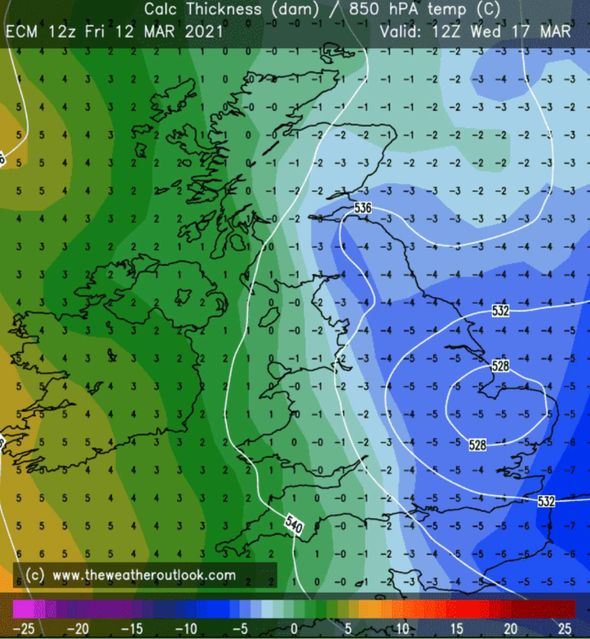 “Monday could bring scattered showers but much of the country has a dry day with variable amounts of cloud.

“Tuesday and Wednesday are looking mainly dry, but isolated showers are possible. In eastern Britain, it probably stays quite chilly but the west has milder conditions.”

The forecast said: “Saturday will have blustery showers, mainly across the north and west, some of them briefly heavy with a risk of hail and thunder. Northern high ground will have sleet or snow showers. 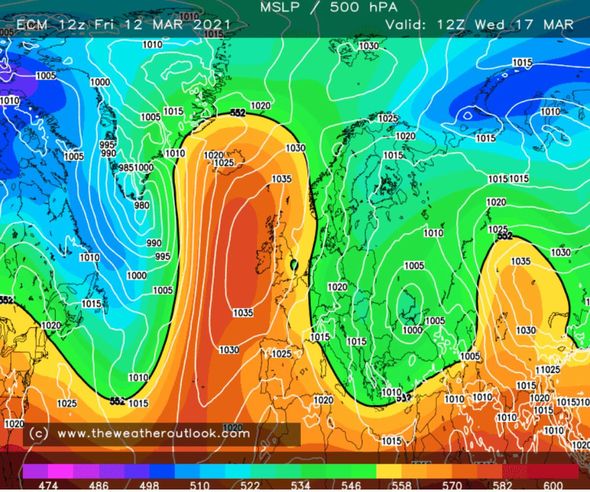 “Southeast and eastern England will be drier with sunny spells but a few isolated showers are possible.

“On Sunday, a new frontal system will move across from the northwest, bringing rain to all areas.

“Monday should be largely dry with just the odd isolated shower as a ridge of high pressure topples across the UK. However, this will be a rather weak feature, and a new frontal system will move towards Scotland and Northern Ireland, bringing rain during the evening with some sleet or snow for the Highlands.

“Overnight, rain will also spread across Wales and England, although it might not quite reach eastern and southernmost England. 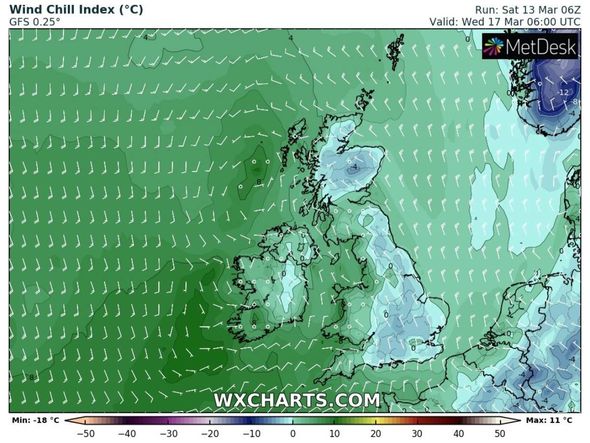 “During Tuesday, rain will reach all areas and it should linger across the eastern half of the country through to the evening. Northern Ireland, Wales, western Scotland and southwest England will become drier with some sunshine developing through the afternoon.

“Wednesday onwards will be drier with some sunshine as high pressure builds. Any patchy drizzle should die away and there will be some sunshine for most also a chance of overnight frost and fog patches.

“High pressure should gradually weaken, though, which might allow some rain to start moving in from the northwest on Sunday or Sunday night.

“An alternate scenario takes high pressure farther northwest, inducing colder north-easterly flows with wintry showers in the east, and this would be a 20-30 percent chance.” 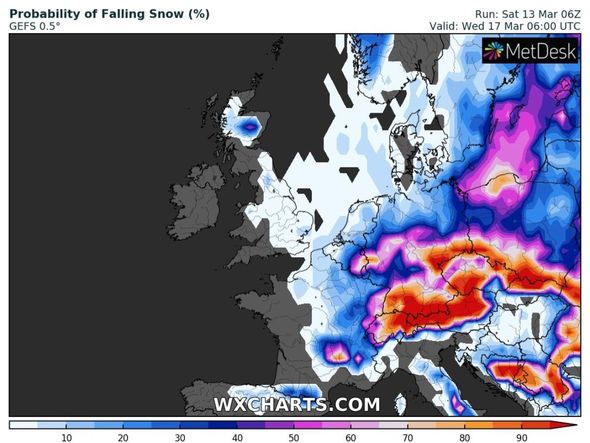 The Met Office also predicted “colder than average” temperatures over the next couple of weeks.

The forecast between Wednesday, March 17 and Friday, March 26, said: “There is a risk of morning frost and fog patches, particularly in the west.

“Temperatures potentially colder than average in the south, particularly the southeast, but likely milder across the north.

“The end of the period will most likely see another period of unsettled weather, with spells of rain and some strong winds crossing all parts of the UK, interspersed with drier and brighter interludes.

“Temperatures are expected to be at or slightly below average for this time of year by the end of the period.”