SOME Brits will enjoy “very warm sunshine” and highs of 20C today in a balmy start to the weekend.

But forecasters say that other areas will be drenched by “persistent” heavy rain – especially in Northern Ireland, Scotland and parts of northern England. 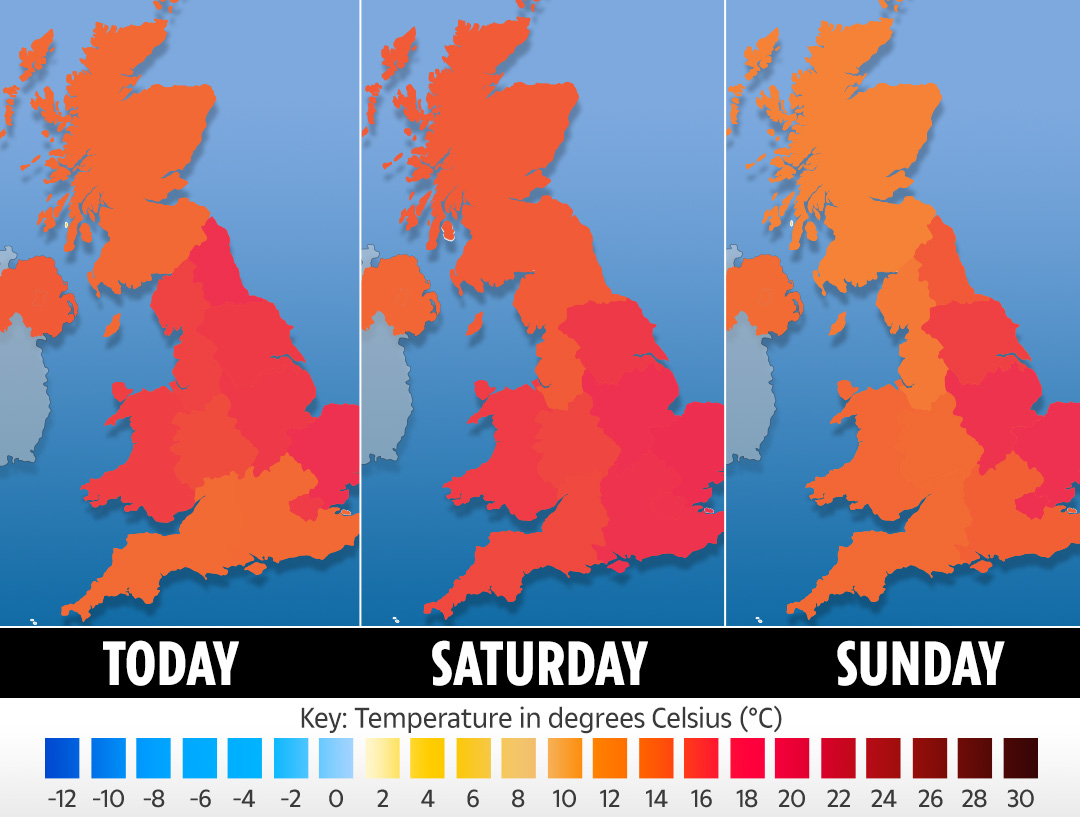 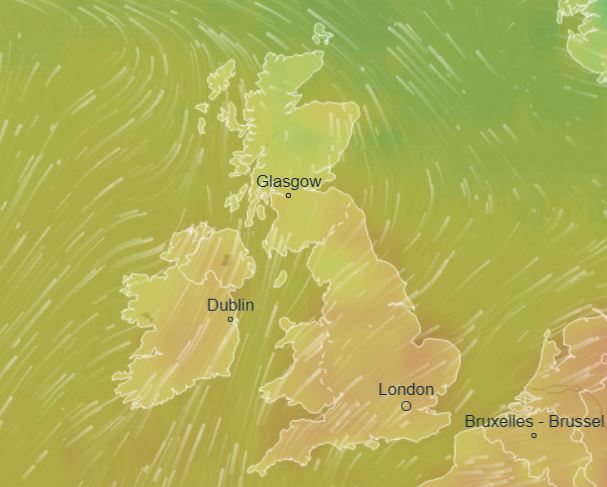 The Met Office said sunshine and pleasant temperatures would develop across England and Wales during the day.

Exeter is expecting to see the highest temperatures – which forecasters predicting it may reach 20C.

London and Norwich will also bask in 19C heat – whereas it will be around 10C in northern Scotland.

“It will be rather cloudy at first with outbreaks of rain affecting northern and some western parts,” a Met Office forecaster said.

“Sunny spells developing across England and Wales. Feeling very warm in the sunshine.

“Rain will become persistent and heavy at times, especially across western Scotland later.”

A spokeswoman for the Met Office said much of the country will enjoy balmy weather on Saturday – and Sunday could be even hotter.

Temperatures are then expected to jump and reach 27C in central regions and the south east.

The weather forecaster said: "If that does happen, it'll be the hottest day of the year.

"So far, April 19 holds the record, when temperatures reached 25.8C in Cornwall.

SWITCHCRAFT is a free service that finds you the right energy deal – and you could save an average of £219 a year.

A fiver will be paid into your bank account within four months of completing the switch. prepayment meter customer customers will receive a £5 Amazon voucher. Open to those 18 and over. UK residents only. Click here for full T&Cs.

"Before then, things will be changeable. There'll be sunny and wet spells tomorrow.

"This will be followed by much of the country experiencing cloudy and rainy conditions on Wednesday and Thursday.

"But it will feel considerably warmer on Friday and, by Saturday, temperatures are expected to be in the low to mid twenties throughout the UK."

But the weekend of hot sunshine will only last until Monday when the mercury takes a nosedive again, the Met Office has said.

After a few days of blazing sun, temperatures are then expected to plummet for a "fresh" start to next week.

Meteorologist Greg Dewhurst told the Sun Online: "Over the next few days it will get warmer and warmer, but it doesn't look like it will last long.

"From Monday it will be a lot fresher again, dipping back to the mid to high teens."

Meteorologist Grahame Madge said there remains uncertainty as to the range of temperatures for the coming days as weather forecasters wait for the warm air to arrive.

He said: "The indication is that we could see highs of 28C, isolated highs of around 28C, on Saturday.

"The most likely candidate places for those would be places like Norwich, North London, those sorts of areas away from the coast, but in the south east corner of the UK.

"And on Sunday we could see highs of 29C, even possibly 30C.

"So Sunday looks very much as though it's going to be a warmer day than Saturday.

"So we have got that warmth coming through.

"Once this warm front, and the air behind it, starts to pull across the UK then we will see temperatures starting to rise."

The Met Office spokesman said there will be a "fundamental change" once the warm front – known as tropical maritime air – starts to draw the warmer air across the UK later this week.

Mr Madge added: "It will work its way across, reaching all parts of the UK by later in the week and the weekend.

According to the Met Office website, Barcelona and Ibiza will see highs of 24C (75F) on Sunday, while St Tropez is expected to reach 28C.

Ladbrokes are offering 10/11 odds that the hottest day of the year so far will be recorded this week.

A spokesman for the betting firm said: "Things will only get hotter over the next few days so it's brollies away and beach towels out with a scorching weekend on the way." 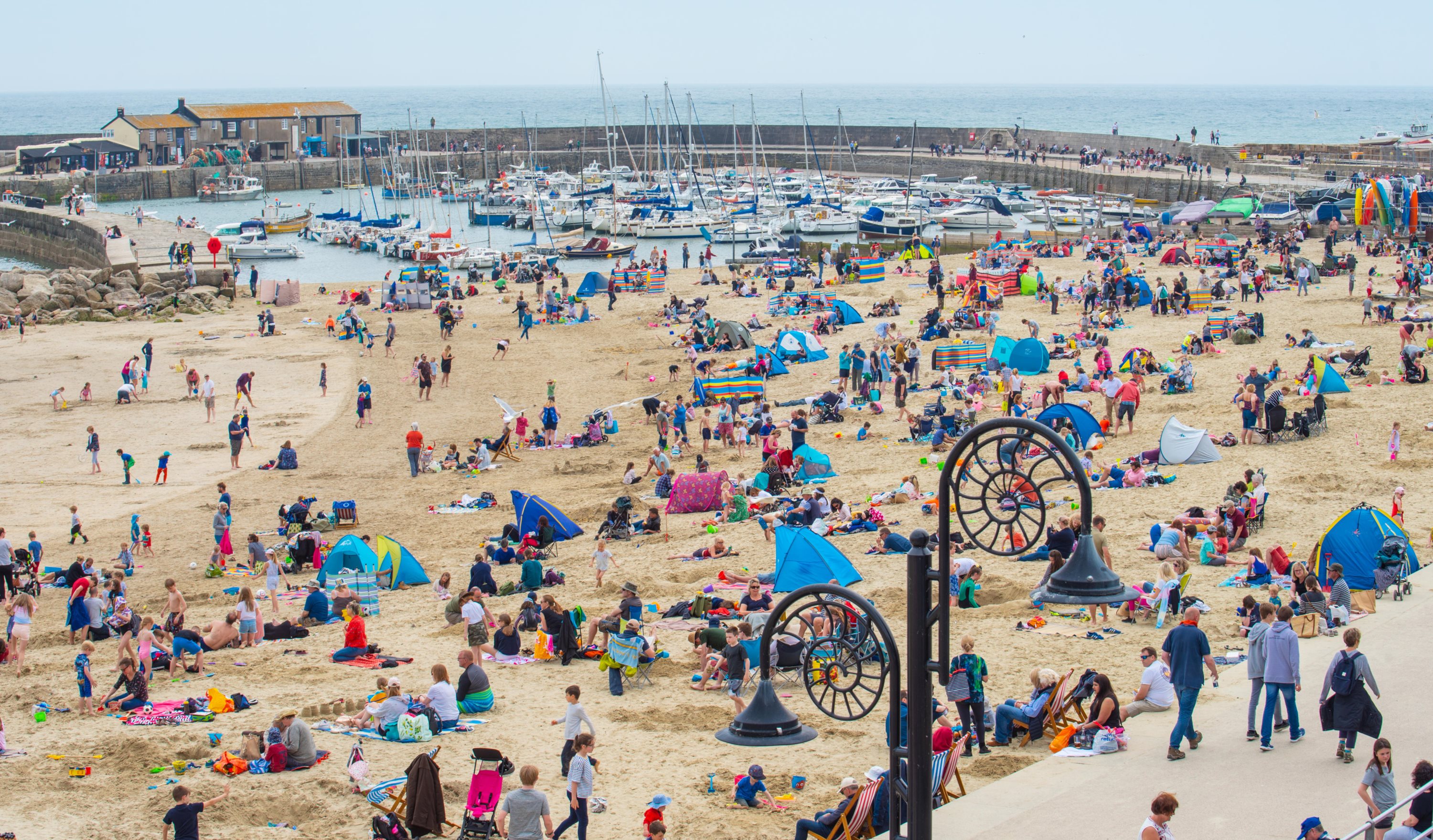