That’s more like January! Temperatures will plummet to -4C from tomorrow after record breaking warm spell over New Year – with snow and 70mph gales set to hit the north and nearly 50 flood alerts in place

After a record mild start to 2022, conditions in Britain will be rather more seasonal this week as temperatures fall to as low as -4C (25F) and stormy weather brings 70mph winds along with up to six inches of snow.

The UK is braced for widespread frost in the coming days with the mercury expected to drop to below average for January in some places – and the Met Office warned ‘anything could happen’ with snow drifts in Scotland.

Rain is forecast to move southwards today bringing colder conditions, but some parts of England and Wales could still see temperatures of 12C (54F) this afternoon before temperatures plunge from tomorrow onwards.

An overnight chill of -3C (26.6F) will hit most of the country by midweek bringing frost and icy road conditions in the morning, with temperatures falling a degree further to -4C (25F) in parts of Scotland on Wednesday.

A flood risk also remains in dozens of areas across Britain after torrential rain last week, with nearly 50 alerts or warnings in place – including 30 alerts in England; six alerts and four warnings in Scotland; and six alerts in Wales.

The balmy weather ended in downpours for many yesterday, with the Met Office issuing a yellow weather warning for ‘a band of heavy showers and thunderstorms’ moving ‘quickly eastwards’ across southern England.

And that came after the country’s mildest New Year’s Eve on record last Friday when Merryfield in Somerset reached 15.8C (60.4F), beating the previous high of 14.8C (58.6F) set in 2011 at Colwyn Bay in North Wales. 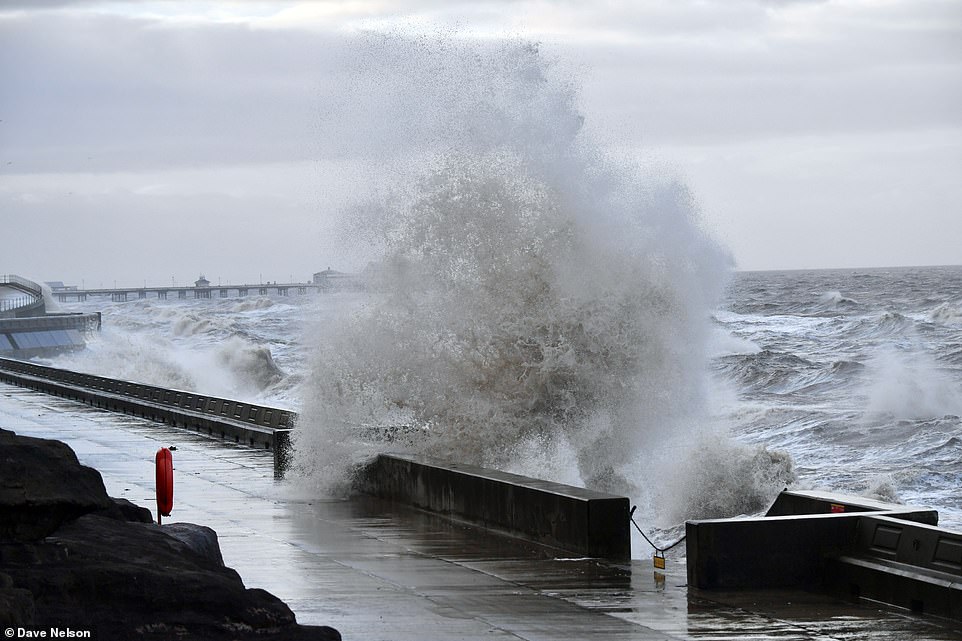 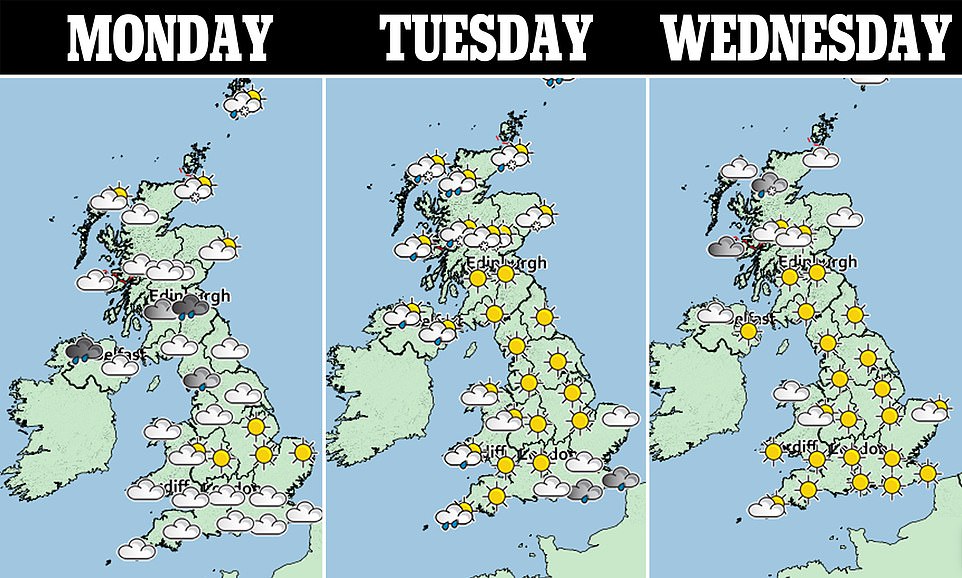 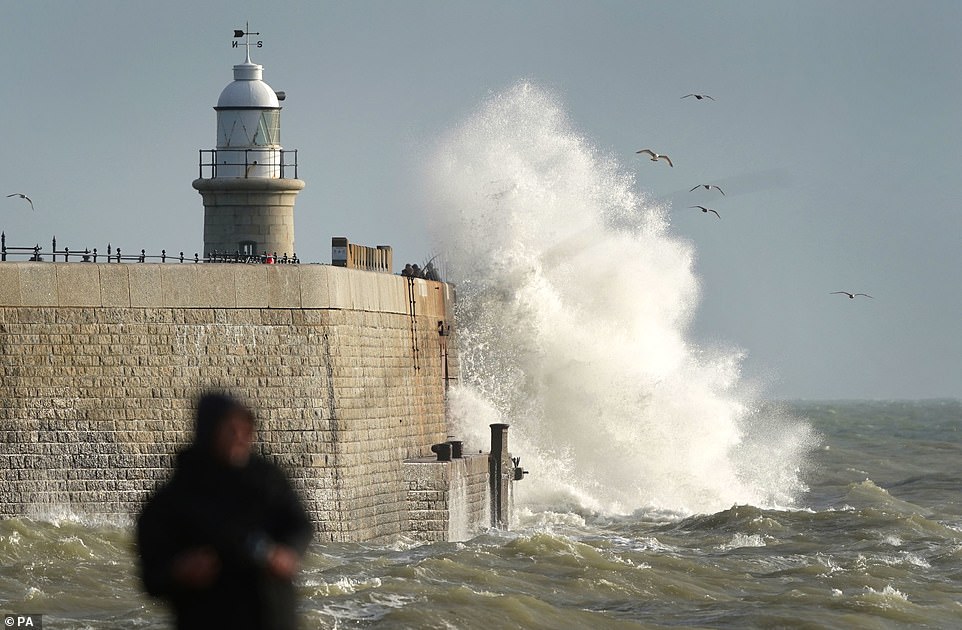 A fisherman on the beach in Folkestone, Kent, as waves crash against the harbour wall during strong winds yesterday 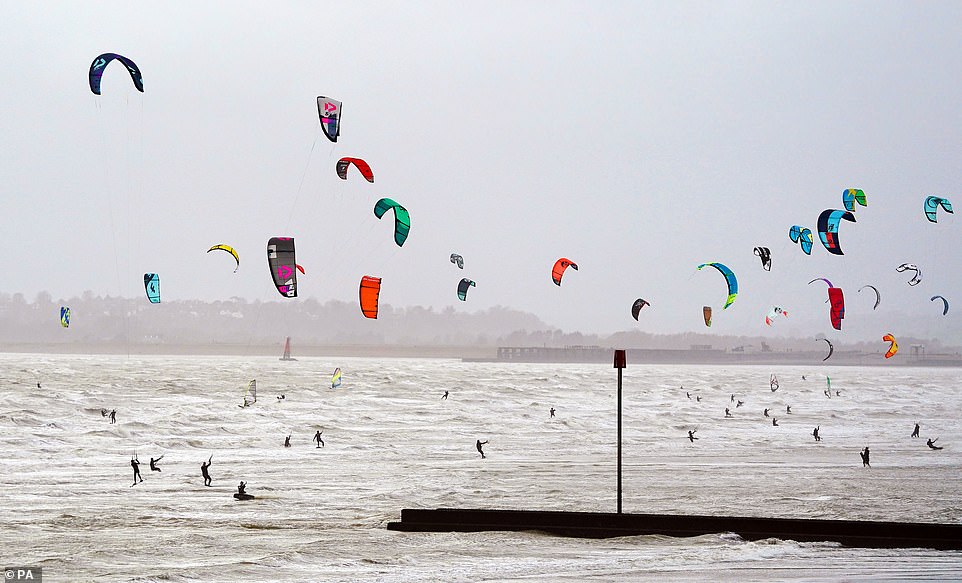 Kite surfers enjoy the strong winds on the beach in Camber, East Sussex, yesterday before conditions turn much colder 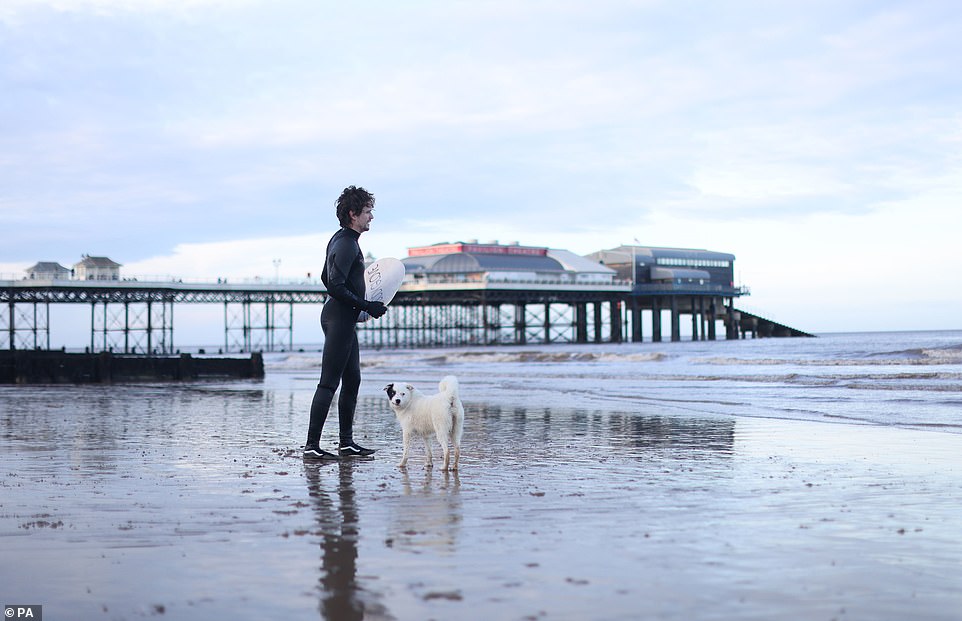 Warm subtropical air flowing from the Azores had pushed temperatures into double figures last week at a time of year when they usually reach no more than 7C (45F). 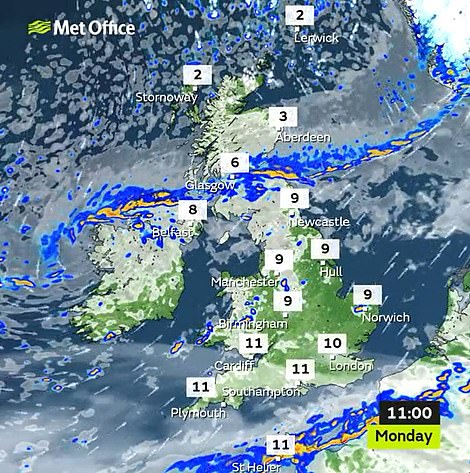 ‘On Monday, Tuesday and Wednesday the temperature will drop to average or below average with widespread frost becoming an issue.

‘Fairly heavy snow is due to hit the Scottish Highlands, bringing blizzard conditions. There’s also a chance of snowfall in the Pennines and North Wales, so compared to the last few days it is quite a contrast.’

Snow and strong winds may cause difficult driving conditions on higher routes in Scotland and bus, ferry and train services could also be affected, with trips taking longer or being cancelled.

It is feared winds of up to 70mph could whip up snow into blizzard conditions. Drifting snow is also predicted on higher routes in Central, Tayside and Fife, Grampian, Highlands and Islands and Orkney and Shetland.

Delays for high-sided vehicles on exposed routes and bridges are possible. People have also been warned to keep away from sea fronts, which are likely to be battered by high waves and spray.

Simon Partridge, of the Met Office, said: ‘After a weirdly-warm New Year, January is going to make an entrance with a bit of a bump. Thirty hours is a long time for a weather warning to be in place – the whole of Tuesday and up to 6am on Wednesday. 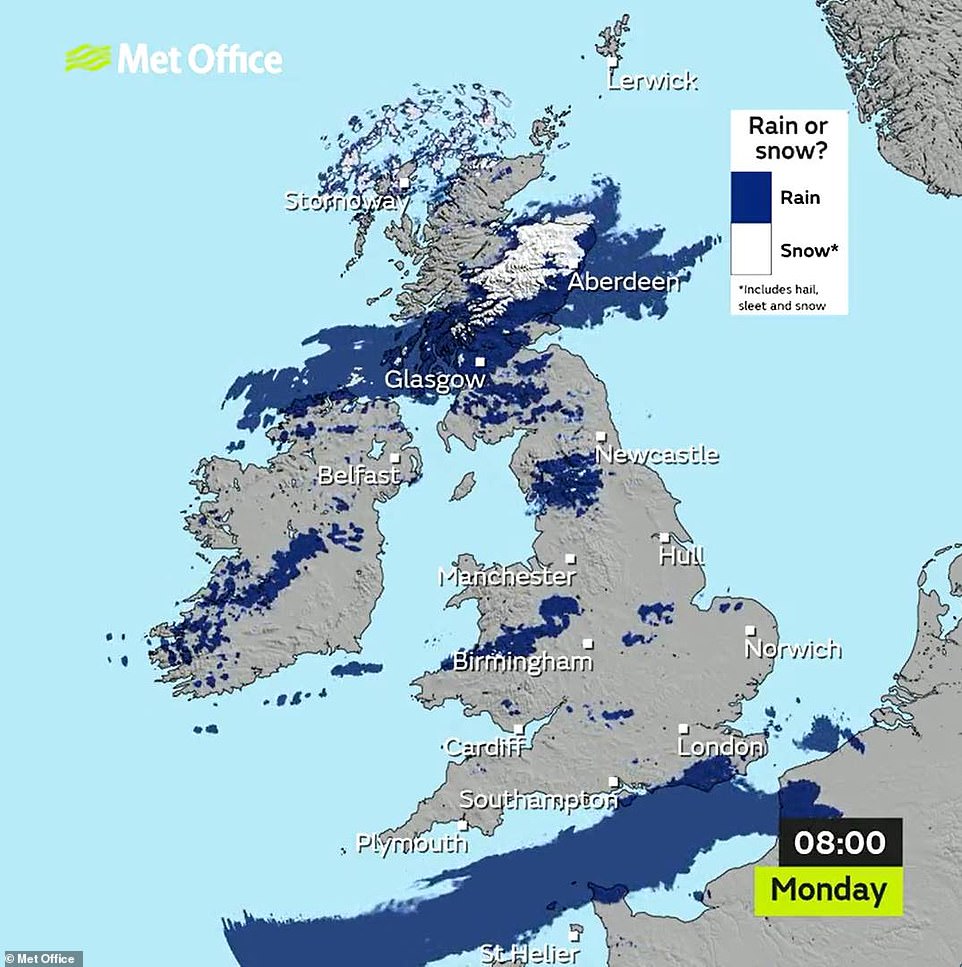 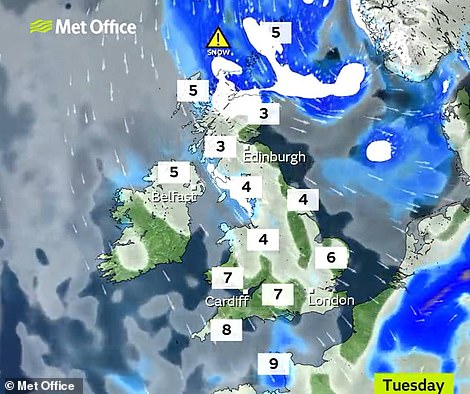 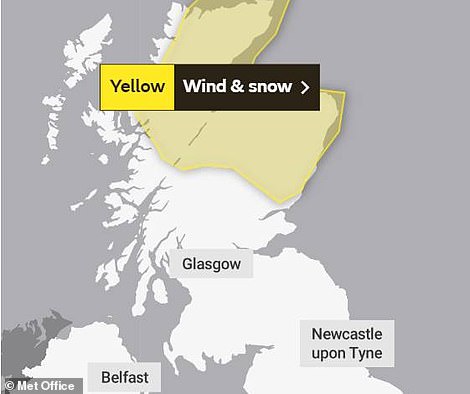 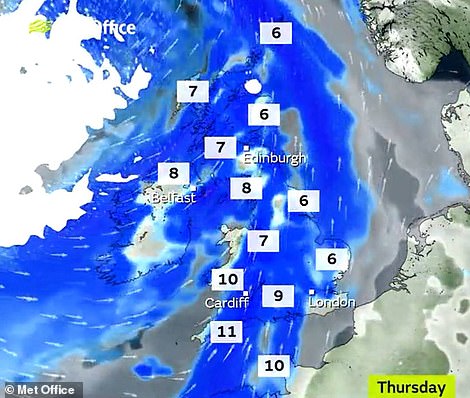 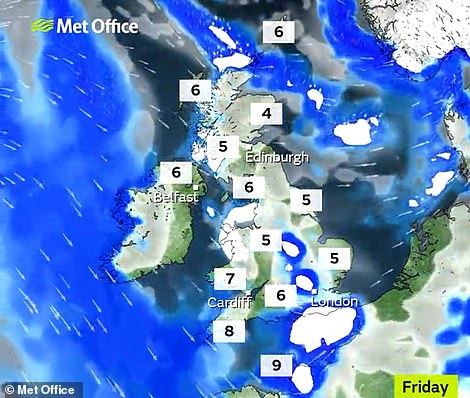 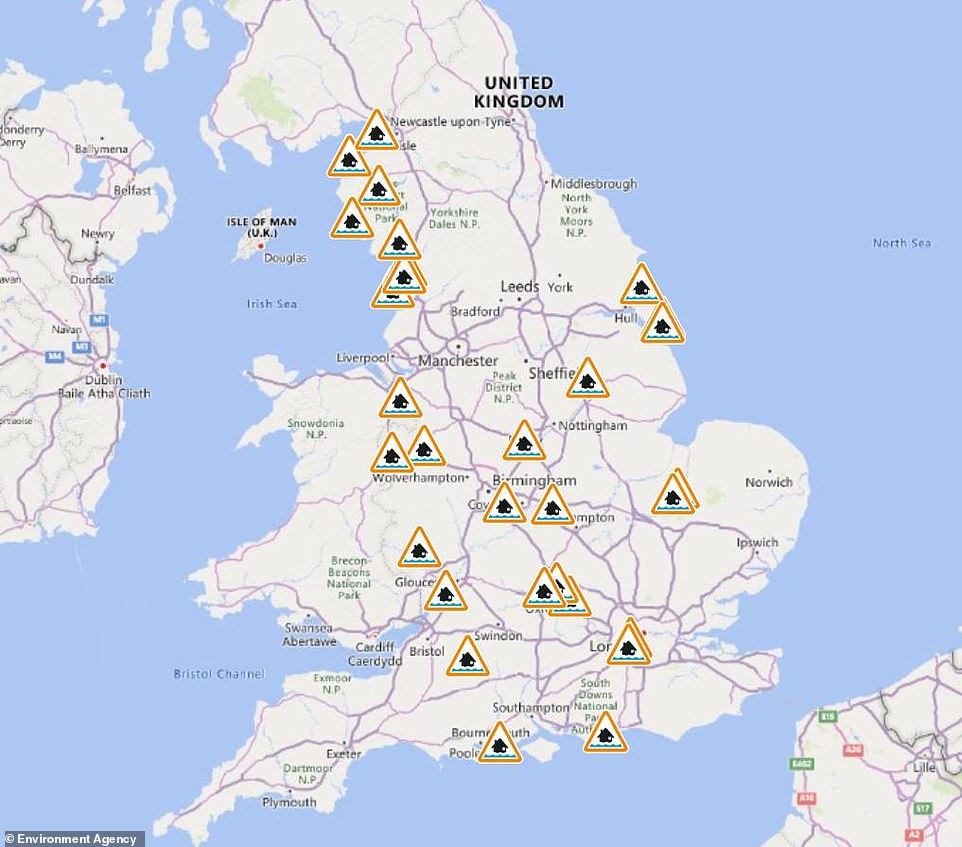 A flood risk also remains in dozens of areas across England after torrential rain last week, with 30 alerts in place today 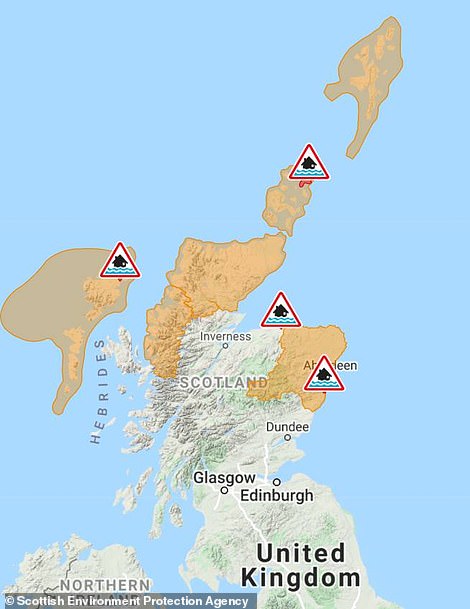 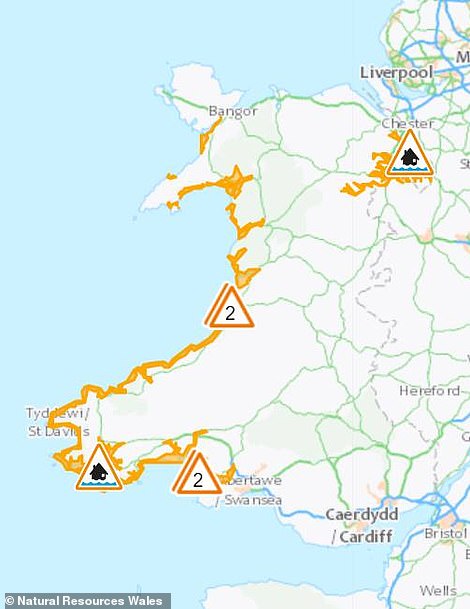 ‘Some ferries will be cancelled by the wind but the main concern is the poor visibility on the roads. Once snow starts to drift, anything can happen. People really need to take care in the warning area.’

Downpours also struck the southern Pennines, bringing tricky driving conditions. But a temperature of 12.7C (54.9F), which is well above average for the time of year, was reached in Writtal, Essex, yesterday.