One man has died, thousands may be without power for up to a week and residents of one Gippsland town have been evacuated after wild winds and rain caused havoc across most of Victoria.

The Dandenongs, large parts of Gippsland and towns north of Melbourne, including Trentham, were among the areas hit the hardest by the wild weather, resulting in 6700 requests for help from the State Emergency Service over a 24-hour period, its busiest day on record. 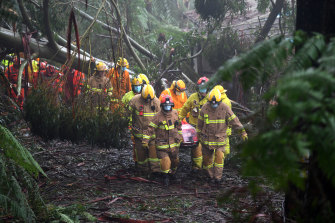 Police walked more than 1.5 kilometres through the storm to rescue the pair, delivering them to paramedics at Sherbrooke.

In Trentham, one resident said the town, which was left without power and cut off by felled trees, looked like a cyclone had torn through.

Residents of the town were also advised on Thursday not to drink tap water after 7pm because the storm had affected access to a water treatment plant and a burst water main. 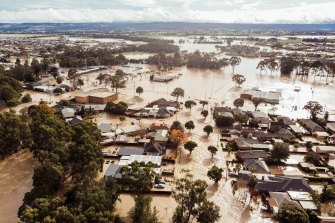 An aerial view of flooding in the township of Traralgon in Gippsland. Credit:Blake Bourne

Utility company Coliban Water said in a statement that the advice was precautionary, but told all residents “do not drink tap water until further notice”. It also warned them that “boiling water will not remove any potential contaminants that may enter the distribution system if there is pressure loss in the system”.

Baw Baw Shire deputy mayor and proprietor of the Star Hotel in Walhalla, Michael Leaney, said his town was cut off by fallen trees and was without power or mobile reception. A historic structure dating back to the gold rush era had also been demolished.

Speaking via a satellite connection, Cr Leaney said it would take some time for the trees to be cleared. “These are not little sticks,” he said. “These are massive trees.”

By 6pm Thursday night, major flood warnings remained in place for the Traralgon Creek, Thomson River and parts of the Yarra River, from Millgrove to Coldstream.

The Bureau of Meteorology said the wet weather is set to continue, confirming forecasts for between 20 and 30 millimetres of rain in coming days.

“Flood-impacted areas of Gippsland are likely to see further rainfall on Friday and into Saturday,” forecaster Matthew Thomas said.

AusNet Services spokesman Steve Brown said power was disrupted to more than 200,000 businesses and households with 157,000 customers – many of whom were still working from home under coronavirus restrictions – still without electricity.

He said it could be up to a week before some of them had their power fully restored. 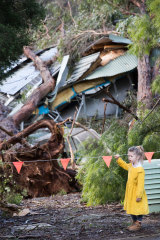 Mirrah, 6, looks at the damage after three huge trees landed on the roof of the Monbulk Aquatic Centre, where she was planning have her birthday party next week. Credit:Jason South

“There are still areas we can’t get into to work out how bad the damage is.”

Powercor confirmed electricity had been restored to 70,000 customers, but 20,000 were still without power on Thursday evening, many of them in Kyneton, Gisborne and Woodend.

In Traralgon, Friday Cullen watched the water climbing up the fence of his home while sitting in a State Emergency Service truck waiting to be driven to safety on Thursday morning.

The Traralgon Creek is normally about two blocks from Mr Cullen’s house but the floodwater was in his street and was expected to continue rising.

“It came straight up out of nowhere,” he said.

Mr Cullen does not know what happened to his car, but when he evacuated with his wife the water had already reached the top of the tyres.

“About 10 streets at least were evacuated,” she said.

Other residents remained on alert on Thursday and there had also been some flooding in the nearby town of Morwell.

A relief centre has been established at the Traralgon basketball stadium, which was triaging evacuees to determine whether they needed ongoing support or assistance with accommodation.

About 70 kilometres away, in the South Gippsland town of Woodside, a rescue team recovered a man’s body on Thursday afternoon after members of the public reported a vehicle almost submerged in flood waters. The man is believed to be aged in his 60s.

In Olinda, Sharon Sykes was counting herself lucky after a huge tree fell on her neighbour’s house causing extensive damage.

“There are trees down everywhere,” she said. “It’s like everywhere you go it looks like some huge force of nature has come through and destroyed a lot of our neighbourhood.” 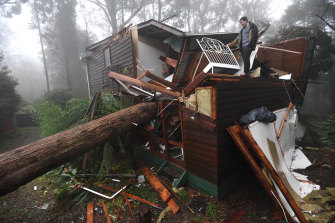 James Pickford was lucky to escape after a large tree smashed through his bedroom, missing his bed by less than a metre in Olinda. Credit:Joe Armao