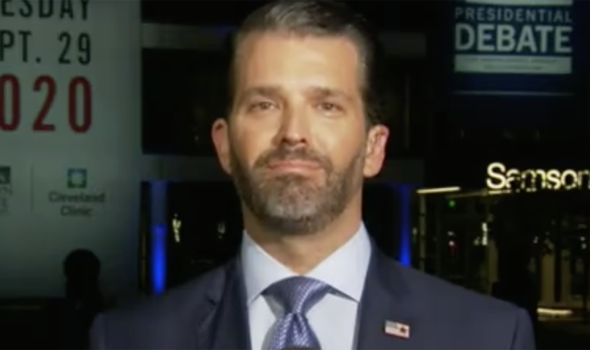 The Trump son made the remarks in an interview with ABC News ahead of the election debates. Donald Trump Jr also attacked Mr Biden’s record as a senator and defended his father over recent controversy around his tax returns.

He said: “He’s been a DC swamp creature for half a century.”

He also directed attacks at Hunter Biden over a conspiracy the Biden family are linked to China.

Mr Trump added the media does not talk enough about Mr Biden’s previous actions as a senator, and said “we’ve got to talk about record.”

Referencing the bombshell report from the New York Times claiming the President only paid $750 in taxes for 2016 and 2017, Mr Trump launched another attack on Mr Biden.

He added: “The reality is this, if people have a problem with the tax code, talk to Joe Biden.

“He’s the guy who’s been legislating these thing for 47 years.”