The US Open field continues to dwindle. Daniil Medvedev’s shocking loss to Nick Kyrgios proved no one is safe as the round of 16 continues Monday.

On the women’s side, No. 1 Iga Swiatek nearly went the way of Medvedev, but rallied to defeat Jule Niemeier. Jessica Pegula came through early against Petra Kvitova, but Danielle Collins has a tough task with No. 6 Aryna Sabalenka in front of her.

On the men’s side, American Frances Tiafoe put away Rafael Nadal to reach the quarterfinals. Carlos Alcaraz has the late-night match against Marin Cilic. The first match of the day was exciting, as No. 7 seed Cameron Norrie was upset by No. 9 seed Andrey Rublev to open the day.

Keep it here for all the news, highlights and updates from Day 8 of the US Open.

Rafael Nadal’s run at the U.S. Open is over.

We’ve been waiting for this moment. 🇺🇸 pic.twitter.com/KcNvqQzMr3

“I’m beyond happy, I’m almost in tears,” Tiafoe said on the court. “I can’t believe it. He’s definitely one of the greatest of all time. I played unbelievable tennis today, but yeah I really don’t know what happened.”

The tone was set early in this one, as Tiafoe and Nadal traded games in the first set. Tiafoe got stronger as the set went on, eventually winning 6-4.

There was a 10-minute break between the first and second set while Nadal got his wrist taped up. That didn’t throw Tiafoe off his game, at least not at first. Tiafoe and Nadal again traded games early. This time, however, it was Nadal who got it together late. He took the second set 6-4.

That set up the third set. Tiafoe remained a fierce competitor, keeping things close early. Through five games, Nadal led 3-2. Tiafoe battled back in the sixth game of the set, hitting an ace to tie things up at 3-3. Tiafoe then won the next two games, taking a 5-3 lead over Nadal before he quickly closed the set out.

Nadal bounced back quickly in the fourth set, taking a 3-1 lead before the roof at Arthur Ashe Stadium was closed due to rain. That lead, however, disappeared almost instantly. Tiafoe won three straight games to retake the lead.

He picked up his fourth straight win, holding on after nearly dropping his early lead, to go up 5-3. From there, Tiafoe quickly put the 22-time major winner away to win the match in just more than 3 1/2 hours.

Have a moment Frances Tiafoe!#USOpenpic.twitter.com/egoIVDoRWh

“I played a bad match and he played a good match and that’s what happened … He was better than me,” Nadal said simply, via Adam Zagoria.

The women’s No. 1 seed got off to a rough start against Jule Niemeier on Monday. Iga Swiatek couldn’t get into a rhythm early, falling to Niemeier in the first set 6-2.

Swiatek uncharacteristically made unforced errors. She expressed her frustrations after the first set, putting a towel over her head and hitting a chair with her hand in between sets.

The second set didn’t go well either. Swiatek managed to take the win 6-4, but it was a sloppy effort. Swiatek continued to make errors that kept Niemeier in the game. Swiatek was calmer in the second set, but still had moments of frustration as she moved past Niemeier.

By the third and final set, Swiatek finally managed to settle in. She jumped out to a 4-0 lead over Niemeier to open the set. Swiatek managed to take the final two games, winning the final set and match 6-0.

She completes the [email protected]_Swiatek secures her spot in the quarterfinals. pic.twitter.com/xs2WQ0KMpT

Swiatek still looked shaky at times, but Niemeier’s mistakes started to pile up as the match went on. She had 13 doubles faults during the match.

With the win, Swiatek moves to the quarterfinal of the US Open for the first time in her career. She will take on Jessica Pegula on Wednesday.

Karolina Pliskova gets past Azarenka

It certainly wasn’t easy, but Karolina Plinskova is headed to the quarterfinals once again.

Plinskova nearly got away with the win in straight sets after she took a 4-2 lead in the second set following a tight battle in the first. Azarenka, however, rallied back to force a tiebreak, which she held on to win and extend the match.

Pliskova, though, took off in the third. She flew ahead to a 3-1 lead before holding on to take the 6-2 win and secure her place in the quarterfinals — marking the 10th quarterfinal appearance in a grand slam of her career.

It took him a full five sets, but Jannik Sinner is headed to the quarterfinals for the first time.

21-year-old Jannik Sinner has reached the quarters of every major tournament. pic.twitter.com/yHcntJBXqB

Sinner got off to a hot start, and seemed poised to end the match early after cruising in the first set and taking a 3-1 lead in the second. Ivashka, however, rattled off four wins in the next five games to suddenly take the lead — which he used to win the set, 7-5.

Sinner rallied with a quick win in the third set after opening 3-1, but Ivashka then opened with a 3-1 lead of his own in the fourth set before he held on to win and force a fifth.

We will have a day session match go past midnight in Louis. 🌕

Ilya Ivashka sends his battle with Jannik Sinner to a fifth set! pic.twitter.com/wVrNHspX70

Though Ivashka jumped out to another 3-1 lead in the final set, Sinner won five straight games to flip the momentum right back and end the match.

American Jessica Pegula is moving to the quarterfinal. Pegula cruised to a win over Petra Kvitova in the round of 16 in straight sets (6-3, 6-2).

Things were tight early, and Pegula and Kvitova traded games. Play eventually stopped due to rain. At the time, Pegula led the first set 4-3. The time off, which was roughly 45 minutes, appeared to help Pegula. She took the next two games from Kvitova, winning the first set 6-3. 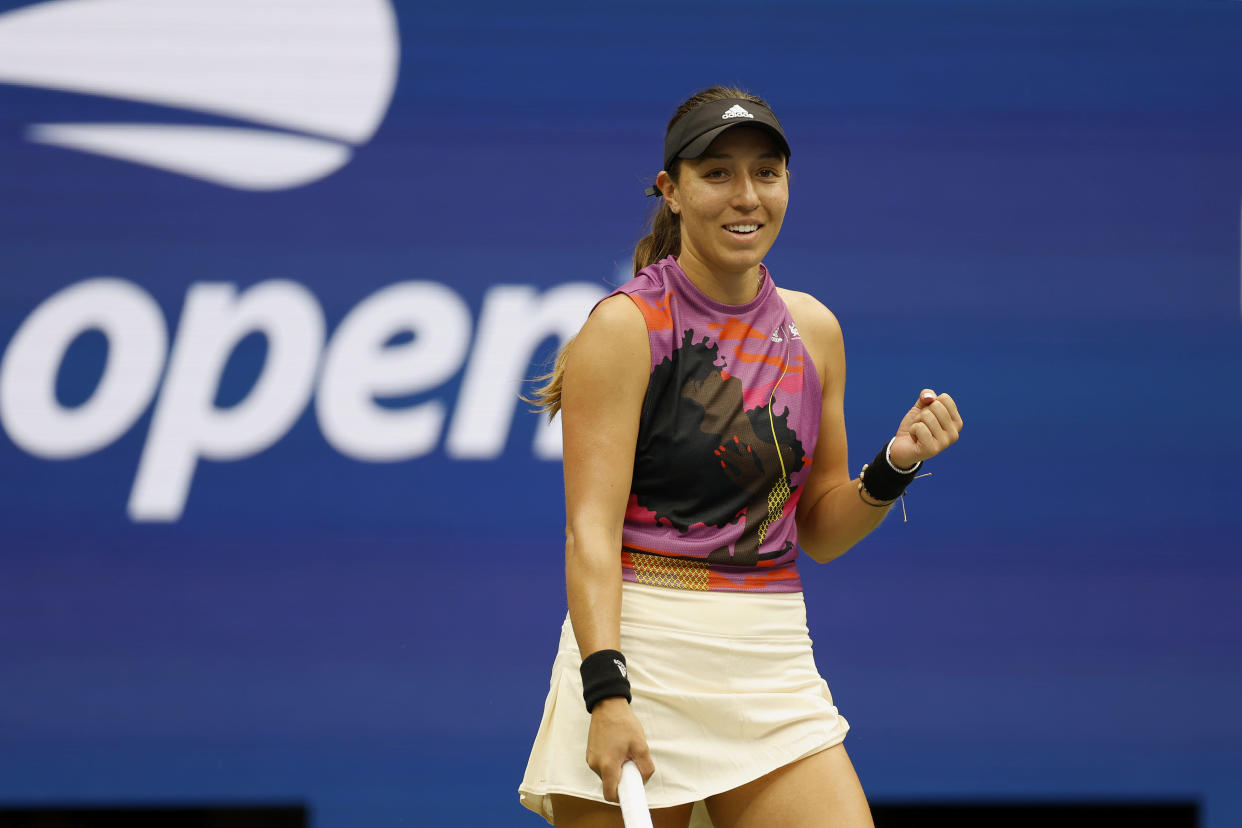 Kvitova seemed to recover in the second set, taking the first two games from Pegula. From there, though, Pegula found her stride. She took six straight games from Kvitova, taking the match 6-2. It was the first time in her career Pegula defeated Kvitova.

Pegula played a mistake-free match and forced Kvitova into several errors. Kvitova finished the match with five double faults, which did not help her comeback hopes.

With the win, Pegula advanced past the third round of the US Open for the first time in her career.

Danielle Collins seemed poised to become the fourth American to reach the quarterfinals at the US Open on Monday night.

Aryna Sabalenka, despite a slow start, had other plans.

Sabalenka rallied back to beat Collins 3-6, 6-3, 6-2 in the fourth round of the tournament and secure her spot in the quarterfinals.

Sabalenka soars into the quarterfinals for the second straight #USOpenpic.twitter.com/h35vGzlfH1

Sabalenka fell down early, dropping the first set and opening the second in a 3-1 hole. Sabalenka, however, rallied back and fought through two incredibly long game points to jump back up 4-3. From there, she never looked back.

Sabalenka quickly closed out the second set to force a third, and then pushed ahead to a quick 4-1 lead of her own. From there, the Belarusian cruised to the win and her second-straight quarterfinals at the US Open.

The first match of the day was a fun one, as Norrie and Rublev duked out some tight sets early. Both players traded games in the first set, but Rublev eventually pulled away, winning 6-4. At one point in the first set, the two traded a 35-shot rally, the second longest of the tournament.

Things followed a similar script in the second set. Norrie and Rublev traded games back and forth. The humidity was severe, causing Norrie to swap his sweat-drenched yellow shirt during the match. Rublev faced adversity in the second set. While leading, the set came to a halt after it started raining on the court. Both players retreated under umbrellas while the roof was closed at the stadium. Rublev wasn’t shaken by the delay, eventually taking the second set 6-4 once things resumed.

The third and final set following a similar script. Norrie and Rublev traded games early before Rublev pulled away at the end and picked up the win 6-4.

Out here on Armstrong Andrey Rublev takes out Cam Norrie in straights and will get the Nadal / Tiafoe winner pic.twitter.com/zyjJKnm05k

Rublev had his serve working throughout the match, racking up 11 aces. Norrie struggled with unforced errors, which likely led to his downfall. 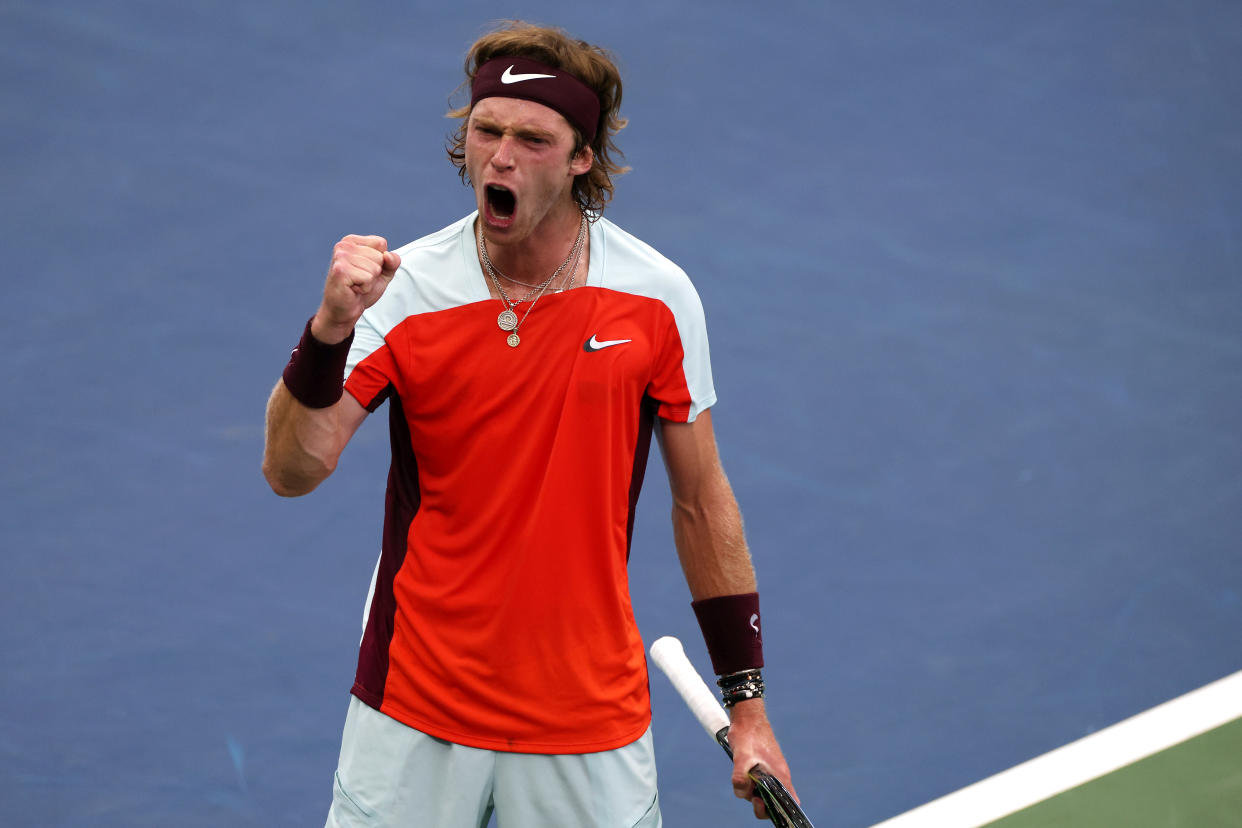