Vatican City: The Vatican and the Australian Catholic Church have both denied knowledge of transfers worth US$1.8 billion ($2.3 billion) which Australia's financial watchdog says have been sent from Rome to Australia in the past seven years.

"That amount of money and that number of transfers did not leave the Vatican City," a senior Vatican official with knowledge of the city-state's finances said on Wednesday, local time.

The official, who spoke on condition of anonymity, said the Vatican would be seeking details from Australian authorities on the specific origin and destination of the money. 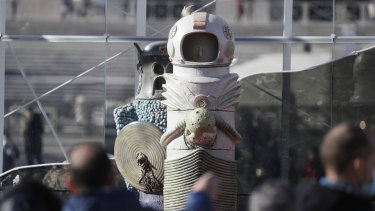 "It's not our money because we don't have that kind of money," he said. "I am absolutely stunned."

The figures were made public in December by the Australian Transaction Reports and Analysis Centre (AUSTRAC) in response to a parliamentary question by Australian Senator Concetta Fierravanti-Wells, and first reported by the newspaper The Australian.

They involved about 47,000 separate transfers, according to AUSTRAC.

Archbishop Mark Coleridge of Brisbane told Reuters the Australian Church was not aware of any such transfers: "I can assure you that no diocese or other Church entity saw any of the money."

Fierravanti-Wells had asked what funds had been transferred to Australia "from the Vatican or any of its entities, or individuals associated with the Vatican or Vatican entities" since 2014.

The official in Rome said the Vatican had around 100 legal entities, including hospitals and the like, "but they don't have that kind of money".

In an email to Reuters on December 24, AUSTRAC said it had no further comment. On Thursday, in a further email, it said it could not comment on the specifics of this story before next week.

Two Vatican offices handle money transfers – its bank, commonly known as the IOR, and APSA, the Administration of the Patrimony of the Holy See.

The Vatican official said APSA had sent less than €800,000 to Australia since 2014, mostly for payment of salaries and expenses for the Vatican embassy, as well as pensions and travel costs.

Similarly, the money sent to Australia by the IOR for its clients, typically members of religious orders, was nowhere near the amounts listed by AUSTRAC, he said.

"The Holy See's entire yearly budget is about €330 million. The (AUSTRAC) figures are about four times that," the official said. "It seems like science fiction."

He said the Vatican wanted to find out if others had illegally used its name or that of a related entity to move money through banks in other countries.

Archbishop Coleridge said the funds had not been used for financial settlements with victims of sexual abuse or for legal costs related to Cardinal George Pell.

"Given the speculation that is rife, there is a need for clarification," he said.

Pell worked in the Vatican as its treasurer from 2014 to 2017, when he returned to his native Australia to face charges of historical sexual abuse.

He spent 404 days in jail before his conviction was overturned last April, and he is currently in Rome. He did not respond to a request for comment.