High-fee non-government schools have dominated this year’s VCE rankings, accounting for 27 of the 30 schools that performed best academically.

Haileybury Girls College topped the state for VCE results, with a median study score of 37 out of 50 and 37.2 per cent of students’ individual study scores at 40 or above. It is the first time the school has topped the rankings since The Age began collecting school performance data in 2003. 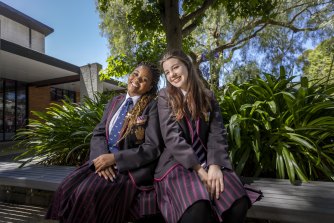 Haileybury – Victoria’s largest school with more than 4000 students across four campuses – has a “parallel education model” in which boys and girls attend school together but are mostly separated into single-gender classrooms from grade 5 onwards.

Founded in the 1890s, the independent school first accepted girls in 2000. Since then, girls have consistently outperformed boys academically at the school. Haileybury’s boys achieved a median study score of 35 this year.

Haileybury principal Derek Scott said the parallel model “gives us the opportunity to get the best academic outcomes for our girls and our boys and the best social outcomes”.

“It’s about encouraging students to take risks with their learning and there is plenty of evidence to show that that is very effective in single-gender classrooms compared to what might be there in a co-ed classroom,” he said.

“I feel like it’s also less distractions, less pressure because sometimes in classes with boys you just don’t gel well,” she said. “We hang out with the boys at lunchtime and recess and all that, but in class it’s really good to have all girls around you, and it’s a very supportive space.”

Year 12 graduate Harriet Pollitt said she had a difficult year coping with lockdowns and sometimes struggled with her mental health.

“There were times when I felt I couldn’t go on and it was all getting too much, but Haileybury has a really good support system,” she said. “Because of that I was able to push through and get an amazing result.”

Six other schools also achieved a median VCE score of 37, but had a lower proportion of individual study scores of 40 or more.

East Doncaster Secondary College was the top local-entry state school with a median of 33 and 16.7 per cent of student study scores at 40 or above.

Best-performing regional schools included the Alice Miller School in Macedon, an independent school led by children’s author John Marsden, which had a median of 35 and Goulburn Valley Grammar School in Shepparton with a median of 34.

All VCE students received individual consideration of educational disadvantage due to COVID-19 this year, which also influenced schools’ median results.

Victorian Curriculum and Assessment Authority chief executive Stephen Gniel said the process was even more detailed this year than in 2020. The authority considered students’ performance in school-assessed coursework, in the General Achievement Test and in exams and weighed that against what teachers expected the student to achieve, had their studies not been affected by the pandemic.