COVID-19 vaccine hubs with ultra-cold freezers to store the Pfizer vaccine will be set up in some of Melbourne’s major hospitals, the state government has announced.

The vaccine hubs will be led by the Austin, Western and Monash health services.

At least six centres will also be set up in regional areas, with potential hubs earmarked for Ballarat, Bendigo, Geelong, Albury-Wodonga, Sale and the Latrobe Valley, Health Minister Martin Foley has announced.

The state has now been free of local transmission of the virus for four weeks.

There are now 21 active cases in Victoria, with 16,142 test results received across Tuesday.

Outdoor dining will potentially be a feature of Melbourne’s hospitality scene for the next few months, with one major council potentially extending its outdoor program until May.

Councillors from City of Melbourne voted unanimously on Tuesday night to continue the outdoor dining program in the CBD, while a report is prepared on expanding the program for another two months.

A report on a short-term extension to the outdoor dining scheme until May 31 will be tabled at a council meeting on March 30. 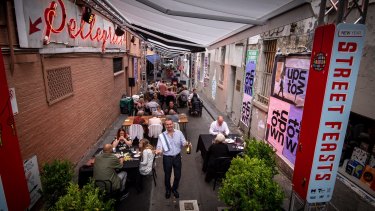 The City of Melbourne said in a motion moved last night that the program “had significant participation from businesses and has encouraged patrons back to hospitality venues at a critical time for the industry”.

On Tuesday night, City of Yarra also noted the success of the program at an ordinary council meeting. The municipality are now investigating an extension of outdoor dining, but no firm decision was reached.

The council said in its motion there had been “both positive and negative feedback” from members of the community on outdoor dining.

Since October 2020, City of Yarra has created more than 130 parklets for on-street dining, and approved an additional 150 permits for footpath trading.

The City of Yarra is now seeking feedback on the parklets from both business owners and customers.

Cottage inside the gothic abbey where Lord Byron lived up for sale for £480,000

Review: 'Raya and the Last Dragon' like a volcano of creative ideas in full eruption