There is still a strong need to combat Islamophobia in Australia, with the increasing presence of far-right white supremacist movements across the world, the vice-president of the Islamic Council of Victoria says.

The group’s Mohamed Mohideen said in 2017 he had started an annual mosque open day to “break down myths and negative publicity” about the Muslim community. 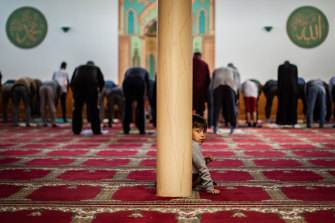 Prayer time at the Australian Bosnian Islamic Centre in Deer Park. The Mosque was taking part in the Islamic Council of Victoria’s Mosque Open Day on Sunday.Credit:Scott McNaughton

The motto of “open doors, open hearts and open minds” rang true on Sunday, as Victorian mosques opened their doors to the masses to break down stereotypes and mistruths about Islam.

With barbecues on and henna at the ready, 15 mosques from across Melbourne and regional Victoria took part, welcoming hundreds of people for tours and talks about the religion.

“We wanted people to come in, visit a mosque, meet people and realise Muslims are no different to any other Australians,” he said, noting that the places of worship are open to people from different religious or cultural backgrounds year-round.

“You’re most welcome to go to any mosque, any time and feel to ask any questions. No one is going to get offended – it’s better to get your concerns answered than just keeping it inside.”

The second anniversary of the Christchurch terror attack, where 51 people were killed by an Australian gunman at the Linwood Islamic Centre and Al Noor mosque, falls on Monday. Victorian mosques on Sunday held prayers for the people of Christchurch.

Earlier this month, a 27-year-old man was charged in New Zealand with making a threat to kill after allegedly posting a online threat against the Al Noor Mosque.

“Unfortunately Islamophobia is still here, there are still people who are not willing to accept a faith that is different to theirs or person with a different skin colour,” Mr Mohideen said.

“But there is lots of change and positives: people who come to our mosque say, ‘we always used to pass the mosque and had this fear to enter, but once we came in and saw it, we’re now regulars and know the community.’