A Southern Highlands organic food business has become a hotspot of rebellion against COVID-19 restrictions after a third consecutive day of charges related to apparent breaches of public health orders.

One of the owners and an employee of The Organic Store in Bowral were arrested for the second time on Saturday after police again visited the venue and found widespread failure to wear masks among 20 staff and customers. 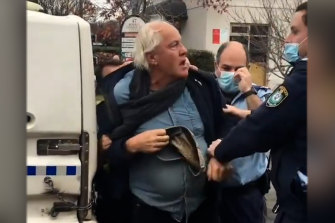 An organic food store and cafe in Bowral has become a hotspot of alleged COVID-19 breaches. Credit:Instagram

Around 11.45am, officers asked those inside the store to wear masks, but one of the owners, 62, and an employee , 43, “expressed they had no intention of complying” and were taken to Southern Highlands Police Station, NSW Police said in a statement on Saturday.

Both women were charged with not wearing fitted face covering in a business premises.

The owner, her husband, 63, and the employee were first arrested and charged during an incident on Thursday when police were alerted to potential breaches of public health orders.

The 62-year-old female owner was charged with hindering police in the execution of duty and failing to provide name and address and was issued with a notice to attend court for not wearing fitted face covering when indoors at a business.

Police took further action against the man on Friday, charging him for not complying with the no spitting or coughing direction. He was also issued with a $200 infringement notice for not wearing a mask inside the shop, according to police.

The Organic Store posted the footage to Instagram of the Thursday incident, with one of the owners being arrested and forcibly put in the back of a police vehicle.

In the caption of the video, the store wrote that police “forcibly arrested the owners without due cause”, but admitted the shop “takes a stand against the mandatory mask mandates”, claiming “masks are unhygienic and in an open food store, (organic store) it isn’t safe”. 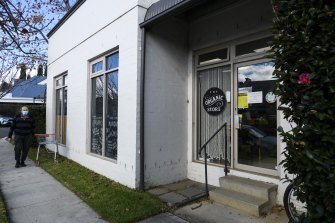 The owner of The Organic Store, Bowral and a customer were arrested after an incident with police. Credit:Rhett Wyman

The owners have been discouraging vaccines and masks, with a sign outside the shop stating: “to protect our customers and each other, if you have had any vaccine in the last 10 to 14 days please do not enter”.

On Thursday, the third woman – the employee – was issued with a notice to attend court for her failure to wear a mask and to provide a name and address. On Saturday, she was again charged for not wearing a mask.

All three people will face court in August for the alleged breaches.

“Most of the community understand the weapons we have in this war: QR codes, getting tested if you’ve been at a venue of concern or if you have symptoms … wearing masks,” he said.

“When you’re in a war, you don’t win it with wacko views … Unfortunately, we’re seeing that with some people, who think it’s OK not to wear masks.”

In other COVID-19 infringements across the state, seven people on the Central Coast have each been slapped with $1000 fines for breaching public health orders by allegedly gathering at an industrial estate to do burnouts.

NSW Police said the seven people at Tuggerah Lakes were issued with infringement notices for being away from their homes without a reasonable excuse after police were alerted to a gathering in an industrial estate.

“A group of people decided they would go to the industrial area and prepare their vehicles and the space around them for some sort of burnout activity,” Deputy Commissioner Gary Worboys said.

The notices issued to the five men and two women were among 78 handed out by police on Friday as the state government warned people against disobeying COVID-19 restrictions when the sun was out.

Premier Gladys Berejiklian said people’s good work in holding back the spread of the virus could be ruined if people relaxed over a weekend with nice weather.

“We’ve done so well so far, let’s not waste it because the sunshine is great,” she said.

The state’s Chief Health Officer, Dr Kerry Chant, said outdoor areas were lower risk and people should not be tempted to have guests in the homes.

“If you are cooped up and you have children, take them to a park, stay a distance from anyone else. Let them run around,” she said.

Our Breaking News Alert will notify you of significant breaking news when it happens. Get it here.