Meet the women carving out a niche subculture in extreme sports; these are Australia’s Strong Women. They’re fit, they’re fierce and they want women to find their inner Amazonian. 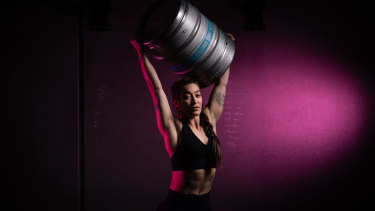 Mariko Whyte is one of four women who features in an upcoming documentary on ABC about the Strong Woman Movement.Credit:Eddie Jim

“I only knew guys who did it, I didn’t know any women who’ve done it before,” said 29-year-old Doncaster woman Mariko Whyte.

Six years ago Ms Whyte first heard that women were trying out Strongman, a type of strength athletics that stems from 19th-century circus performers who lift absurdly heavy items.

“I was like, what is this crazy sport? It sounds incredible,” she said. “You lifting heavy things, and you’re moving really fast and it seems so epic.”

Fast forward to today and Ms Mariko’s story is set to stream on ABC iView from August 1 as one of four women followed for a new documentary series, Strong Women. Filmed over three years, the documentary follows the rise of the sport which has seen a 500 per cent increase in female participation since 2015.

In the three-part series, viewers learn that Strong Women is not Ms Mariko’s first extreme sport. She speaks about a period of time in her early twenties when she became absorbed in bodybuilding – so much so she eventually developed body dysmorphia and the eating disorder bulimia.

The photos shown of her in the film at that time in her life are almost unrecognisable – she’s covered in fake tan, and clad in a bikini and heels to show off protruding abs.

“I just got addicted to seeing change in my body,” she tells The Sunday Age. “I was very strict. I was like, ‘how much more strict, can I be? I need to be so strict to the gram’. I would measure all my food and take photos of it.

“I almost went too far too deep and I didn’t know where to stop or find balance.”

For her, Strong Women meant a shift from an unhealthy obsession with the way her body looked, to focusing on what her body could do.

“There’s definitely a more relaxed mindset around eating,” she said. “ It’s shifted my focus from looking in the mirror to actually looking at the weights on the bar.”

The jaw-dropping feats are not without their risks – Ms Whyte has seen a woman at championship level crush her foot with a 120-kilogram concrete “Atlas stone”. At another Australian competition, she saw a woman snap her knee carrying a 300-kilogram “yolk” weight on her back. 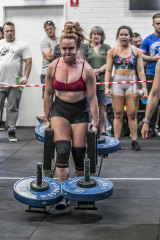 Kerryn Taylor competing during the filming of the Strong Women documentary.Credit:ABC

Despite the risks, Strong Women has been like therapy for the women in the documentary.

“A lot of the community that we do have… tend to have some sort of trauma or something that’s happened to them in the past or struggle that they’re trying to fight through,” Ms Whyte said.

Kerryn Taylor, another Victorian woman featured in the documentary, said she was proud of the role models the Strong Women Movement provides, particularly for younger women.

As the only Strong Women trainer in Geelong, Ms Taylor trains teens as well as women into their sixties and incorporates mental health sessions into her workshops, which are on hold due to COVID-19 restrictions . Across all age groups, she said, the shift in the minds of those who come through the door is powerful.

“I say to women, ’you know what? Those legs are what get you out walking every day, those arms are what carry your children. We just to have more of an appreciation for ourselves as women and as people in our bodies.“

If you or someone you know needs help with eating disorders or body image issues contact the Butterfly Foundation on 1800 33 4673.